The contents of the test tube aren’t turning yellow. What should I do?

This experiment requires boiling water, so it’s a good idea to first try replacing your water with hotter water. Leave the test tube for 10 minutes.

If this doesn't work, try mixing the contents of the test tube with a wooden stick and leaving the test tube in the boiling water for 10 more minutes.

Can I use one spoon to measure all of the reagents?

The experiment might not turn out quite right if you measure all of the reagents using one spoon. We recommend either using different spoons, or washing and drying your spoon before each new reagent.

Prepare an egg white and discard the yolk.

Obtain some nitric acid using a reaction between Ca(NO3)2 and NaHSO4. 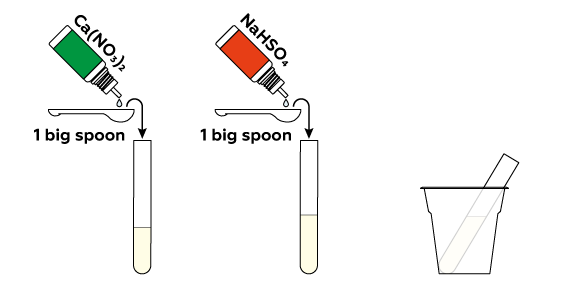 Nitric acid is often used to detect proteins; together, they tend to form a bright-yellow compound, especially if the temperature is high enough. 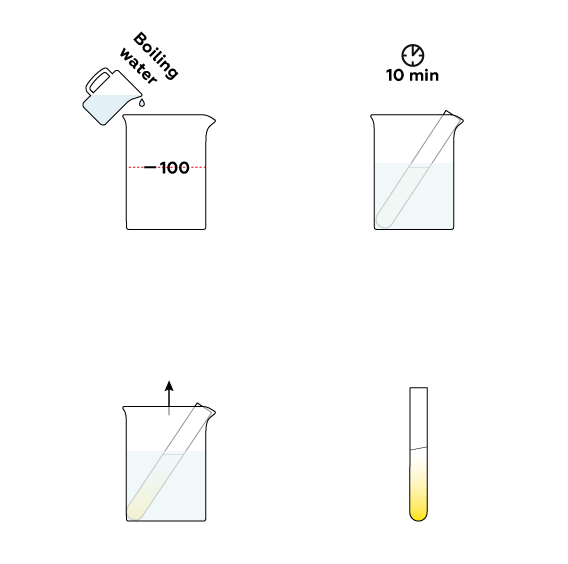 Proteins are extremely diverse—there are millions of different kinds of them. All proteins, however, are made of only 22 different building blocks known as amino acids. Four of these amino acids are "aromatic,” meaning that they contain special "rings" of atoms

. These react with the nitric acid you obtained in your experiment to produce yellow compounds.

When a reaction produces a clearly-visible result, such as the yellow color in the reaction between nitric acid and a protein, it can be used as a qualitative test. In other words, it can help determine if a sample contains the compound in question. The egg white in your vial turned yellow—and in addition to simply being cool, this lets you conclude that it did indeed contain proteins with aromatic amino acids.

What happens to the egg white?

Chemically, an egg white is made out of protein molecules. Proteins are very large molecules with a complex structure. Proteins are made of many individual amino acids. The individual amino acids are linked together to form chains. These chains are twisted together into a complex spiral or knot. However, as soon as a molecule of protein meets with a molecule of nitric acid HNO3 – this complex structure starts to unwind and forms a yellow-colored yolk-like mass. This is how an egg white “turns into a yolk”. This experiment is very practical. Chemists use this reaction to determine the presence of protein in different samples. It is called the xanthoproteic test.

How is nitric acid produced in this experiment?

Nitric acid forms when we mix sodium hydrogen sulfate with calcium nitrate, according to the following reaction: