Why does the solution need to have salt in it?

Ordinary table salt is a substance that belongs to a class of compounds called electrolytes. Upon dissolving, such compounds produce positively- and negatively-charged ions. This makes the solution capable of conducting electricity.

But why is this important? It's quite tricky to explain, but if you want answers, we’ll do our best!

Electrons can move freely in metals – in fact, their movement in a certain direction in an electrical circuit is what creates electric current. However, they cannot swim through a solution on their own. But why do they need to move through the solution at all?

The batteries drain electrons from one strip of iron and transfer them to the other. When a significant lack of electrons arises on the first, and a large excess on the other, the reaction slows down. And the most logical way to restore the balance of electrons is to organize their "transfer" from the area where they are in abundance to that where they are lacking.

This is where the Na+ and Cl- ions that make up salt come to the rescue! Each Cl- ion contains an extra electron, and each Na+ ion is missing an electron. Thus, Сl- ions behave analogously to cargo ships, carrying electrons to the area where they are lacking, while Na+ ions float in the opposite direction, like empty ships.

Interestingly, this process allows you to close the circuit; that is, you can force the charged particles in it to go round in circles. Thus, electrons move through the battery, wires, and strips, while negatively-charged ions, i.e. carriers of electrons, move through the solution from one strip to another.

Batteries are likened to “electron pumps” transferring electrons from their “+” to their “–”. How does this happen?

Inside, a battery is divided into two sections, separated by wadding: one section contains a substance that can give its electrons away, and the other contains a substance that is willing to take them. Pretty much like the magnesium and iron from the Rust protection experiment in this very kit! When the battery isn’t connected to anything, these isolated substances cannot react with each other, but when the electric circuit is closed, the electrons start migrating through it, inducing the beginning of a reaction. Such a reaction is called an oxidation-reduction or redox reaction as, in the process, one substance loses electrons (is oxidized) and the other gains electrons (is reduced).

You can study the principles of how batteries work in more detail and even create your own with the help of the Chemistry & electricity and Zinc-carbon battery kits.

First, prepare an electrolyte solution with ordinary table salt NaCl. It will accelerate the decomposition of iron Fe. Then, add sodium ascorbate, which will visualize the traces of decomposed iron in the solution. 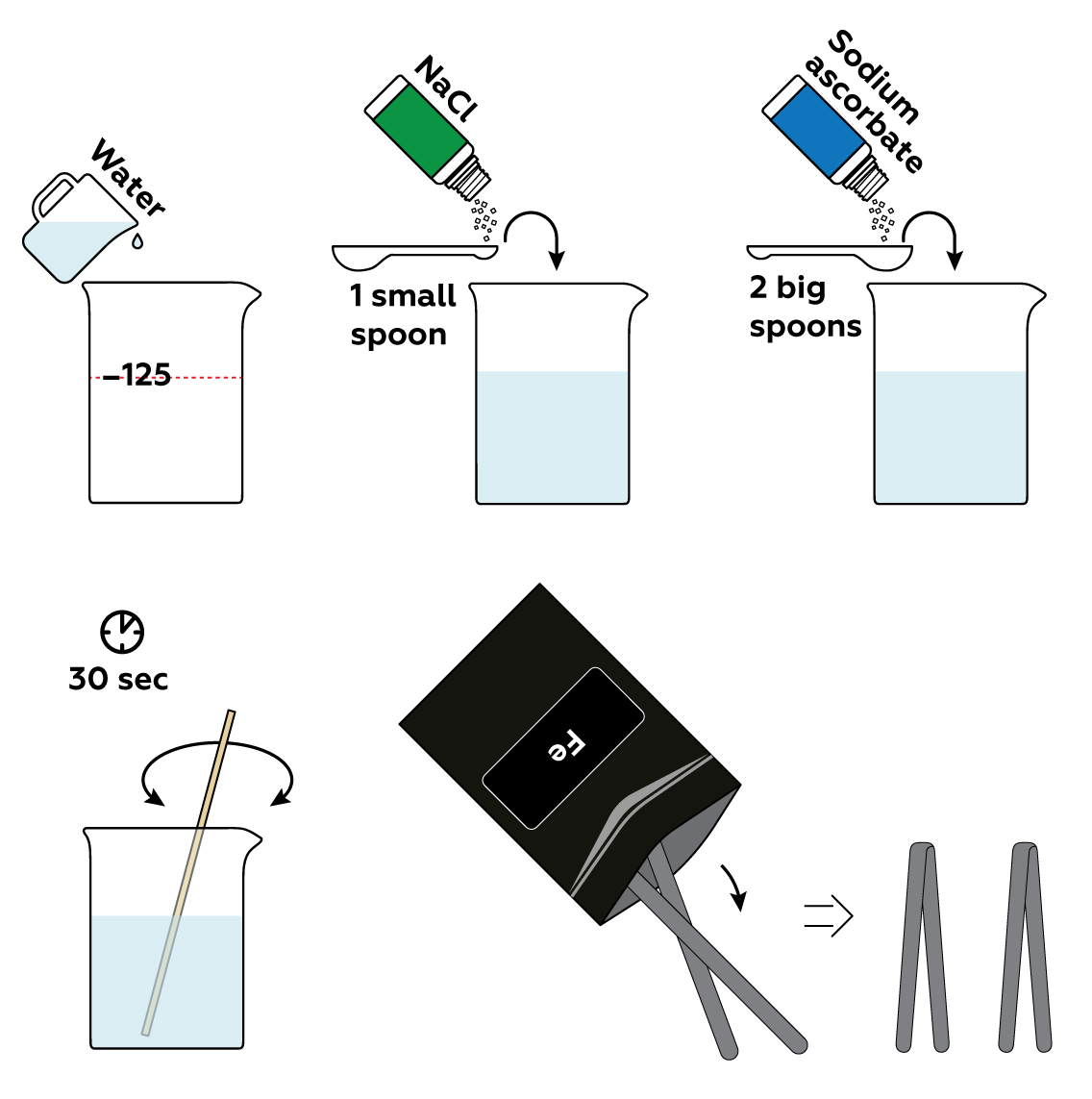 Immerse the iron strips in the solution and connect them to the batteries via crocodile clips.

Wow! Look at the purple "fog" materializing near one of the iron strips! These are ascorbate ions detecting traces of decomposed iron. But why is only one iron strip affected?

Corrosion is the destruction of metals that occurs when electrons are taken from them. You’ve probably seen examples of corrosion in everyday life—iron rusts gradually when exposed to water H2O

However, this is not the only way to destroy iron—batteries can cope with this task perfectly too! A battery

acts like an electron pump that transfers electrons from its "+"

. It takes electrons from the iron strip on the "+" electrode

and delivers them to the one on the "–" electrode

. As a result, the first iron strip gradually decomposes, turning from metallic Fe

ions themselves are faintly colored. Fortunately, the ascorbate ions from sodium ascorbate are able to detect them! As soon as the first Fe2+

What happens with the second iron strip?

While the violet iron ascorbate forms around one of the iron strips, another strip is covered with bubbles. Why is the process on the second strip different from the first?

As the battery transfers electrons from the iron strip on the “+”

electrode to the one on the "–"

electrode, an excess of electrons forms on the second plate. But iron doesn't need extra electrons, so it is more than happy to share them with someone. Who is the main contender for these electrons? It turns out that hydrogen particles

in the water molecules H2O

from the surrounding solution are eager to take some electrons, pair up into H2

molecules, and form the bubbles that you see!