Prepare the solution of anthocyanin, a natural dye. 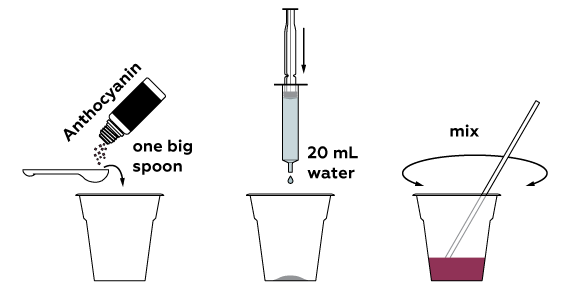 Prepare the dry reagent mixture, which will act as a source of carbon dioxide.

Add the liquid soap, which will later foam up the mixture.

The foam is simply a lot of carbon dioxide gas CO2 which makes the liquid soap form bubbles. And, of course, the food coloring anthocyanin, which can be found in grapeskin, and which makes the foam much more spectacular. You might also notice some particles of a white solid in the foam - these are small amounts of the initial powders (citric acid and sodium carbonate) which have neither reacted with one another nor dissolved in the water.

Initially, we mix two substances: citric acid H3C6H5O7 and sodium carbonate Na2CO3. As solids, they don’t interact with each other. They react when we add water (the anthocyanin solution)!

The carbonate anion CO32– reacts with two hydrogen ions H+ to form carbonic acid H2CO3, which is unstable and easily decomposes, yielding water H2O and gaseous carbon dioxide CO2↑. These processes happen rather rapidly, so a lot of gas forms in a very short time, causing the foam to erupt!

What is anthocyanin and what do we use it for?

Anthocyanins are natural dyes that are often used as food coloring. They are usually extracted from grapeskin, but can also be found in many other fruits, berries, and plants. Raspberries, blueberries, blackberries, and cranberries all owe their color to anthocyanins!

We add anthocyanins to our experiment just for fun. Everything would work just as well without them, but our bubbles would be totally colorless if we were to skip the first step (adding and dissolving some anthocyanins).

This is also the anthocyanins’ doing. The foam can actually have several different colors, predominantly pink, violet, and blue. Anthocyanins can react to the presence of some acids and bases in the media they are dissolved in. Indeed, citric acid is acid and causes anthocyanins to turn pink or even red when the two interact. And, as sodium carbonate is a base, anthocyanins turn blue when they encounter sodium carbonate particles. You can learn more about this phenomena here in the «Anthocyanins» experiment.