This experiment is included into Hydrogen and Chlorine kit along with Hydrogen. Subscribe and get everything you need to do this experiment at home.

The NaHSO4 aggregated into lumps. How can I measure it?

Use a stirring rod from the kit to break these lumps apart. Keep stirring the salt in the bottle until it becomes fine enough to measure.

I smell gas. Is everything okay?

This experiment produces a negligible amount of chlorine. The amount of gas released is enough to create a noticeable smell but too small to cause any harm to health.

As a side note, never sniff chemical products directly! The proper technique for smelling any chemical substance is called “wafting”: gently fan the air above a chemical container toward your face. This will suffice to allow you to detect any scent.

The iodine stain doesn’t want to disappear completely. What should I do?

Adjust the filter paper to position the stain away from the edge of the beaker, right above the chlorine vapors. Make sure all three candles are lit. Give it some more time.

I dripped the thymol blue on the same filter as the potassium iodide drop. Will I still get a result at the end of the experiment?

If the drops don't overlap, you may continue the experiment. However, if they blended together, take a new filter paper and deposit the drops again.

Perform the experiment in a well-ventilated area. Keep a pitcher of water nearby.

Sodium chloride NaCl and sodium hydrogen sulfate NaHSO4 can react to produce hydrochloric acid HСl, but not when dry. 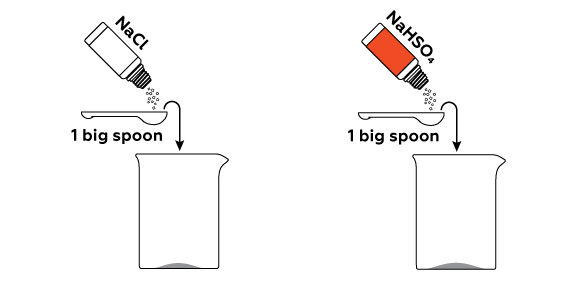 Hydrochloric acid HCl, in turn, can react with manganese dioxide MnO2 to produce chlorine Cl2. To produce HCl and make it react with MnO2, you need to dissolve the reagents in water. 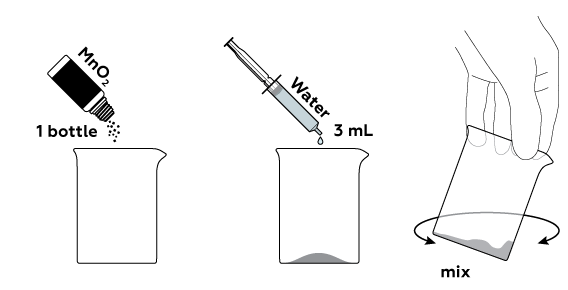 You’ll need some heat in order to start the reactions to produce chlorine. The candles can provide just enough heat. But before heating the beaker, apply some potassium iodide KI to help you detect the emerging chlorine.

The reaction begins when you light the candles. You can determine the presence of chlorine by observing the color changes in the KI spot on the filter paper. 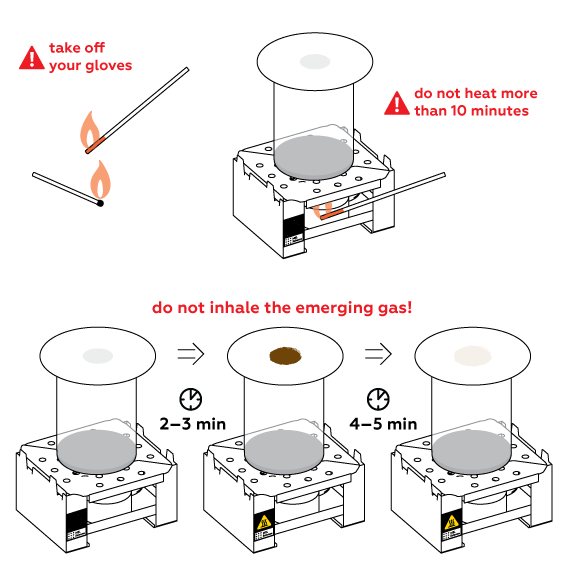 To stop the production of chlorine, simply stop heating the beaker and add cold water. But even after you do this, there will be enough chlorine gas in the beaker to observe one more reaction—with thymol blue as an acid-base indicator. 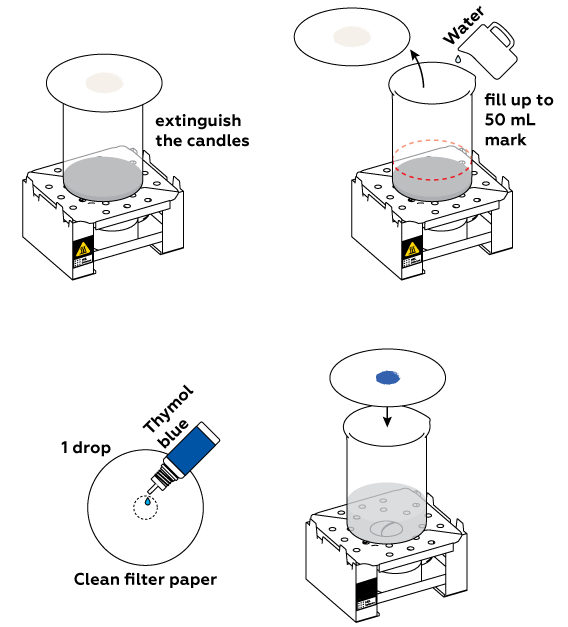 Thymol blue turns yellow-red in the presence of acids.

Chlorine changes the color of the indicator thymol blue and oxidizes iodide into molecular iodine.

If you arrange all the chemical elements by how much they like to take electrons from others, chlorine Cl will come up in the top three. In KI, iodine I had taken hold of potassium K's electron and was existing happily as an iodide ion I-… until the chlorine gas Cl2 arrived (with your help, of course). It took that extra electron from iodine, making it form I2 molecules, which have a characteristic iodine-brown color. And chlorine didn't stop there. It even took electrons from the newly-formed I2, forcing it to form a compound with hydrogen H and oxygen O — HIO3, which is colorless again.

Not only can Cl2 ruin many compounds by taking their electrons, Cl2 forms acids upon dissolving in water (remember the acid-base indicator color change?). These properties make chlorine quite dangerous, but also very useful: most microbes can't survive in water treated even with moderate and safe (for humans) amounts of chlorine.

How is chlorine produced?

Chlorine Cl2 was first produced as early as the XVIII century by a Swedish chemist, Carl Wilhelm Scheele. Even though the chemist did not realize that he had discovered a new element, the method he used is very similar to the method used in our experiment. The chemical reaction in Scheele’s method is shown in the following chemical equation:

When manganese dioxide is added to a solution of hydrochloric acid, half of the chlorine ions are oxidized to form molecular chlorine, while the other half bond with manganese.

How is the hydrochloric acid for this experiment produced?

At the same time, sodium chloride splits into two ions, Na+ and Cl-:

When the chloride and hydrogen ions meet, they bond to form hydrochloric (HCl) acid:

In summary, hydrochloric acid forms according to the following reaction:

Why does the drop of thymol blue solution change from blue to red?

This causes the number of protons to increase. When thymol blue is exposed to a high concentration of protons, its color changes from blue to red.

What happens to the solution of potassium iodide?

Halogens have an interesting chemical property: a more reactive halogen pushes a less reactive one out of its salts. This is exactly what happens in our experiment: chlorine is more reactive than iodine, so it pushes the iodide ions out of potassium iodide to form molecular iodine. This gives the spot on the filter paper its characteristic brown color:

Why do iodine and thymol blue lose their color over time?

Chlorine is a very reactive element. It can react with iodine to produce a colorless compound HIO3.