Grow red crystals out of a potassium ferricyanide solution!

Yes, this is possible. In this case, pour the solution into a Petri dish, leaving the insoluble precipitate behind.

The crystals are growing very slowly or not at all.

Wait just a little longer – you’ll get your beautiful crystals in the end!

My crystals turned out small and rather unimpressive.

This is possibly because they were contaminated with dust or exposed to a temperature change during their formation.

But don’t be upset! You can change that. Wait until the crystals are completely formed. Dissolve the same crystals in 10 mL of boiling water and pour them back into the Petri dish. Try to protect the solution from dust and changes in temperature.

How can I preserve my crystals?

If you want to keep your crystals nice, coat them with a colorless nail polish. After the nail polish dries, store the crystals in a closed container.

The substance didn’t dissolve completely, and when I poured the solution into a Petri dish, I poured the sediment along with it. What should I do? 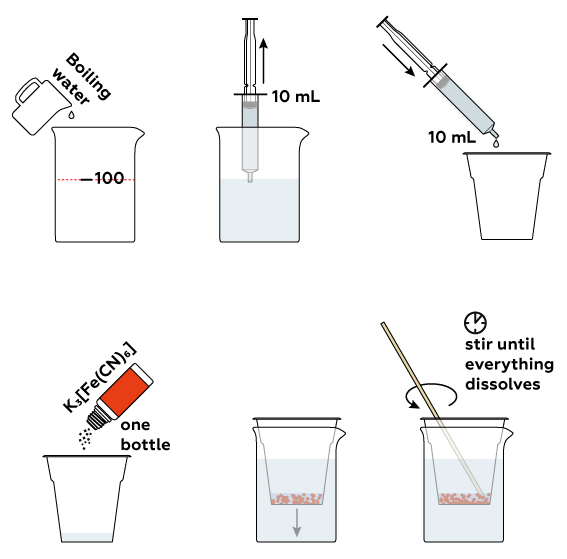 Leave your K3[Fe(CN)_6] solution to cool and evaporate. 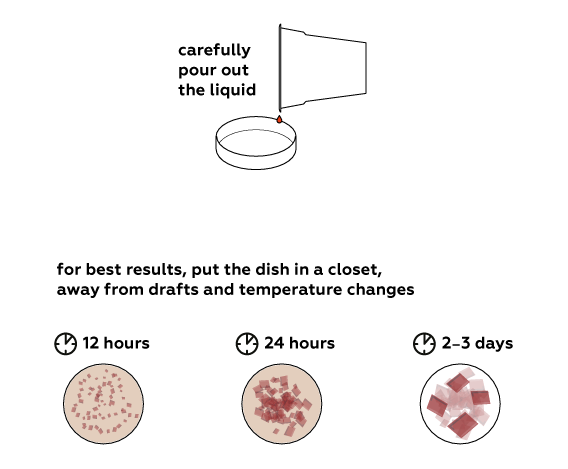 Dispose of solid waste along with household garbage.

Hot water can usually dissolve a greater quantity of a substance than cold water. As the solution gradually cools and the water evaporates from the Petri dish, the ions become crowded in the solution and therefore can’t move around as easily as before. They bump into one another and stick to each other. As more and more ions stick together, small crystals form. With time, they become bigger and, as a result, visible!

How are the crystals formed?

Crystals can be composed of various components such as molecules (like sugar), ions (like table salt NaCl) or atoms (like diamonds C). Crystals made of metal are particularly fascinating. Yes, metallic crystals! In a metallic crystal, the metal atoms are bound together via an electron cloud shared throughout the entire crystal. Some of these crystals consist of an endless chain of metal atoms (for example, crystals of cesium or bismuth). There also exist some complex crystals that contain both ions and molecules.

The world around us is moving all the time. Yet even in this reality of constant change, crystals demonstrate fundamental stability and permanency. How is this possible?

Crystal growth can be compared to the construction of a brick house. If the bricks are simply dumped into a pile, they’ll remain a pile of bricks. However, if each brick is carefully and patiently put into place, stable and solid walls can be built. The same applies to crystals. Under the right conditions, the principal components – the “bricks” – form a strong, precise, carefully-assembled structure. It’s important to remember that, unlike real bricks, the “bricks” that form crystals can bond to each other without any additional “mortar” or other binding material.

That’s exactly what happens in a crystal of potassium hexacyanoferrate (III) K3[Fe(CN)6].

In the first half of the 20th century, scientists discovered new technologies that allowed them to closely examine crystalline structures. This, in turn, helped them to determine the orientation of the atoms and molecules in a crystal and helped them to precisely measure the distance between them. For example, the study of potassium hexacyanoferrate (III) crystals (which we obtained in this experiment) demonstrates that each negatively-charged ion [Fe(CN)6]3– is surrounded by six positively-charged ions K+, while K+ ions are also surrounded by three or four negatively-charged ions. These ions are bound by the electrostatic attraction which keeps the crystal from crumbling into powder. Though a crystal can be crushed into fine dust, it would require a lot of work. 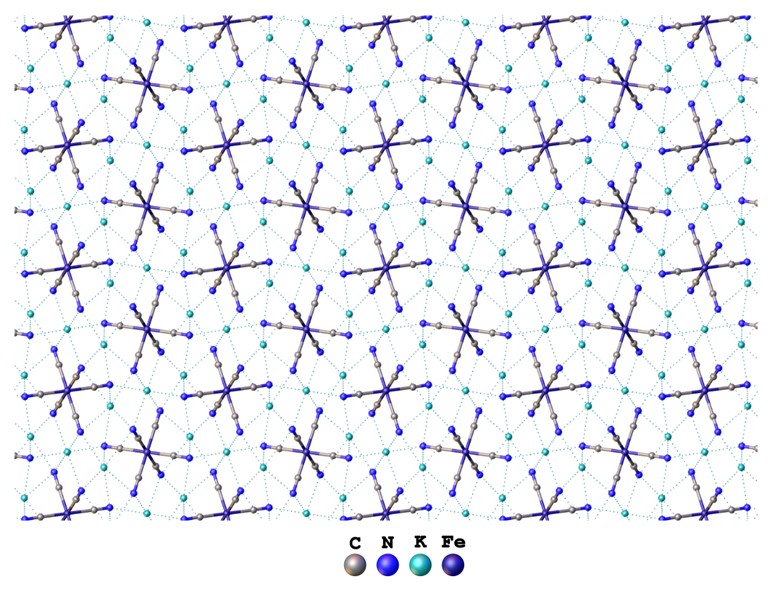 Why does potassium hexacyanoferrate (III) precipitate out of the solution and form a crystalline structure?

In this experiment, potassium hexacyanoferrate (III) is dissolved in a given amount of water at an elevated temperature of almost 100 oC (212 oF). As the solution slowly cools down and the water evaporates, the ions start to feel very “crowded." Some of the ions take off and leave the solution to form a crystalline precipitate.

Is it possible to dissolve the crystals and repeat the experiment?

Yes, it is possible to dissolve the crystals and repeat the experiment. The potassium hexacyanoferrate (III) crystals are soluble in water.