How can I make the rocket fly as far as possible?

When placing the tube in the beaker, position it at a 45o angle.

The rocket isn’t taking off. What should I do?

First, make sure the rocket is placed on the stopper at the bottom of the beaker. Second, check that the capsule of citric acid is open. If all else fails, repeat the experiment using another test tube.

The rocket took off before I could put it in the beaker.

These compounds react very quickly and intensely. That's why you should prepare the beaker in advance – so that you can rapidly put the test tube in it.

Some of the contents of the test tube got on me. Are they safe?

Sodium carbonate and citric acid are often used in cooking. In case of contact with skin, rinse the affected area thoroughly with water.

Assemble the tail unit for your rocket. 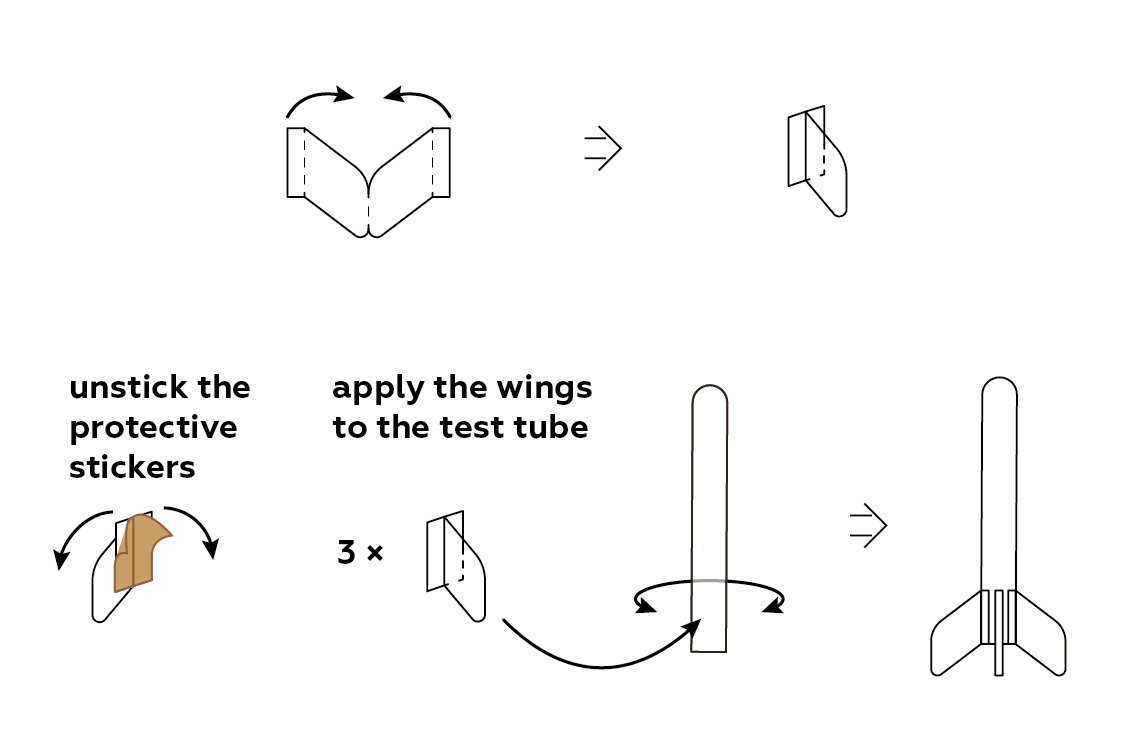 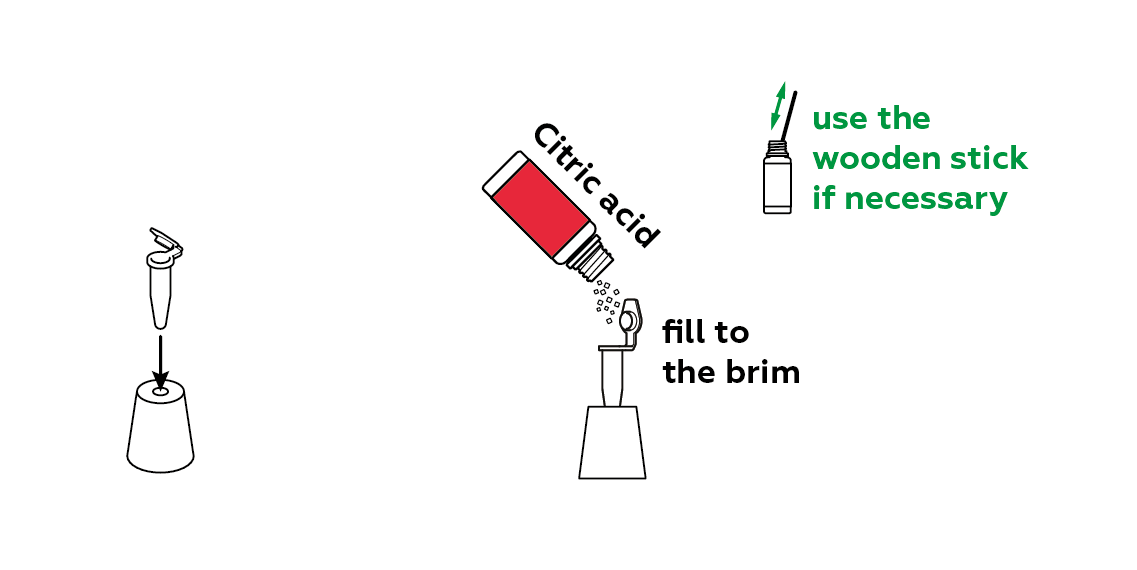 Put your citric acid capsule inside the rocket and seal the rear end. 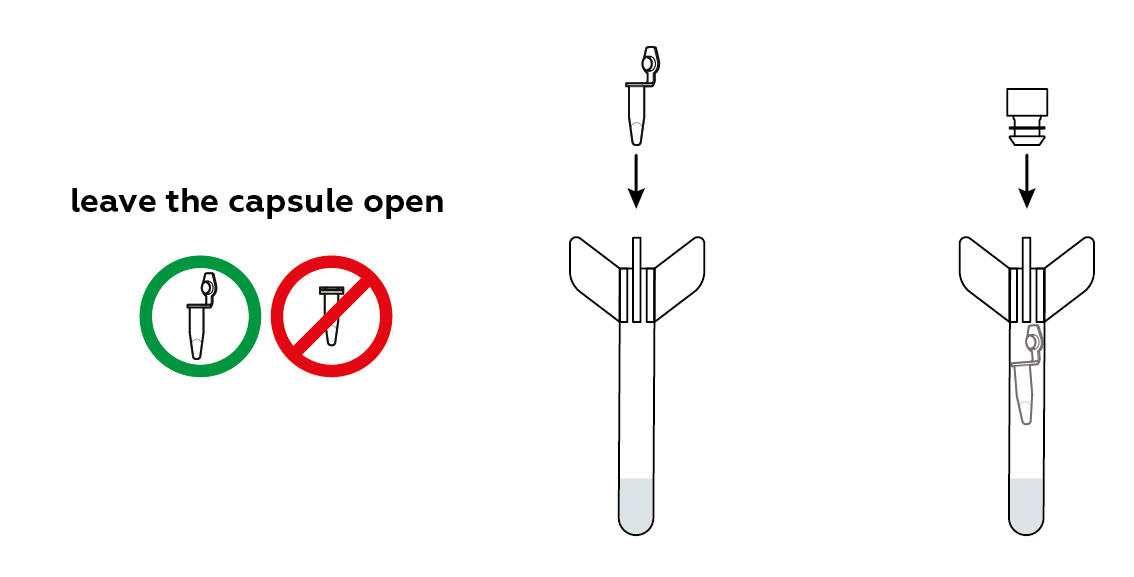 Let the citric acid react with the sodium carbonate by turning the rocket over. 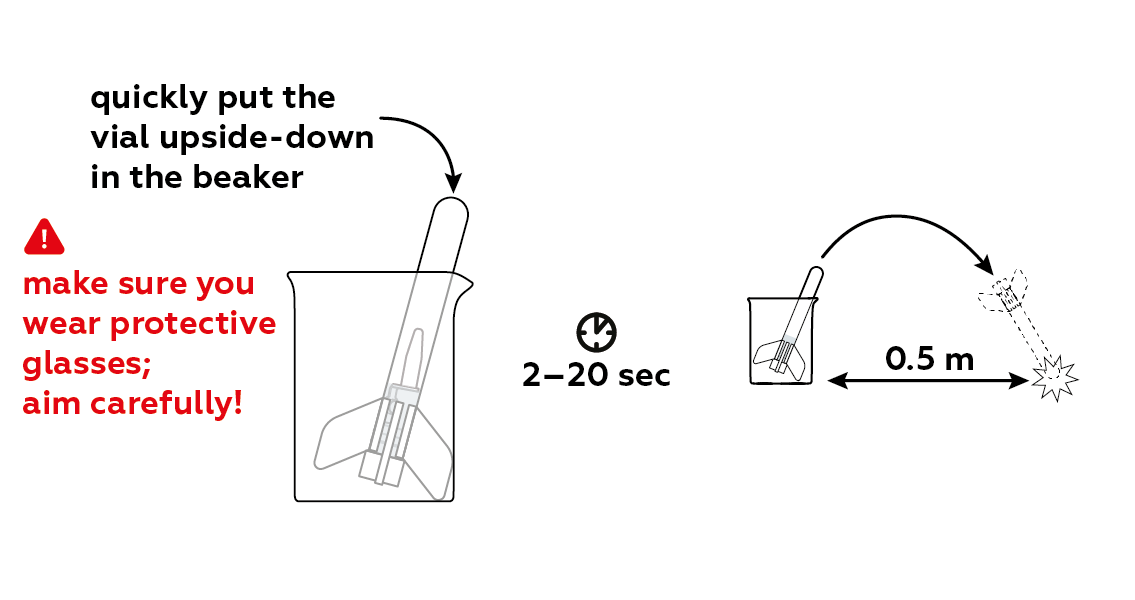 When we turn the test tube upside down, water begins to dissolve the sodium carbonate Na2CO3 and citric acid H3C6H5O7 powders. As these compounds dissolve, some charged particles called ions appear in the solution. One of these ions the CO32–

from the Na2CO3 reacts with H+

Why does the test tube launch into the air?

The test tube takes flight because of gas formed via a chemical reaction. As the tube is closed securely with a stopper, the gas accumulates there. Once a certain amount of gas accrues in the test tube, it erupts out, forcibly disconnecting the tube from the stopper. And we have liftoff!

Pressure: why is the tube forced out?

Initially, the tube contains only air. It consists of a large number of molecules, mostly nitrogen N2 and oxygen O2, which are constantly moving around. Air molecules move quite quickly, colliding amongst themselves and with surrounding objects. Luckily, they are very small, so we don’t feel these collisions on an individual basis, but we’re familiar with their cumulative result — pressure. Pressure, which is usually associated with the P symbol, is a characteristic that describes how many of these molecules collide with an object per time unit, and how quickly these molecules are moving during these collisions.

What is the gas we obtain and how does it form?

More about the reaction:

When we turn the test tube upside down, the sodium carbonate Na2CO3 solution and citric acid H3C6H5O7 powder are mixed and the reaction begins. The following ions form:

H+ from citric acid and CO32– from carbonate react to yield water and carbon dioxide gas:

Such a reaction is known as an ion exchange reaction (as the substances quite literally exchange ions with one another).

Carbon dioxide gradually accumulates and noticeably increases the pressure inside the tube. As there is not enough space for the air and carbon dioxide molecules combined, they begin to push on the stopper and on the walls of the vial. At some point, the stopper can no longer contain the pressure, so it disconnects and comes to rest at the bottom of the beaker. There is nothing stopping the vial, though, which jets off like a rocket.

How does the tube fly? Do rockets fly the same way?

Actually, the tube flies rather like a cannonball shot from a certain angle into the air. Real rockets fly due to other physical processes that result when a huge volume of heated gas is released from the rocket nozzle. However, the driving force in a rocket also relies on another sort of chemical reaction known as an oxidation-reduction reaction.