The experiment didn’t work out. What should I do?

Something most likely went wrong with the electrical circuit. First, double check that the batteries are inserted correctly into the battery case accordingly to their polarity. Next, make sure that the wires with crocodile clips are connected exactly as shown in the instructions and that the metal part of the black crocodile clip isn’t touching the spoon handle. If this doesn’t help, check that the batteries are charged by either plugging them into another appliance or by testing them with a special instrument called a multimeter.

Also, note that your pattern should be scratched all the way through the paraffin layer, exposing the metal surface of the spoon. Even an extremely thin leftover layer of paraffin will prevent the solution from reacting with the metal and will hinder the experiment.

The reaction will occur at any point of contact between the metal and the solution. Make sure that, apart from your drawing, the whole spoon is protected with paraffin wax.

Why do we heat the spoon?

Our goal is to cover the spoon with a thin, even protective layer of paraffin wax. Paraffin will solidify too quickly on a cold spoon, leaving our layer of wax thick and knobbly.

Moreover, the thicker the layer of paraffin, the harder it will be to scratch a neat pattern in it. In some spots, the paraffin layer may even chip off.

The paraffin has solidified on the spoon, but there are some bare spots left. What should I do?

Deposit a thin layer of paraffin onto these spots. Blow on the spoon right away to help the paraffin wax solidify. Then, examine the quality of your fresh paraffin layer to see if it’s even enough.

Can I eat with my newly-designed spoon?

Unfortunately, no. Everything that has been in contact with reagents can no longer be used to cook or serve food.

Can I repeat the experiment?

There are at least two ways you can repeat the experiment using your etched spoon.

You can draw on the handle of the spoon. Cover the handle in paraffin and then follow the instructions. Just make sure that the treated part of the spoon is completely immersed in the electrolyte solution.

Alternatively, you can find a free spot on the already-etched part of the spoon or even add new details to your existing drawing. Experiment and create!

What else, besides a spoon from the kit, can be used in this experiment?

Any object marked “stainless steel” will work. However, it’s most convenient to draw on relatively small objects. Make sure to ask your parents’ permission to sacrifice these items for science!

Please keep in mind that any objects you choose to use for this experiment can no longer be used to cook or serve food. If you created an etched drawing on a spoon or a fork, you can further use it only as a souvenir. 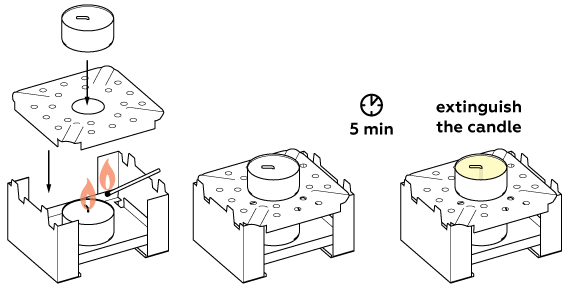 Next, heat the spoon.

Now, coat the spoon with a protective layer of melted paraffin.

Cool the spoon to solidify the paraffin.

Draw a pattern in the paraffin layer by scratching it all the way through to the spoon’s surface. For better results, make your design large and uncomplicated.

Connect the positively charged electrode (the red one) to the spoon handle.

Immerse the negatively charged electrode and the spoon in the salt solution to start the process of electrolysis.

To see the result of the reaction, clean the paraffin off of the spoon by heating it in hot water.

Remove the softened paraffin. You will notice that an electrochemical reaction partially dissolved the metal where it wasn’t protected with paraffin—that is, where you drew your pattern.

Why do we have to protect the spoon with paraffin?

Paraffin doesn’t react with water and doesn’t conduct electric current; consequently, it can shelter the spoon’s surface from the reaction medium. To ensure that the paraffin covers the spoon evenly, we slow down its solidification process by preheating the spoon.

What are electrolytes, and what do we use them for?

Electrolytes are compounds that conduct electric current due to their dissociation into ions. Generally, they are solutions of salts or substances in a molten state. Water by itself doesn’t conduct electricity—water is not an electrolyte. However, it often contains traces of various salts that lend it some conductivity. To prepare a suitable medium for our experiment, we add a relatively large amount of NaCl salt to our water to increase its conductivity even further. In water, this salt dissociates (splits) into ions: Na+ and Cl-. These ions actively move throughout the solution, enhancing its electrical conductivity and ensuring the successful flow of the reaction.

How does the drawing develop on the spoon?

The places on the spoon where you scratched your drawing are exposed to electrolysis. Electrolysis is a decomposition reaction from the electrical current in the salt solution, which the unprotected steel undergoes.

Such a reaction requires several components: a source of electrical current, positively and negatively charged electrodes, and an electrolyte solution.

Our electrolyte (NaCl salt) solution will serve as a conductor in our experiment. To recap: once dissolved in water, sodium chloride dissociates (splits) into ions: Na+ и Cl-. The coordinated movement of these particles in the system creates an electric current.

In the experiment, our spoon is connected to a positively charged electrode and immersed in the salt solution. Since the spoon attracts anions (negatively-charged ions), it is called an anode.

Our negatively-charged electrode—the crocodile clip at the end of the black wire—is immersed in the solution. It attracts positively-charged ions (cations), and thus, is called a cathode.

Our spoon is made of stainless steel. This alloy consists mostly of iron and carbon, but also contains a certain amount of chromium. Steel that is composed of at least ⅛ chromium is non-corrosive and doesn’t rust.

On an anode, i.e. on the spoon surface, the iron atoms gradually turn into iron ions, which leave the spoon and enter the solution. In other words, iron dissolves in the spots where your pattern has been scratched into the paraffin, gradually ‘carving’ your drawing into the spoon itself.

First, the reaction is as follows:

In this form, iron ions abandon the spoon, entering the solution.

Such drawings usually turn out rugged and somewhat uneven. The longer we let the electrical current flow, the deeper the lines we obtain. However, if we let the reaction proceed for too long, the steel under the paraffin layer will start to dissolve even beyond the confines of the drawing.

Can I use a spoon made of another metal?

Almost any metal can be etched using electricity. For example, you can try using spoons made of silver, brass or aluminum. However, keep in mind that each reaction requires certain conditions to work properly.

For instance, a silver spoon can’t be etched using a NaCl solution; the solution would form a dense layer of insoluble salts on the spoon’s surface. A suitable electrolyte solution, in this case, would be a solution of sodium nitrate NaNO3.

We can etch a pattern on an aluminum spoon using the same procedure as for a stainless steel spoon, but the process will take longer. We would recommend using a much more powerful source of electricity than four 1.5 volt batteries.

Brass is an alloy of zinc and copper. A brass spoon can also be etched via electrolysis, without special conditions.

The higher the current amperage, the more intense the flow of an electrolysis reaction.

Did you know? Etching is a popular art technique used to make drawings on metal objects, including silverware. You may have seen such patterns on vintage spoons and forks. Of course, you can try conducting this experiment with various spoons, but keep in mind that afterwards they shouldn’t be used for food preparation or consumption.