The coin didn’t become silvery. What should I do?

Wait a little longer. Double-check to make sure that the coin is resting on the zinc wire. This experiment requires direct contact between the zinc in the rod and the copper in the coin!

I poured one bottle of ZnSO4 into the candle holder, and it turned cloudy.

This can happen, but it won’t interfere with the experiment! Your coin will still turn silver.

What should I do if the zinc coating on the coin isn’t great?

Whatever you do, don’t touch the coin and the rod without gloves. There may be some pollutants on the surface of the coin. Try carefully cleaning the coin again, or just use another coin.

I left the silver coin on top of the stove for more than 10 minutes, but nothing happened.

If the coin has not changed colors at all, gently move the coin closer to the area above the flames and wait 5–15 more minutes.

The coin should turn golden after it is cooled and washed.

When removing the coin from the stove, I melted the tweezers...

Put a copper Cu coin on a piece of zinc Zn wire. 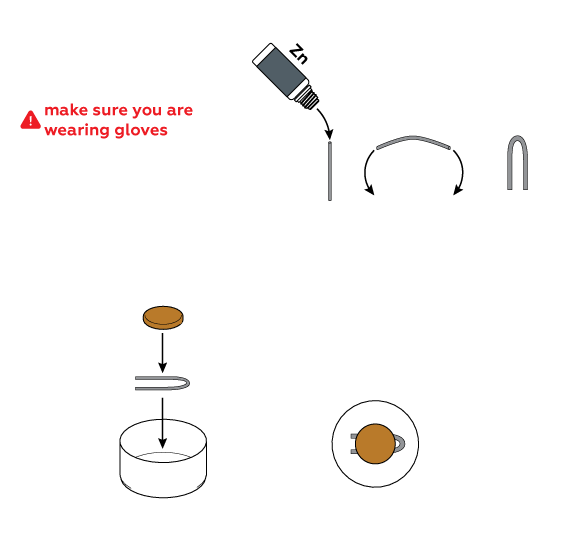 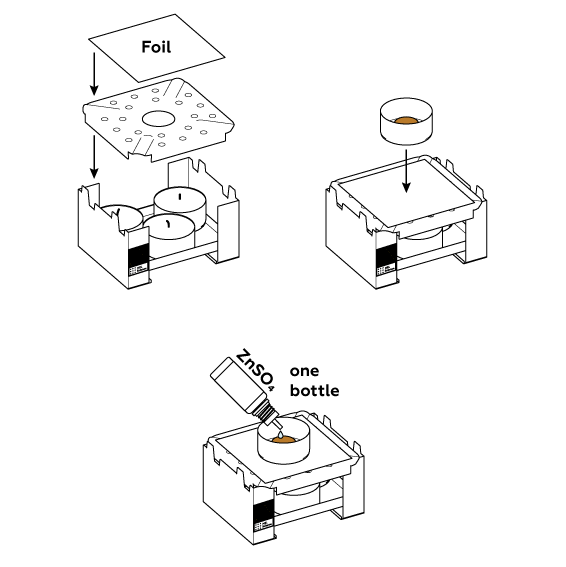 When the solution is heated, charged zinc particles—Zn2+ ions begin rapidly jumping off the wire and settling back down. Since the zinc and copper are connected, the zinc ions from ZnSO4 occasionally settle on the copper instead of the zinc. As a result, the copper coin is slowly covered with a layer of silvery metallic zinc. 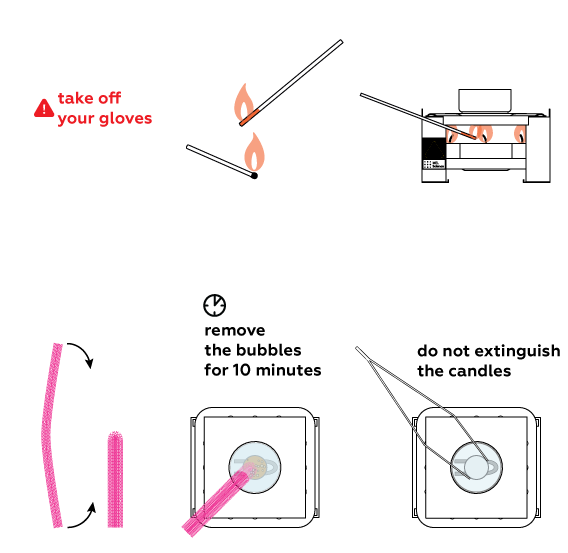 If you heat the coin, the zinc and copper atoms start jiggling around and get all mixed up, producing a yellowish alloy called brass. 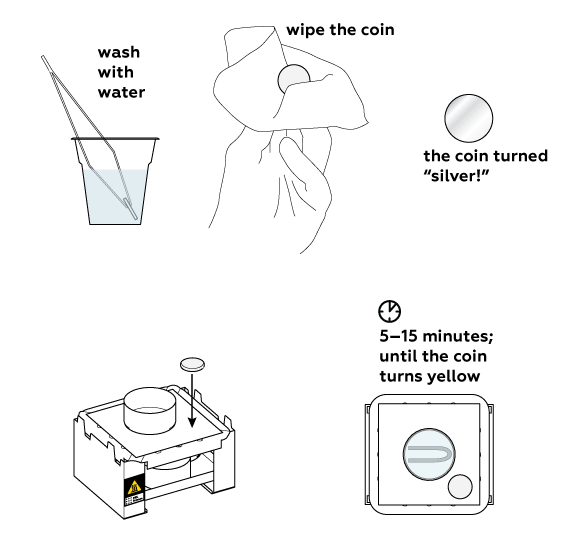 When you clean the coin, it almost looks like it's made of gold! 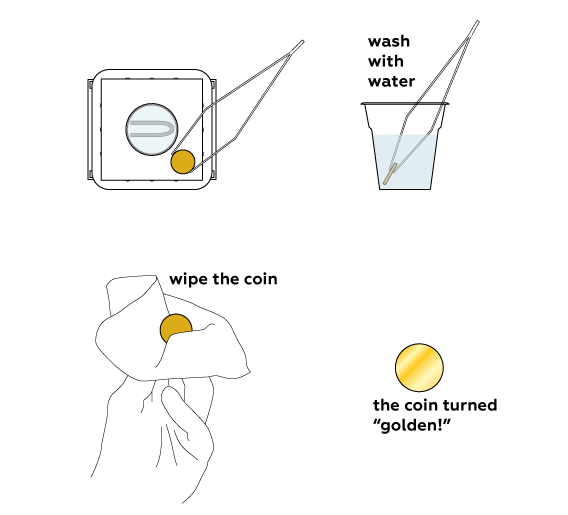 Wash the brush to repeat the experiment.

Why does the coin turn silvery?

In this experiment, we create the specific conditions that allow zinc to transition from its bound form – zinc sulfate ZnSO4 in the solution – onto the surface of the copper coin. The copper coin is completely covered by newly-formed metallic zinc Zn, causing the coin’s surface to turn silvery.

A piece of metal can be thought of as a green field filled with fresh, dense grass and populated with ambling sheep. The sheep represent electrons, and the field represents positively-charged metal ions arranged in a certain order inside this piece of metal. However, all metals are different. For instance, compare copper’s and zinc’s crystal lattices (i.e. the order that their ions are arranged in). From the “sheep’s” (or electrons’) perspective, copper is a more pleasant “field” than zinc because the grass there is greener, tastier, and denser. Analogically, electrons are more attracted to copper ions than zinc ions. This explains an amazing phenomenon that happens when the two metals come in contact with each other: some electrons from zinc transfer into copper. No wonder: the grass is juicier there! 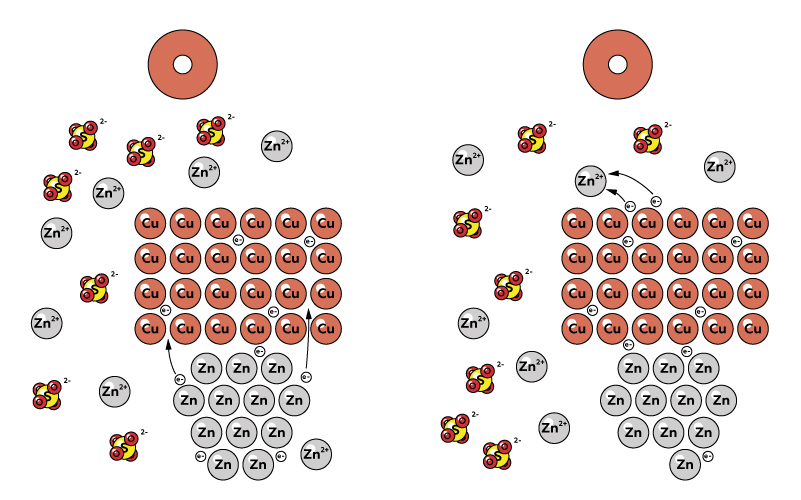 This forms additional “free lush meadows” on the coin, making the electrons from the zinc wire even more attracted to the coin. And at a certain point, there are no longer enough electrons for all zinc atoms in the wire, so the atoms on the surface finally turn into ions Zn2+. They may then leave to enter the solution.

Therefore, as a result of heating, the zinc atoms move from the wire onto the coin “traveling light”: they pass through the solution in the form of ions Zn2+, and their “electronic luggage” delivers itself separately, through the metals’ surfaces.

Gradually, the zinc atoms cover the coin completely, and the coin’s color becomes exactly the same as that of the zinc wire – all we can see on the coin’s surface is zinc! 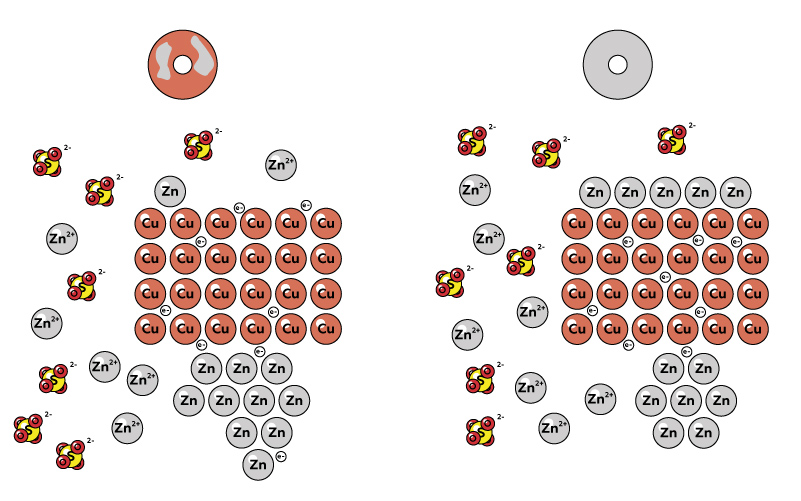 The same result is obtained if zinc powder is dissolved in a solution of sodium hydroxide. Due to zinc’s amphoteric nature, it can react with both acids and bases. The reaction is:

As you can see from the following video, zinc plating from such a solution also works well.

Why does the coin turn from silvery to golden when heated?

Any atoms in a metal crystal lattice vibrate slightly from side to side. Under normal conditions, these vibrations do not break any bonds. The oscillation speed of metal atoms varies depending on temperature.

When heated, the atoms in any object begin to move faster. In our experiment, this manifests by the zinc atoms on the copper’s surface beginning to “sink” into the copper. These zinc atoms actually dissolve in the copper, resulting in a surface made of a mixture of copper and zinc atoms. When the coin’s surface is composed of this combination, its color becomes a blend of silvery (zinc) and reddish brown (copper), which makes it look golden.

Let's take a roundabout approach to the subject. What is temperature? This property seems obvious enough in terms of our everyday experience: we can easily determine whether an object is cold or hot to the touch. Actually, temperature is an important parameter that reflects the speed of atoms and molecules. Particles begin to move faster when a substance is heated, and slow down when a compound is cooled.

The same thing happens with the coin in the experiment. When heated, the zinc atoms on its surface and copper atoms inside it begin to move actively. As a result, the zinc “sinks” into copper and thus permeates into the coin. Eventually, the coin’s surface comes to consist of a combination of zinc and copper atoms. When the atoms of the different metals alternate within one crystal lattice, an alloy is formed, in which one metal is dissolved in another. One such example is an alloy of copper and zinc, which is called brass.

Now, recall the structure of any metal. In our alloy, ions of zinc and copper are surrounded by a common “flock” of electrons. Thus, the color of the resulting alloy is a blend of silvery and reddish-brown, i.e. golden.

Can the coin be returned to its initial color? Or be made silvery again?

As we learned from previous discussions, the coin’s golden color is the result of a zinc-copper alloy that forms on its surface. In order to restore the original color of the coin, we need to remove the zinc atoms, leaving only copper atoms (i.e. we should clean the surface of the coin).

With a lot of effort, we could use sandpaper to remove every trace of zinc, but this would also leave many scratches. Science offers a much easier and more elegant method. Unlike copper, zinc can be easily dissolved in acids. Hence, to return the copper coin its original color, we can immerse it in hydrochloric acid HCl or vinegar, which is also acidic. This will dissolve all the zinc, leaving only copper with its redness.

However, some people prefer the intermediary silvery color over the original reddish-brown or final golden color. Unfortunately, there is no simple way to turn the coin’s color back from golden to silvery. From a chemical point of view, we would need to ensure the coin surface consists solely of silvery metal (in this case, zinc). The golden coin already has zinc on its surface; however, it would be very difficult to remove the integrated copper without affecting the zinc. Nor can we make the zinc atoms reverse and “float” back to the surface – there are no known forces that could pull them back out. However, the easiest way to turn the coin silvery is to immerse it in the zinc sulfate solution once more, along with the zinc wire. Thus, we can use both the original and the golden coin to successfully deposit zinc atoms on the surface.