This experiment is included into Calcium kit along with Calcium silicate and Glowing marble. Subscribe and get everything you need to do this experiment at home.

The calcium nitrate Ca(NO3)2 is very lumpy and gets stuck in the bottle. What’s the best way to get it out?

It turns out that calcium nitrate is a very hygroscopic substance – it loves interacting with the water in the surrounding air, and as a result, its crystals tend to stick to each other and to the walls of the bottle.

Use a wooden stick to knock the calcium nitrate loose from the bottle walls and break apart any lumps.

How can I make sure the stove is safe to touch?

Carefully study the information provided in the experiment set. Inside the box is a sticker detailing how to use the thermostickers provided in each box when dealing with heated objects.

I’ve followed the instructions, but the mixture is burning very slowly or not at all.

There are two possible solutions to this problem. First, you can try waiting a bit. The mixture might burn slowly at first, but gain speed and intensity after 10-20 seconds. And if the mixture stops burning without creating a bright orange flame, try mixing the components more thoroughly (check step 2 in the experiment card) and then repeating steps 3-4.

Calcium nitrate tetrahydrate crystals contain water, which will disrupt the experiment. Heat the crystals to force the water to evaporate. 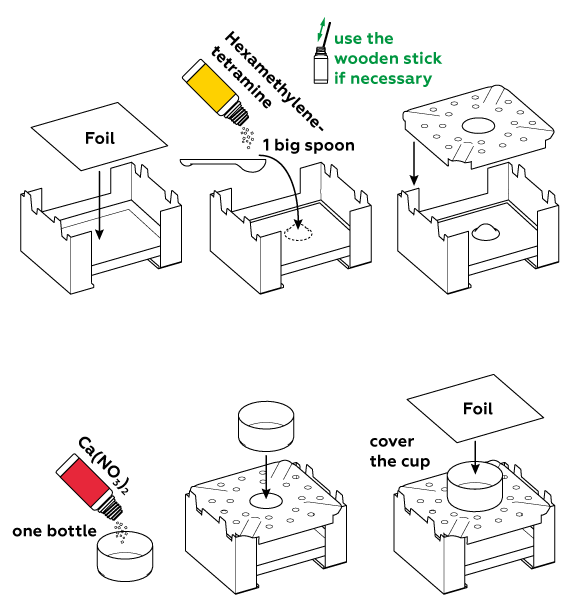 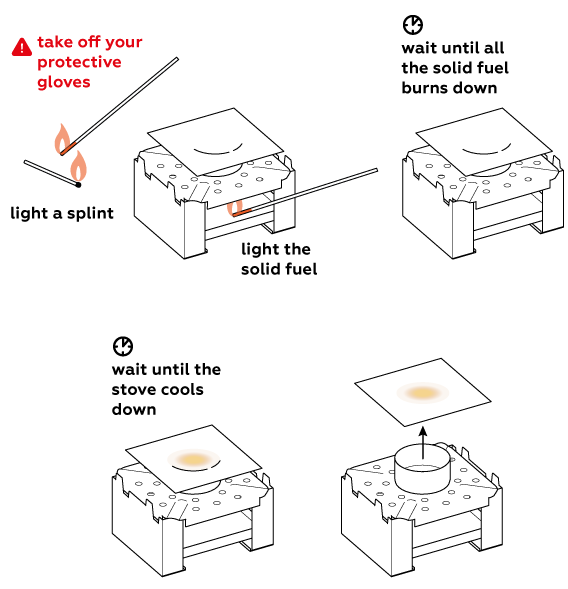 When the calcium nitrate dries out completely, add some solid fuel.

To prepare for the reaction, put some of the mixture into the stove.

To initiate the reaction, set the mixture on fire. 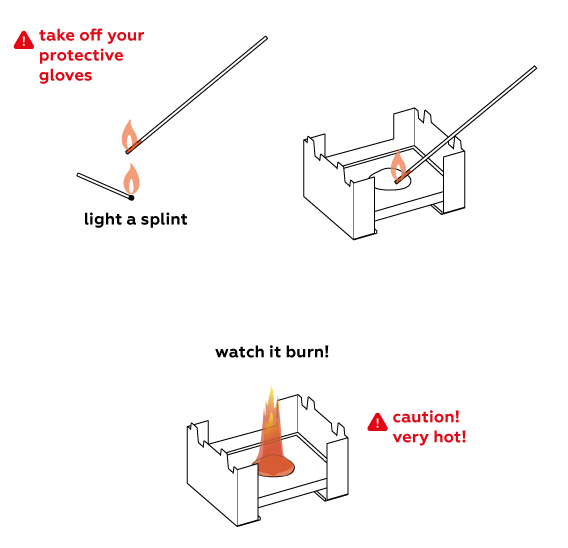 Many nitrates, such as calcium nitrate Ca(NO3)2

, are good combustion companions to fuels such as hexamethylene-tetramine. When heated

, oxygen reacts with the fuel to produce even more heat

, and so on. When orderly calcium nitrate crystals decompose, some calcium ions (calcium atoms with some electrons missing) can take off and fly with the flame.

Not only are these ions expelled into the air, they also receive a lot of heat energy

. This energy is absorbed by the ion's electrons. Eventually, they release this energy in the form of light

. The color of this light depends on the type of ion releasing it. For calcium ions it happens to be brick-red, and that's why the flame you see has this glamorous red tint.

Heated ions’ tendency to release light of a particular color might come in handy if you ever need to figure out if a certain element is present in a sample. Copper ions will tint a flame green, sodium ions—yellow, and so on. Perhaps you can guess how fireworks come to have all sorts of colors in their flames?

What happens to the calcium nitrate?

Calcium nitrate, also known as Norwegian saltpeter, has a formula of Ca(NO3)2. However, this substance, like many others, can exist in the form of crystals that contain a number of water molecules. Such substances are usually called crystallohydrates.

These crystals contain four water molecules for every one calcium nitrate species, so the composition of the substance is actually Ca(NO3)2·4H2O. We need to get rid of this water, so we heat the substance to force the water to evaporate.

Incidentally, it is the water molecules that cause the calcium nitrate crystals to clump.

Why do we need to remove the water from the crystals?

You will learn more about the key process below, but in brief: the water molecules would absorb a lot of energy needed for the main reaction (the combustion of the mixture of calcium nitrate and solid fuel), slowing and subduing the result.

Why do I need to mix the solid fuel and dried calcium nitrate?

We mix these two solids to make them act more effectively. If both calcium nitrate and solid fuel are spread evenly throughout the mixture, the burning will occur equally well everywhere.

What is solid fuel and how does it burn?

Solid fuel is a substance known as urotropine or hexamethylenetetramine. It consists of 6 carbon C, 12 hydrogen H, and 4 nitrogen N atoms - C6H12N4.

It burns readily while producing almost no smoke or smell, is not afraid of moisture (unlike burning wood), and yields a lot of heat when combusting. These attributes make it popular for use in tourism, camping, and some military contexts, especially in cases in which it is necessary to heat food or warm up quickly in tricky weather conditions.

What happens to the dried calcium nitrate?

Actually, it is the solid fuel that burns, releasing a lot of heat. Usually, when we say that a substance burns, we mean that it reacts intensively with oxygen from the ambient air.

The calcium nitrate Ca(NO3)2 does not burn, but rather decomposes when heated to yield two substances – oxygen and calcium nitrite:

The oxygen released throughout the mixture facilitates the burning of the solid fuel, which allows the fuel to produce even more heat.

Some calcium ions (calcium atoms with two electrons missing) can vaporize into the flame, tinting it bright orange.

How do calcium ions color the flame?

The chemical reaction we observe produces a large amount of energy. The aforementioned calcium ions Ca2+ are not only transported into the air but also receive a lot of heat energy.

This amount is sufficient to excite some of the calcium ions’ electrons. For a time, these electrons contain more energy than normal. They soon release this energy in the form of light.

Calcium ions produce a bright orange to brick-red light. The color of the light depends on the nature of the ion releasing it. For example, the flames containing copper ions Cu2+ will be tinted green.