Thymol blue is reduced with hydrogen

Why does the foil float up to the surface?

A reaction of aluminum with sodium hydroxide yields hydrogen, which in turn is released in form of gas bubbles and pushed the light foil up. By the way, thanks to this property, hydrogen has long been used in aerostatics! Learn more about this phenomenon in “It is interesting” section.

The solution doesn’t turn colorless. What should I do?

Perhaps, you used a very dense foil for this experiment, and the reaction will require more time. Wait for 5–10 minutes more.

There is something dark left on the bottom of the test tube. What is it?

Since the quantity of sodium hydroxide wasn’t measured exactly, the foil might have not reacted completely. In order to fully dissolve it, add some more alkali.

Dispose of the reagents together with household waste. Pour solutions down the sink and wash off with excess of water.

What happened to the foil?

Unfortunately, the solution in our test tube is weakly alkaline, and sodium tetrahydroxyaluminate is unstable in such an environment. Eventually, most of sodium tetrahydroxyaluminate will decompose into sodium hydroxide (NaOH) and aluminum hydroxide (Al(OH)3). The latter is almost insoluble in water. Due to gravity, its particles slowly precipitate, thus, forming a cloudy layer at the bottom of the test tube.

Why did the solution turn colorless?

As mentioned above, a reaction occurred between aluminum (Al) and sodium hydroxide (NaOH) solution:

This reaction yields hydrogen. When just released in the reaction, a hydrogen atom is at its highest potential to donate one electron (and thus to become a reducer). And this is exactly what happens inside the test tube. As soon as formed, hydrogen reduces a thymol blue molecule turning it into a colorless substance. That is why we see the solution lose its color. 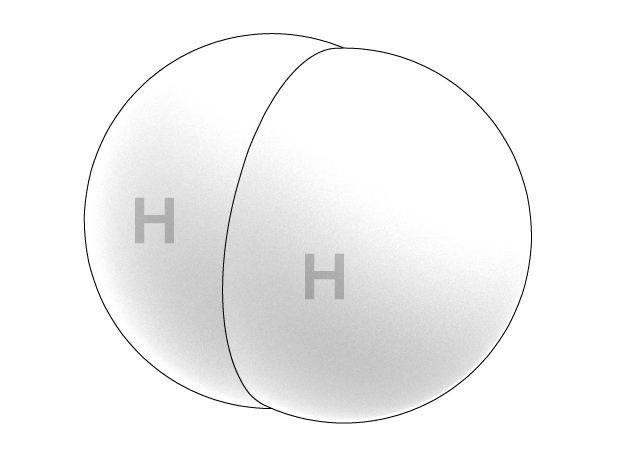 As we already know, a molecule of hydrogen consists of two identical atoms. However, not all of us are aware that at the moment of its generation, for the very first moments of its existence, a hydrogen atom is dwelling “in lonely pride.” And this atomic hydrogen can effectively reduce organic compounds! Obviously, it is disadvantageous for hydrogen to exist in form of isolated atoms because without a neighboring atom, it takes too much energy for a hydrogen atom to retain its only electron by the nucleus, all by itself.

As soon as two of such atoms form a joint hydrogen molecule, their reactivity drops dramatically. And the reason is that now two nuclei participate in retaining each of two electrons so that now they are connected much stronger. Therefore, molecular hydrogen cannot reduce thymol blue under the same conditions that work fine for atomic hydrogen.