This experiment is included into Iron kit along with igniting iron. Subscribe and get everything you need to do this experiment at home.

I applied a magnet to the cup, but nothing happened. What should I do?

It could be that you are using a very weak magnet. For instance, some souvenir magnets that work fine on a fridge may not be suitable for this experiment. Try to find a stronger magnet. We recommend neodymium magnets – they usually work well!

When I was draining the solution into the Petri dish, I accidentally poured some of the iron out with it. Should I start over?

I added a pipette of water to the Petri dish, but the liquid still isn’t covering the bottom. What should I do?

Carefully take the Petri dish and swirl it in gentle circles on the table. This will help the liquid spread out to cover the entirety of the surface. If necessary, add some more water and swirl the Petri dish again.

Can I use the hydrogen peroxide H2O2 we have at home?

Yes, of course, you can use the hydrogen peroxide from your medicine cabinet or purchase it at any local pharmacy. Any concentration from 3% to 10% should work fine.

The unreacted iron can be collected with a magnet.

While the magnet is holding the residual metallic iron, you can pour out the colorless ferrous citrate solution. 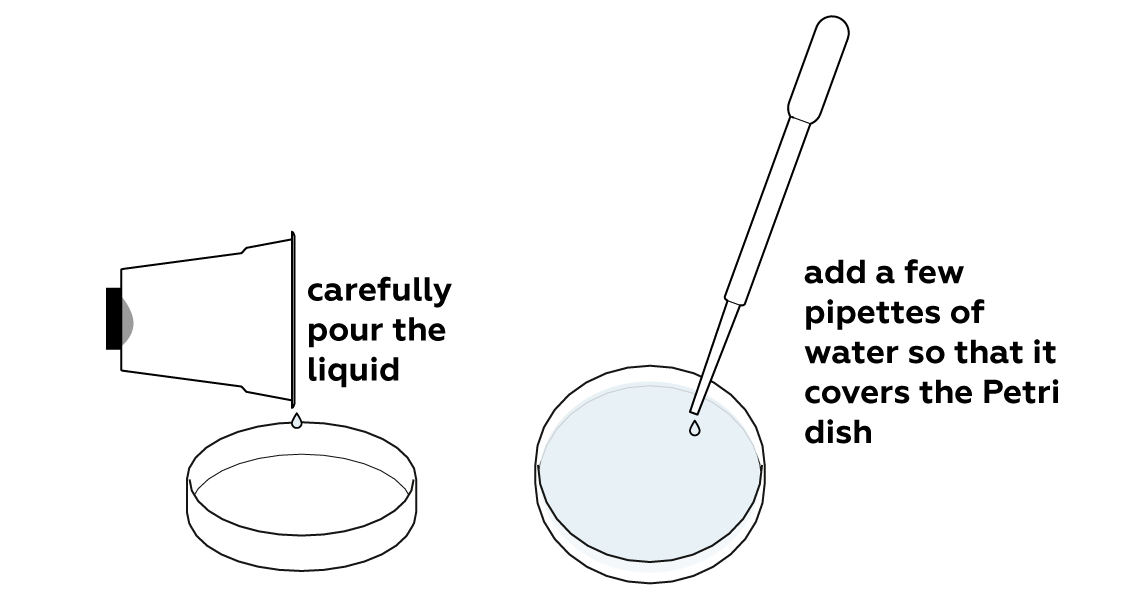 To repeat the experiment, wash the Petri dish.

What happens when we add citric acid to iron powder?

When citric acid is added to iron powder, a whole chain of reactions initiates. First, citric acid reacts with metallic iron Fe. Being a typical metal, iron readily donates electrons and becomes “oxidized”. Simultaneously, the protons H+ in citric acid become reduced producing hydrogen H2 in form of gas bubbles. We observed the gas bubbles in the experiment. This process is represented by the following electrochemical reaction:

As the solid iron Fe donates its electrons to the hydrogen ions, it evolves into its oxidized form and turns into Fe2+ ions. Here is the corresponding reaction:

These reactions are called redox reactions, or reduction-oxidation reactions. They always involve two components: an oxidizer that accepts electrons and a reducer that donates them.

What happens when we place a magnet under the bottom of the cup?

Iron filings are attracted to the magnet, which we hold on the outside of the bottom of the cup. The filings turn into fancy needles: the closer to the center of the magnet, the sharper and taller the needles. Such an arrangement isn’t by chance: the filings are arranged around the magnet along certain axes.

This magnetization occurs due to the specific structure of the iron atom.

Only three elements, because of their unique structure, can be permanent magnets: namely, iron, nickel, and cobalt. Their atoms contain charged particles – electrons. The electrons rotate around a nucleus in the same direction and, thus, create a magnetic field. Substances, which create magnetic fields, are called ferromagnetic

Each magnet has two poles (north and south), which are always found on opposite ends. The force of the field is directed from the north pole towards the south pole. Although a human eye can’t see a magnetic field, this experiment demonstrates what it “looks” like.

Why did the solution change its color as we added hydrogen peroxide and potassium hexacyanoferrate?

During the last stage of our experiment, we witnessed two reactions simultaneously. Let’s examine them separately.

The first reaction is that of ferrous iron and hydrogen peroxide H2O2 commonly used as an antiseptic medicine. Upon reaction with H2O2, the Fe2+ ions are oxidized and form Fe3+ ions. However, the Fe3+ ions remain bound to the citrate ions, and it is this complex that produces the deep yellow color of the solution. Simultaneously, as the hydrogen peroxide is reduced, its molecules are transformed into water molecules.

The second reaction takes place between our mixture and that of potassium hexacyanoferrate K4[Fe(CN)6]. When potassium hexacyanoferrate is added to the solution, it turns bright blue at the place where drops are deposited. This beautiful color is due to very fine granules of so-called Prussian blue. Prussian blue is a water-insoluble pigment with a complex formula based on KFe[Fe(CN)6]. The last, but nonetheless quite important, participant of this reaction is the oxygen from the ambient air.

The formation of Prussian blue occurs even when there is only a tiny number of iron ions in the solution. As a result, this reaction is used in qualitative tests to determine Fe2+ ions.

Iron: the chemistry of the forge

Do you know what a forge is and what a blacksmith does? Forges have already fallen widely out of use, and are now employed almost exclusively in hand forging and other handmade crafts. So what is a forge and how does it work? A forge is a workspace in which fire is used to heat metal until it becomes soft enough to work into different shapes. The person who works with this metal is called a smith. If they work, for example, with iron or steel, then they are called a blacksmith. The smithing process first arises in written record around 1500 BC. Little has changed since then. To shape iron using a hammer, it must be heated to a very high temperature. As iron cools rapidly, a blacksmith must work quickly and efficiently. Forges use charcoal or coal as fuel. A device known as a bellows, which pushes air through the forge, is used to make the fire burn at a higher temperature. The blacksmith puts pieces of iron into the fire to heat them, then retrieves them, strikes them with a hammer, and puts them back into the fire. This process repeats until the iron reaches the needed shape.

To obtain steel (steel is iron with a small quantity of carbon), the heated iron is placed in a container with burnt bones and coal, then heated to approximately 950 oC. This enriches the metal’s surface with carbon. The blacksmith then "tempers" the steel to make it less brittle. The blacksmith heats the steel in the fire once more, but more slowly. When the steel reaches between 150 and 350 oC, it changes color. If heated further, it will turn first yellow, then brown, then purple, then blue. When the steel reaches the needed color, it is cooled with water. Work in the forge requires a lot of attention and strength. Current manufacturing processes involve alloying additional chemical elements with steel, such as chromium, nickel, copper, manganese, silicon, tungsten, cobalt, phosphorus, titanium, vanadium, molybdenum, and aluminum. Different elements yield alloys with different properties. For example, adding silicon and manganese increases steel’s strength and elasticity, while nickel helps to preserve its ductility at low temperatures.