Watch a piece of marble glow!

This experiment is included into Calcium kit along with Calcium flame and Calcium silicate. Subscribe and get everything you need to do this experiment at home.

Put on protective gloves and eyewear. Conduct the experiment on the plastic tray.

First, make sure you are performing the experiment in a relatively dark room. The room doesn’t need to be completely dark, but the lights should be at least dimmed to make the results more easily visible.

You can also try taking the piece of marble in the holder out of the flame after 15-20 seconds. It’s easier to see the marble glowing when it’s framed against a dark backdrop instead of the fire.

Also, try holding the stone in the flame 20-30 seconds longer. Incidentally, you can take the stone out, observe it a bit (without letting it cool down completely), then continue heating it to watch it glow some more. Just keep in mind that this process will only continue for 1-2 minutes. Check out the Scientific Description section of this experiment to learn more about this phenomenon.

To observe thermoluminescence, take a piece of marble and some solid fuel. 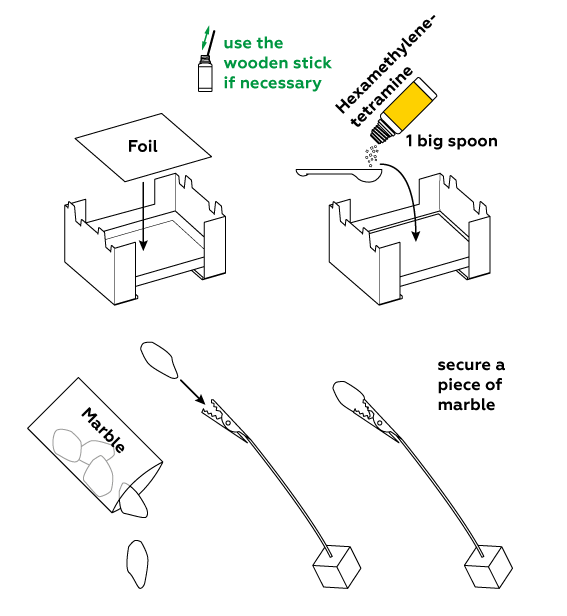 When heated, the marble releases some of the energy “locked” inside it. 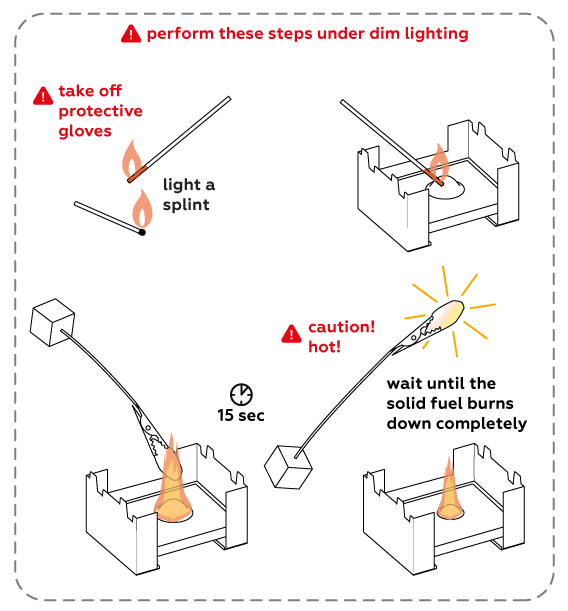 Marble is a form of calcium carbonate CaCO3. Synthesizing this compound isn’t difficult, but natural minerals possess some interesting properties that are not so easily reproduced. For example, over hundreds of years, natural minerals

are constantly exposed to small doses of radiation

. Though this influence is relatively weak, the total amount of radiation absorbed by a piece of marble that has been lying in the ground for centuries can be perceptible.

Radiation doesn't make the marble radioactive though. Instead, some of the electrons in it receive enough energy to occupy so-called "excited" states

. The electrons in marble can be trapped this way for long periods of time. But if the rock is heated, all the atoms in it start shaking and wiggling like crazy, and the electrons drop from their "excited" states, releasing some of their accumulated energy in the form of visible light

There's definitely not enough energy in this light to merit the trouble of heating rocks to get it, but this property does have another interesting application. If you carefully measure the amount of light produced by a piece of heated marble, you can estimate the amount of time it took to accumulate it, i. e., determine the age of a particular rock. "Hey, marble, how old are you?" "

Marble, particularly white marble, has been used in sculpture since ancient times.

Marble is also widely known for its use in famous architectural structures. For example, the fourth largest church in the world, Milan Cathedral (also known as Duomo, or Duomo di Milano), is made of thousands of marble blocks. You might also be familiar with the Taj Mahal mausoleum, with its towering marble dome.

It would be difficult to produce marble in the laboratory the same way it forms in nature – the natural processes take thousands of years under high pressures and temperatures in the Earth’s crust. And indeed, marble exhibits some interesting properties that an ordinary piece of calcium carbonate does not.

What is the glowing we observe and why does it appear?

In brief, natural marble accumulates energy during the years it exists in the earth’s crust. It is exposed to small doses of radiation over time; this doesn’t make the marble radioactive but instead lends some of the atoms in its structure a bit of extra energy.

To specify a bit, some electrons in these atoms get trapped in a so-called excited state, in which they possess more energy than normal. Most of the electrons lose this energy over time, but some of them (due to complicated reasons) do not.

When we heat our piece of marble, certain changes occur internally that allow this extra energy to escape; the electrons finally give the excess energy away, returning to their normal states. We can observe this energy release in the form of a dim orange glow.

After 1-2 minutes of exposure to heat, the piece of marble will stop glowing, as all of its excited electrons will have reverted to their non-excited or ground state.

What is solid fuel and why do we use it here?

Solid fuel burns readily with a colorless flame, producing almost no smoke or smell but releasing a lot of heat. The colorless flame and lack of smoke help us clearly see the result of this experiment.

We use this solid fuel to provide our marble sample with the energy it needs to make this experiment possible.