Make a filter that can purify water of heavy metals!

This experiment is included into Pure water kit along with Carbon filter and Oxyhydrogen. Subscribe and get everything you need to do this experiment at home.

I poured resin into the pipette over the “3” mL mark. What should I do?

This isn’t a big deal. To remove the resin, pinch the filter at “3” mL mark and pour the excess resin back into the vial. Continue the experiment.

The second cotton cylinder is sticking out slightly. What should I do?

The cylinder shouldn’t stick out the top. Gently push it further in. You need to compress the resin well.

What do I need the first vial for?

You will use it to compare the properties of the unfiltered and filtered solutions. This way, you can check how effectively your filter works!

Can I use the filter after adding (NH4)2CO3?

Yes! We removed the copper using ammonium carbonate, so the resin can be reused. Pour a new solution of copper sulfate through the filter and collect the filtrate in a new vial.

Prepare a filter made of ion-exchange resin. To increase its effectiveness, compress the resin slightly using cotton cylinders and a wooden stick. 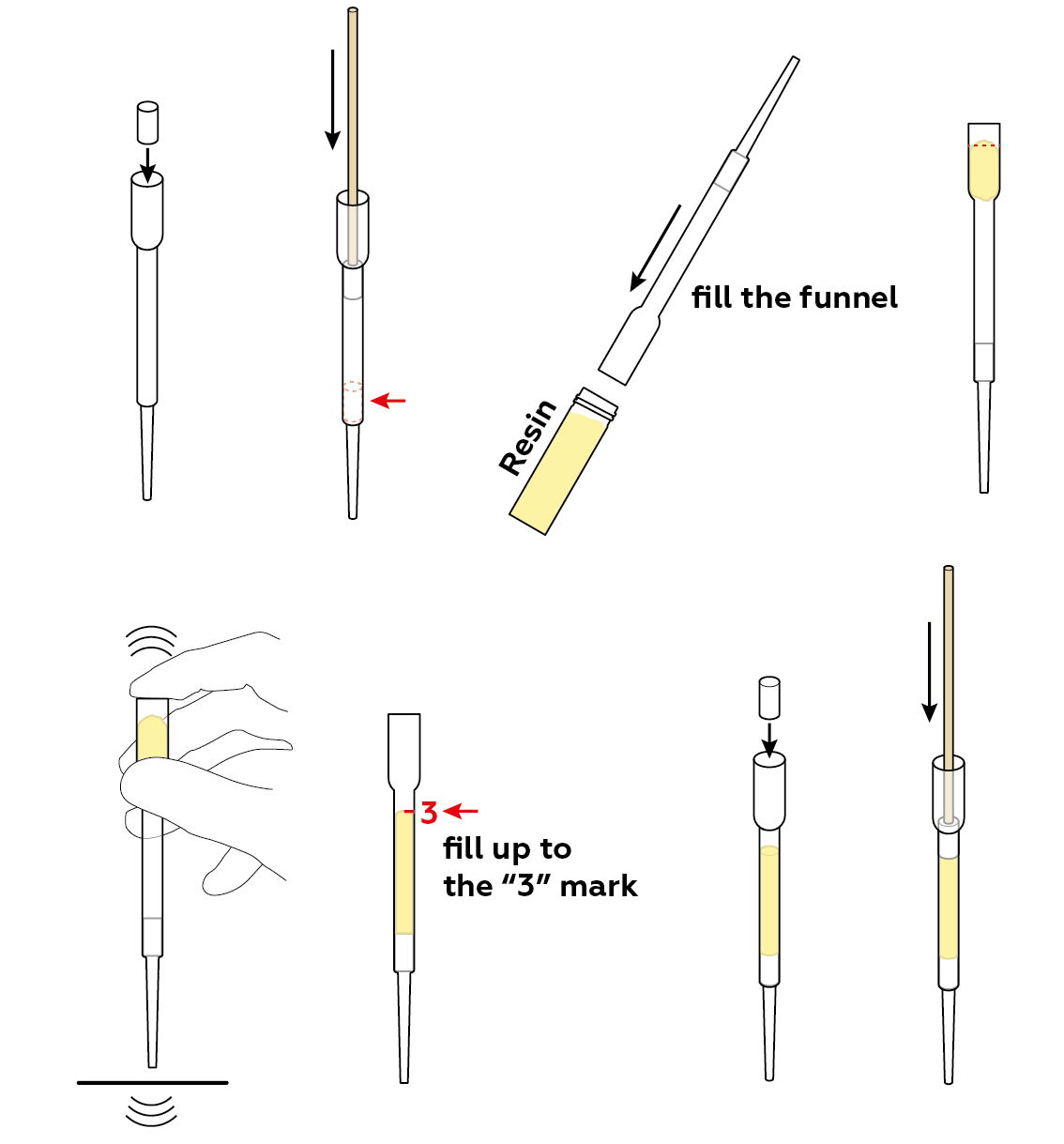 Set up the test stand.

Pour some of the tainted water straight into the first vial. You will need it later, to help assess the effectiveness of your filter.

Pour some of the tainted water through the filter into the second vial.

Now, perform a qualitative test for copper ions Cu²+ by adding ammonium carbonate (NH₄)₂CO₃ to the test vials. If a solution contains copper ions, the liquid will turn blue. If your filter succeeded in cleaning the water in the second vial, this water will remain clear.

What happens if you apply some ammonium carbonate to the filter? 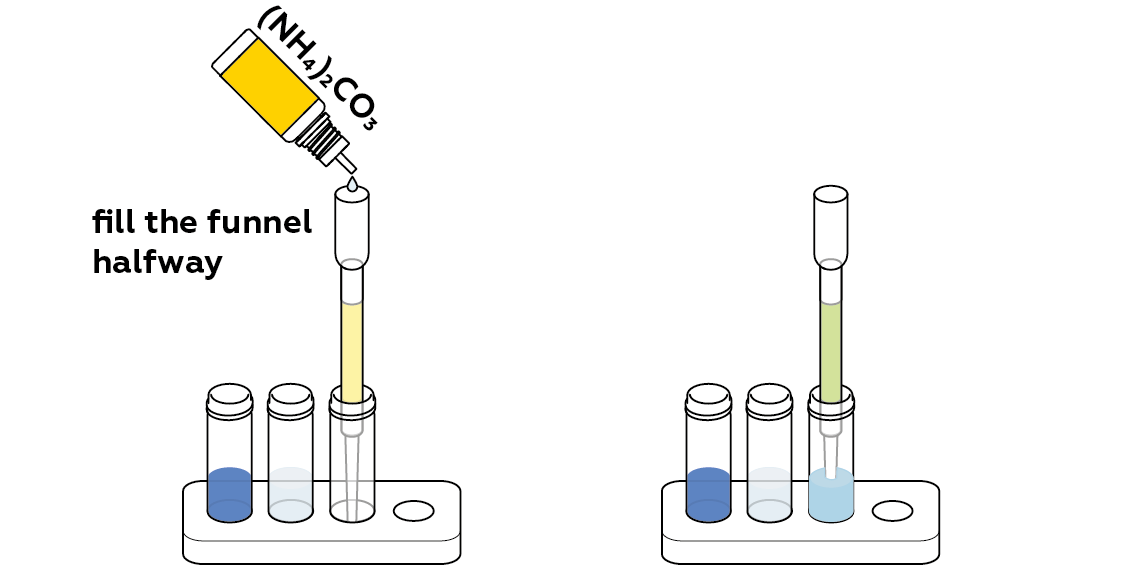 Wash both vials to repeat the experiment.

Your self-made filter with ion-exchange resin purifies water from ions of a heavy metal - copper.

The reaction between ammonium carbonate (NH4)2CO3 and copper ions Cu2+ changes the color of the initial solution from light-blue to deep indigo. The water sample purified through the filter remains colorless, proving the effectiveness of the filter.

Any copper ions left on the ion-exchange resin can be detected by adding a few drops of ammonium carbonate into the filter.

Power plants, factories, and cars all produce exhaust mixtures containing heavy metals. These exhausts don’t just pollute the air we breathe—they dirty our water as well. These heavy metal ions are harmful to our health, so they must be eliminated from drinking water.

We use copper ions

to test our filter because it is easy to identify them in a solution using a simple qualitative test. Resin-based filters work equally well on other heavy metal ions

These resins are long polymers with ions of alkali metals, such as sodium ions

, “attached” to them. The heavy metal ions

, clinging more tightly to the resin. Meanwhile, the water molecules

pass freely through. As a result, sodium ions

, safe to consume in small amounts, replace the more dangerous heavy metal ions in the water.

Though this filter is effective against heavy metals, it is powerless against many organic pollutants

. Activated carbon can take care of such materials, as you’ll see in another experiment from this set.

Why do metals replace each other?

The resin works via ion exchange, a reversible chemical process in which ions are exchanged between a solid and a solution. In our case, negatively-charged ions are rigidly attached to the matrix of resin grains. These ions are concentrated on the surface of the resin. They are balanced by positively-charged ions such as sodium Na+, which move freely through the pores of the resin.

In water, copper sulfate CuSO4 splits into ions: positively-charged Cu+2 and negatively-charged SO-4. As the polluted solution passes through the resin, the resin’s surface picks up metal Cu+2 ions, releasing sodium ions Na+ into the solution. Each grain of resin accumulates these charges to a certain limit, after which it must be cleansed of the unnecessary charged particles. To do this, a table salt NaCl solution is passed through the filter to remove the ions from the surface of the resin. The offending ions are washed down the drain, and the free space is repopulated by sodium ions once again. This is called regeneration or recycling of resin.

Heavy metals are a family of chemical elements mostly toxic to humans, especially if they are present in fairly large amounts. In water, they normally exist in the form of positively-charged particles (cations) — take, for example, copper Cu2+, lead Pb2+ or iron Fe3+.

Interestingly, our bodies need certain heavy metals in small quantities, such as iron Fe, zinc Zn, copper Cu, and molybdenum Mo. However, these can be harmful if accumulated in greater quantities. Meanwhile, such heavy metals as lead, cadmium, and mercury are harmful to our bodies even in small amounts.

Many heavy metals are found in water in the form of cations. These must be filtered out for water to be drinkable. We can use an ion-exchange resin filter to accomplish this.