This experiment is included into Egyptian night kit along with Iron pepper shaker. Subscribe and get everything you need to do this experiment at home.

Why do we need to leave the starch in cold water?

Since starch is not very soluble in water, we need to first make it swell a bit. This process is common for such substances as starch (known as polymers) and usually proceeds better in cold water.

What determines when the solution darkens?

This mainly depends on the temperature and the component concentrations. Check out what happens if you add 10 drops of sodium thiosulfate Na2S2O3 instead of 5, or 1 spoonful of potassium iodide KI instead of 2.

What if I don’t mix the final solution at all?

If you don’t mix the final solution, “night” will advance much more slowly. The solution will first darken to a brownish muddle, then eventually turn dark blue.

The solution darkened very slowly. Why?

This can happen if the reagents were added in the wrong proportions. It is not critical, but sometimes the reaction needs much more time to proceed this way. Try repeating the experiment, paying extra-close attention to the reagent amounts!

Prepare a starch solution. Starch is not very soluble in cold water, so you’ll need some hot water to dissolve it. Starch has a property that will come in handy soon: it turns very dark when it encounters iodine molecules I2. 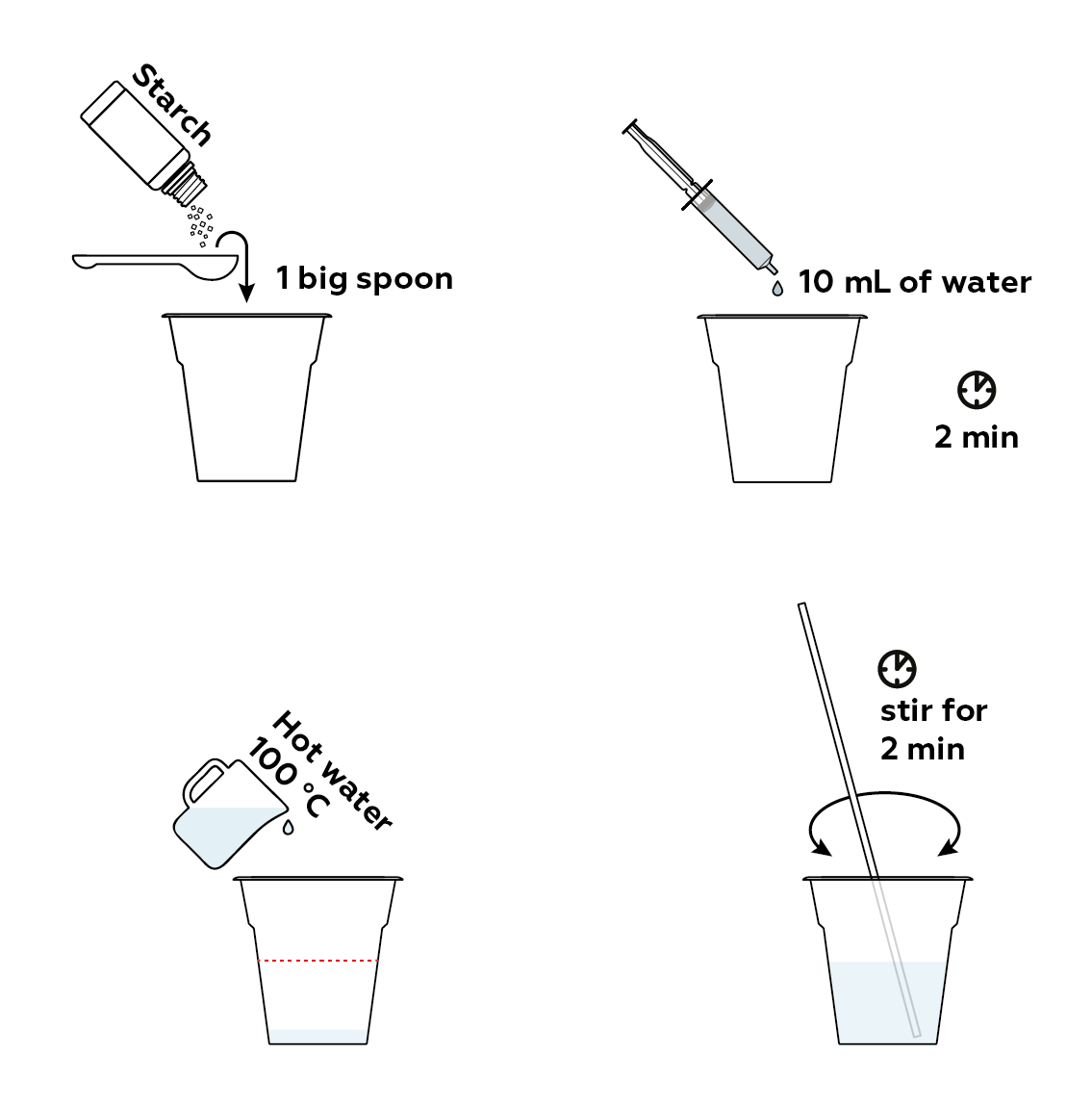 Prepare the first solution. It contains two reducing agents—components that are willing to give electrons away. Here, these agents are the thiosulfate ions S2O32- in Na2S2O3 and the iodide ions I- in KI. Be sure to add some starch, it's going to be your iodine detector. 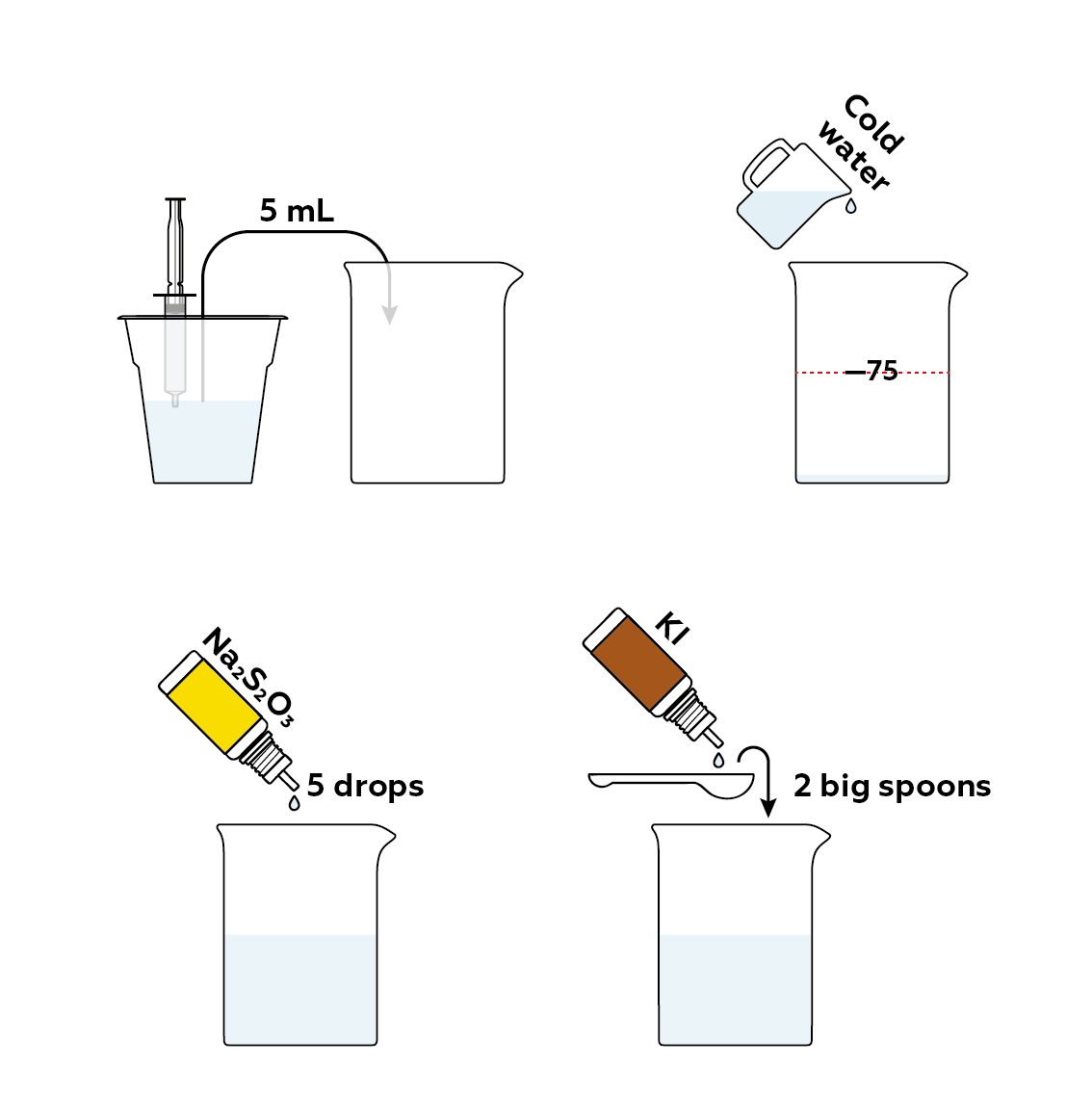 The second solution contains an oxidizing agent, a compound which is able to take electrons from other compounds. H2O2 fits this role perfectly. It isn't good at taking electrons from S2O32-, but I- ions can easily give their electrons to it, and turn into iodine I2. The process is more efficient if you add some NaHSO4. 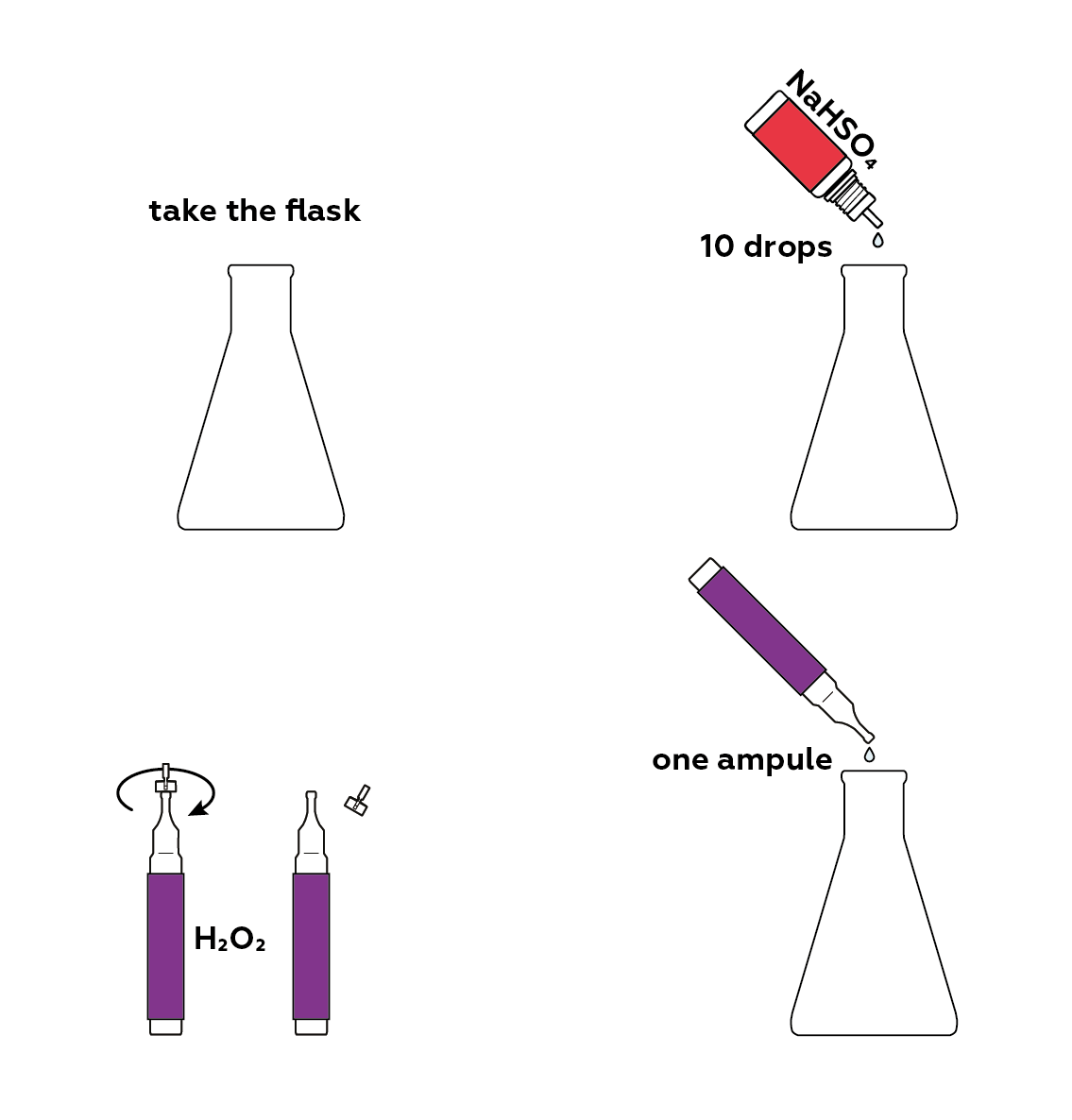 Mix the two solutions together, and watch closely! 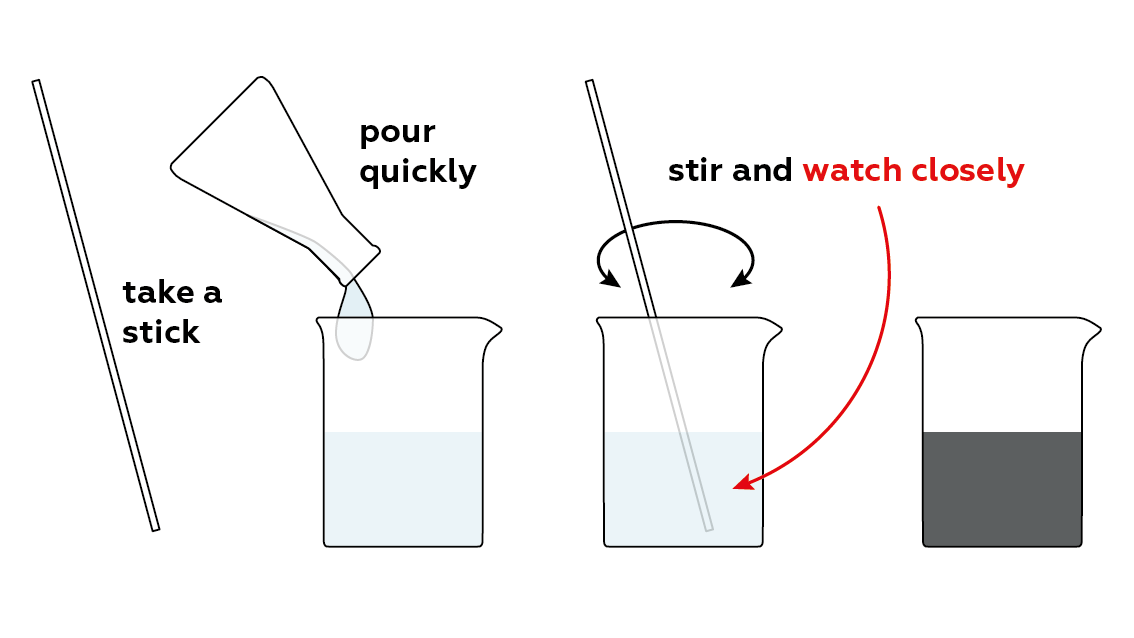 You don't want all that iodine I2 to go down the sink. Luckily, getting rid of it is pretty straightforward. Just add more Na2S2O3. It will turn the iodine I2 into iodide I-, allowing H2O2 to attack it until no H2O2 is left. When there's no H2O2 in the solution, I- will remain I-, which is pretty safe for the environment. And besides, it just looks cool.

The solution in the beaker suddenly turns deep blue.

You’d think that the H2O2

should have turned the I-

, and the I2 should have turned the starch black right away. But there's a twist: I2

is actually an oxidizing agent itself, and is really great at taking electrons from S2O32-

turns back into I-

before reacting with the starch

and turning black. I-

, and the cycle repeats again and again with no visible changes in the solution.

is left with nothing to take electrons from. It combines with the starch

, turning the solution black all at once.

Why does the solution darken?

The dark blue coloring of the resulting solution appears due to the formation of an intensely blue starch-iodine complex. To form this complex, three substances have to meet with one another: an iodide ion I–, molecular iodine I2, and starch. Iodine ions interact with molecular iodine, yielding complicated triiodide ions I3–. These ions are more soluble in water than iodine, so they easily bind to starch and yield the final blue product.

Starch is a polymer – a substance with very large and branchy molecules. It has a very complicated spatial structure and is often of vegetable origin – starch can be found in rice, potatoes, and corn. Plants use this substance as an emergency nutrient source. Chemically, starch molecules consist of glucose fragments, making starch a polymeric carbohydrate.

The interaction between starch molecules and triiodide ions is a qualitative reaction testing for the presence of starch. Thus, if you apply a solution containing I3– ions to a potato, you will see the same blue coloring, as potatoes are rich in starch.

What do we need the hydrogen peroxide for?

Hydrogen peroxide is a good oxidizer. This means that it is happy to take electrons from other substances around it. In this experiment, we also use it as an oxidizing agent.

What is the role of sodium hydrogen sulfate in the experiment?

Sodium hydrogen sulfate NaHSO4 can release protons H+ when dissolved in water, forming an acidic medium. This acidic medium is necessary for the reaction to take place.

However, it doesn’t stop there: the hydrogen sulfate ion can also split into two ions: a sulfate ion and a proton.

This resulting H+ is the proton that increases the acidity of the solution. The process of splitting into ions in water is called dissociation.

How are triiodide ions formed?

The next “ingredient” is iodine. It can form in the reaction between hydrogen peroxide and potassium iodide. Hydrogen peroxide acts as an oxidizer – it takes the electrons from the iodide ions, transforming them into iodine molecules. However, this process wouldn’t occur without sodium hydrogen sulfate NaHSO4, which makes the reaction mixture acidic and thereby facilitates the process.

So, we have both iodide ions and iodine molecules and a triiodide complex forms:

These processes proceed very fast; however, the reaction mixture doesn’t darken quite as quickly as one might expect. This is because of the presence of sodium thiosulfate Na2S2O3 – another key participant in the reaction.

What does sodium thiosulfate do?

In contrast to hydrogen peroxide, sodium thiosulfate is a reducing agent – it looks forward to sharing its electrons with any suitable substance. In our experiment, iodine is such a substance. Sodium thiosulfate reduces iodine to iodide ions, yielding sodium iodide:

Sodium thiosulfate immediately reduces all the iodine forming in the reaction with hydrogen peroxide; triiodide ions do not form and have no opportunity to interact with the starch, and the reaction mixture remains transparent.

However, when the sodium thiosulfate is used up, nothing can hinder the iodine formation and the consequent formation of triiodide ions. As a result, triiodide ions quickly accumulate in the reaction mixture, interacting with starch and yielding the blue starch-iodine complex.

Why do we need boiling water?

Starch is practically insoluble in cold water, which is why we have to heat our water to obtain the starch solution. The water molecules need this heat in order to penetrate between the starch molecules. This makes the polymer swell, then dissolve.

Molecules in cold water are rather sluggish, just like people who prefer staying home when the weather outside is cold.

Water molecules need some heat to become more energetic and leave their comfortable “houses.” In our case, the hot water in the beaker provides this heat. Thus, the water molecules in the vial start to explore more and more new places, even venturing into territory that was previously occupied by starch molecules. There’s nothing for the starch molecules to do but make room for all their unexpected water molecule guests. As a result, the starch swells and dissolves.

Why is this experiment called Egyptian Night?

In Egypt, night falls rapidly and completely, leaving the sky very dark after a sudden sunset. In our experiment, we mix two colorless solutions, and in just a few moments can observe as the solution turns dark blue, almost black. This is the source of the experiment’s poetic name.

This reaction is a version of chemical clock reactions – the moment when the solution changes its color can be calculated down to the second and depends on the quantity of reagents used for the reaction. The proportions of the substances used influence the rate of these changes. For instance, should we add half as much sodium thiosulfate, the solution will turn blue twice as slowly.

This experiment perfectly demonstrates the chemical law of mass action, in which the reaction

rate is directly proportional to the concentration of reagents

. The process will continue until we run out of components.