Make your own starch plastic!

This experiment is included into Chemistry of materials kit along with Plastics and iodine. Subscribe and get everything you need to do this experiment at home.

The mixture has thickened significantly. Won’t it stick to the beaker?

If the mixture has thickened, that means you’re doing everything correctly! Continue stirring it and keep the beaker on the stove. The mixture should thin again in about 15–20 minutes.

The thickened mixture is difficult to stir.

Use a towel or thick cloth to hold the beaker steady with one hand. This should make it easier to stir with your other hand.

How often should I stir the thickened mixture?

Stir it every few minutes. Try to stir out the lumps to make the structure as uniform as possible.

The penguin took hours to dry, and even now is still sticky. Why?

In some cases, such as if your work area is drafty, it’s possible the mixture didn’t warm up enough when you heated it on the stove. This will make it take longer to solidify, and may prevent it from solidifying completely no matter how much time passes. It’s best to try the experiment again, making sure the room isn’t drafty and the mixture heats up evenly and effectively.

I didn’t have enough time to pour the mixture into the mold. It solidified in the beaker. What should I do?

Don’t worry! First, try reheating the contents of the beaker. As soon as the mixture is liquidy again, immediately pour it into the mold. Starch solidifies as it cools.

If this doesn’t work, repeat the experiment and heat the mixture for a shorter amount of time.

I know that potatoes contain starch. Can I use them for this experiment?

Of course! If you extract the starch first.

Take a raw potato (medium-sized should be fine) and grate it into a bowl. Add 150 mL of water and stir for 5 minutes.

Cover your beaker with two layers of cheesecloth and carefully strain the liquid into the beaker. Squeeze the cheesecloth and set the grated potatoes aside. You only need the potato water to obtain the starch.

Allow the starch to settle for about 20 minutes. With time, the starch will settle at the bottom of the beaker. The water may acquire a brown tint.

Carefully pour out the excess water. Most of the starch will have precipitated to the bottom of the beaker. Still, avoid agitating the water as much as possible.

Now you can make a penguin from the starch you obtained!

I would like to repeat the experiment, but I’m out of reagents. What can I do?

First, check out the FAQ to learn how to extract your own starch from a potato! You’ll also need citric acid, which you probably already have in your kitchen, and over-the-counter glycerol.

After obtaining your starch, measure about 1 g (half a teaspoon) of citric acid and 4–5 mL of glycerol into the beaker. Add 20 mL of water and a couple drops of thymol blue or any food coloring. And there’s your mixture! Put the beaker on the flame diffuser and continue the experiment according to the instructions.

Can I touch the unfinished penguin without gloves? And when it’s finished?

This is a chemical experiment, so it should be conducted using the relevant protective equipment.

You can safely play with the penguin when it’s dry. Please note: if you used methyl orange in your experiment, avoid touching the penguin without gloves.

Yes. But over time, it will dry out and shrink. After a while, it may even crack. But you can always repeat the experiment using ingredients you probably already have in your kitchen!

The beaker is on the stove. I can see steam and feel a faint smell. Is everything okay?

Everything’s okay! This steam is water from the heated mixture, and the slight smell is due to reaction products captured in the steam.

Can the mixture thicken again after thinning?

This can happen if you leave the beaker on the stove for more than 25 minutes and too much water evaporates. If this happens, we recommend restarting the experiment from the beginning.

How can I be sure that the mixture is liquid enough to pour into the plastic mold?

If you can’t see any big lumps in the mixture, and if it flows easily and is easy to stir, then you can pour it into the plastic mold.

I’ve poured the mixture into the plastic mold. How should I clean the beaker?

You can clean the beaker by letting it soak in hot or boiling water for 15 minutes. After that, any remaining traces of the mixture should be easy to wash away. Now you can use the beaker for your other experiments!

The three main components you need to make starch plastic are glycerol, some acid, and the starch itself. 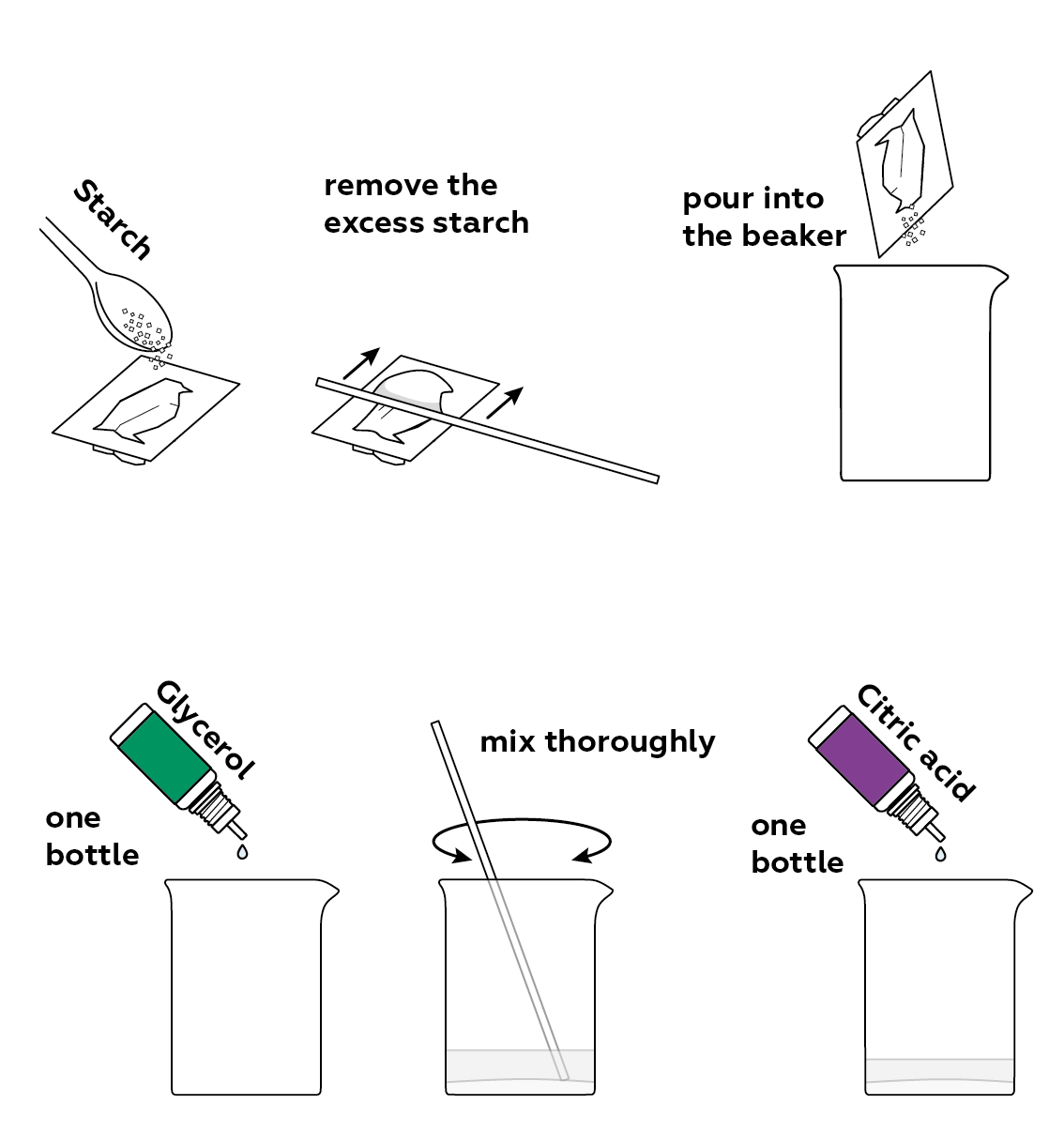 Now you basically just need to heat the mixture. 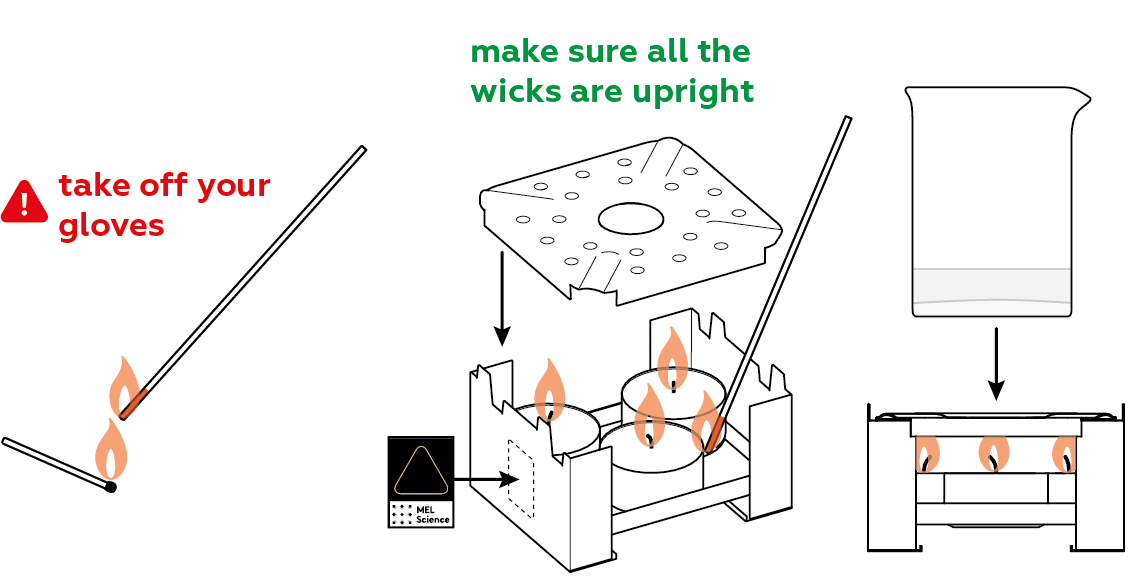 At first, the mixture becomes extremely viscous. That's because starch completely dissolves in water, and it's very good at making viscous solutions. 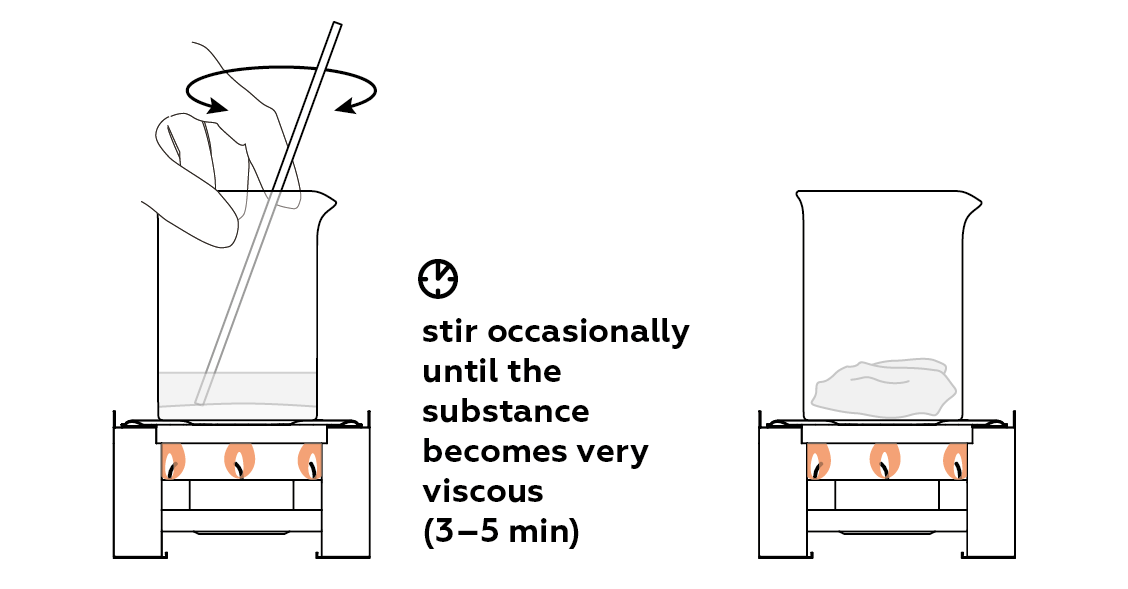 When the mixture turns liquidy again, you can pour it into the mold and let it cool and set. 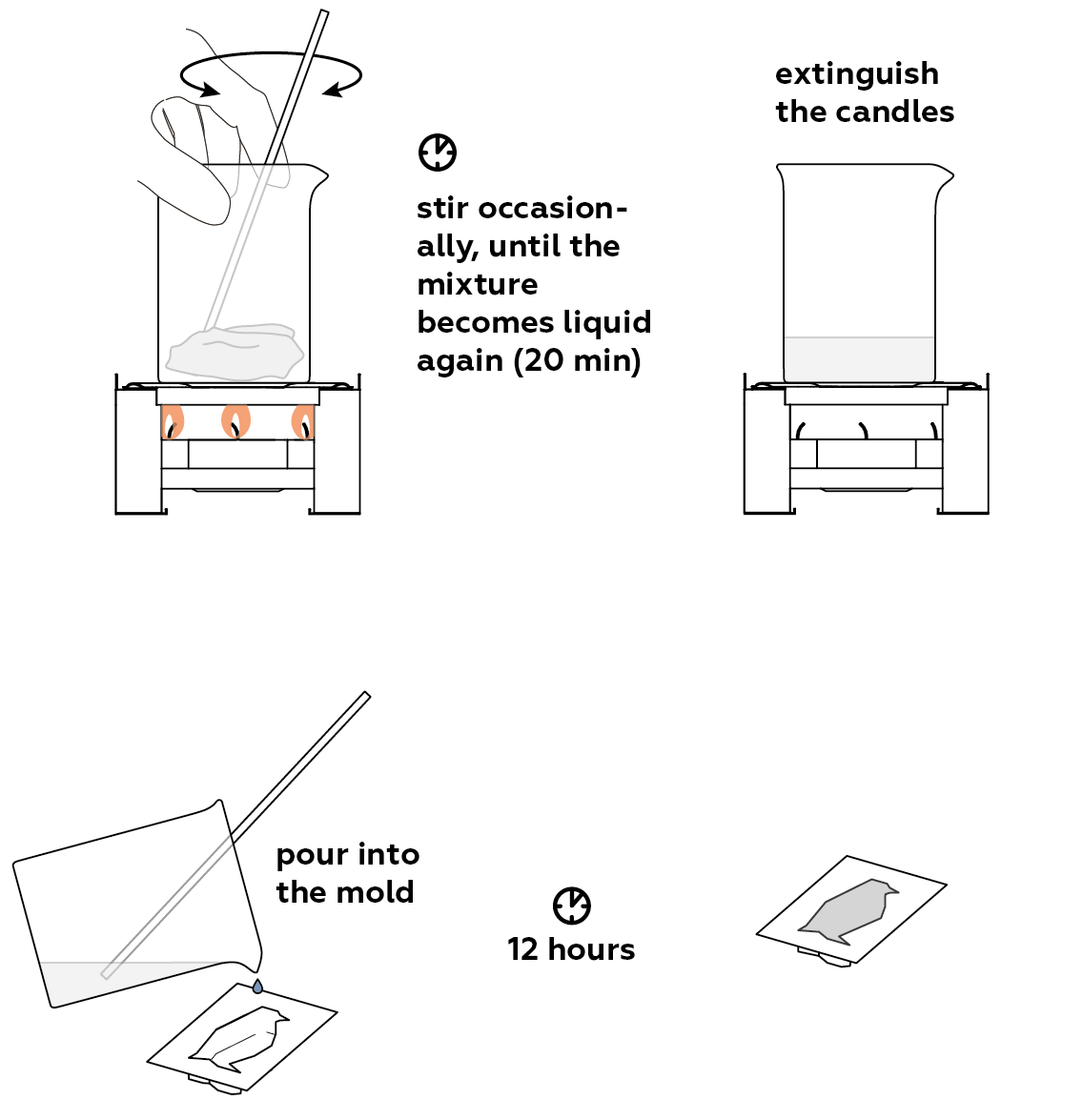 Enjoy your rubbery-yet-solid figurine made of starch plastic!

Most plastics are polymers, that is, insanely long molecules

. Normally, plastics are made by stringing these monomer pieces together

until the polymer chains reach just the right size to make plastic both strong and elastic.

Starch is also a polymer, but its molecules

are way too long to make a decent plastic; it would be too stiff and would crumble long before solidifying completely. To fix this, we need to do the opposite of the polymerization normally conducted during plastic production—we need to shorten the polymer chains. Starch molecules can be chopped into smaller pieces using acid

. When the chains are of the right size, our liquid plastic can be poured into a mold to cool and solidify.

Common plastics are made of petroleum products, and oil is a finite resource. Starch plastic, on the other hand, is derived from corn, potatoes and other plants. For this reason, starch plastics (and other bioplastics), although still rare, are becoming more prominent members of the plastic family.

Starch is a naturally-occurring compound widely used in the food, farm, technical, and pharmaceutical industries. The most common sources of starch are potatoes and corn, but it is also produced from rice, wheat, and sorghum.

Starch belongs to the carbohydrate family. Carbohydrates are vital to human life; we wouldn’t survive without them. You might already be familiar with such carbohydrates as sucrose, glucose, and fructose, which make fruits taste sweet. Additionally, regular white granulated sugar is actually comprised of sucrose crystals. Starch, however, being a polymer, differs from these sugars somewhat.

What is a polymer?

Such a comparison is no coincidence: indeed, a polymer molecule closely resembles a chain made up of numerous links. Polymer molecules tend to be quite flexible, and in a solution, they can tangle into odd structures and knots.

While many carbohydrates taste sweet, starch by itself is quite bland. Even so, if you keep a piece of unsweetened starchy food (such as bread or potato) in your mouth for some time, you will begin to notice a faint sweetness. This happens as saliva starts to break down the long chains of starch into smaller molecules, which are essentially sugars.

What happens to the starch?

As we just discovered, molecules of starch can partially decompose when exposed to saliva. The bonds between the links in the starch can also be broken down via exposure to an aqueous acidic solution.

That’s exactly what we do in this experiment. Initially, starch is structurally quite complex: its numerous long chains are tangled with each other, and in some places, these tangles are “stitched” or connected together via “bridge” connections between the main chains. Acid breaks these bonds down, even breaking down some of the long chains themselves.

As a result, the structure of the starch is somewhat modified, and it morphs from a solid compound into a moldable mass.

Why does starch first aggregate into a lump, and only then turn into a thick liquid?

The acid’s effect on starch has a gradual progression. At first, when heated, small particles of starch aggregate into one big lump. The mass becomes quite dense and difficult to stir. However, the acid gradually breaks down the bonds linking the starch particles, and the lump turns into a thick and viscous mass, slowly becoming quite fluid.

Why does the liquid solidify into a pliable mass?

This happens for two reasons:

First, with time, the liquid cools down and the molecules of starch become less mobile. They settle tightly together into closely-packed structures.

Second, the material begins to dry. As fewer and fewer molecules of water are left between the starch molecules, the starch begins to harden and thicken, slowly transitioning from a liquid to a pliable material.

Why is the penguin rather squishy?

Actually, it’s all thanks to glycerol. The glycerol stops the hardening or thickening process. Otherwise, the mixture would have continued to thicken, and our material would have become as solid and fragile as a crumbly cookie. Once dry, the figure would simply have fallen to pieces.

In order to prevent this, we needed to partially separate the starch molecules from one another. Water cannot serve this purpose because it easily evaporates, but glycerol can. Although glycerol is heavier than water, its molecules are just as comfortable among starch molecules as water is. Moreover, glycerol does not evaporate as easily. Therefore, glycerol acts to guard the plastic consistency of the material, and it can be called a plasticizer.