This experiment is included into Alchemy kit along with Copper Dendrite and Copper Mirror. Subscribe and get everything you need to do this experiment at home.

Is it possible to carry out these transformations in the opposite direction?

Did you think that the “magical” transformations were over? Far from it!

To turn a “silver” or “gold” ring back into a copper one, you need to immerse it in an acid (you might be able to find citric acid in your kitchen, for instance). As you may recall, the "silver" coating on your ring is just a layer of zinc covering the copper, and the "gold" is brass, which is a layer of mixed copper and zinc particles. Acids will react with zinc, changing its form from metallic to ionic, and leave copper untouched. As a result, only pure copper will be left on the surface of the ring.

But what if you want to turn a “gold” ring back into a “silver” one? No problem! Try to coat it with zinc just like you did at the beginning of the experiment. This coating should stick well to brass, too!

Try all the possible options and enjoy your new status as "alchemist: master of the Philosopher's Stone"!

You're going to need a lot of heat for this experiment. Solid fuel can provide just enough.

Add some zinc sulfate ZnSO4 solution—it contains Zn2+ ions. Ammonium chloride NH4Cl will help them move through the solution and interact with the other participants of this reaction. 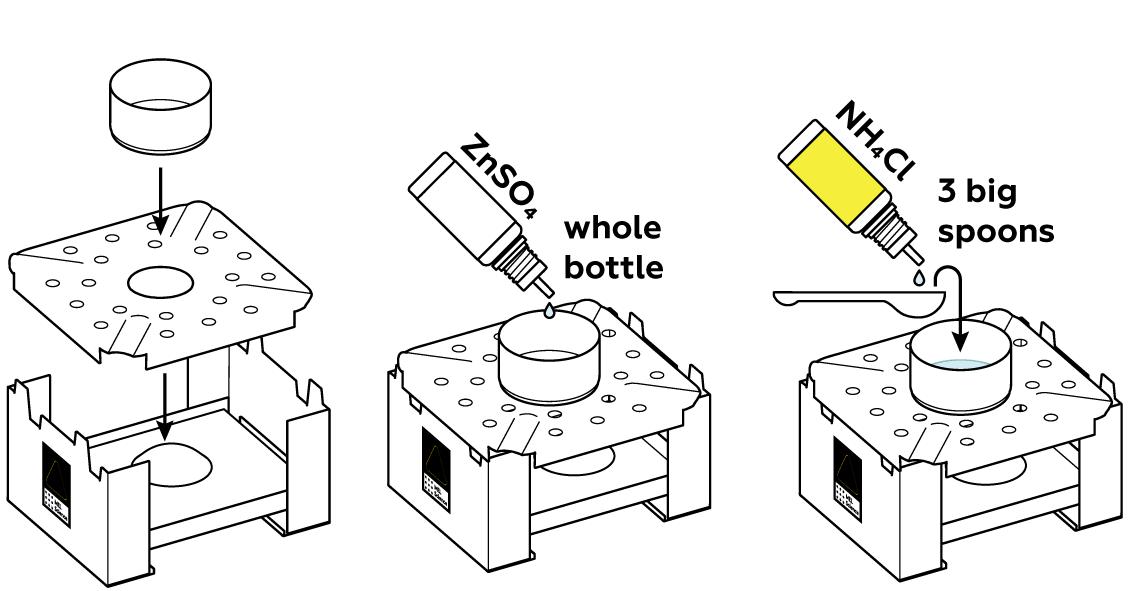 Put a copper Cu ring and zinc Zn rod in the mold. The Zn that makes up the rod and Zn2+ in the solution are two different forms of the same element: Zn particles are covered by an electron blanket, while Zn2+ float freely in the solution. Instead of a copper ring, you can use a copper coin—just make sure to wipe it clean. 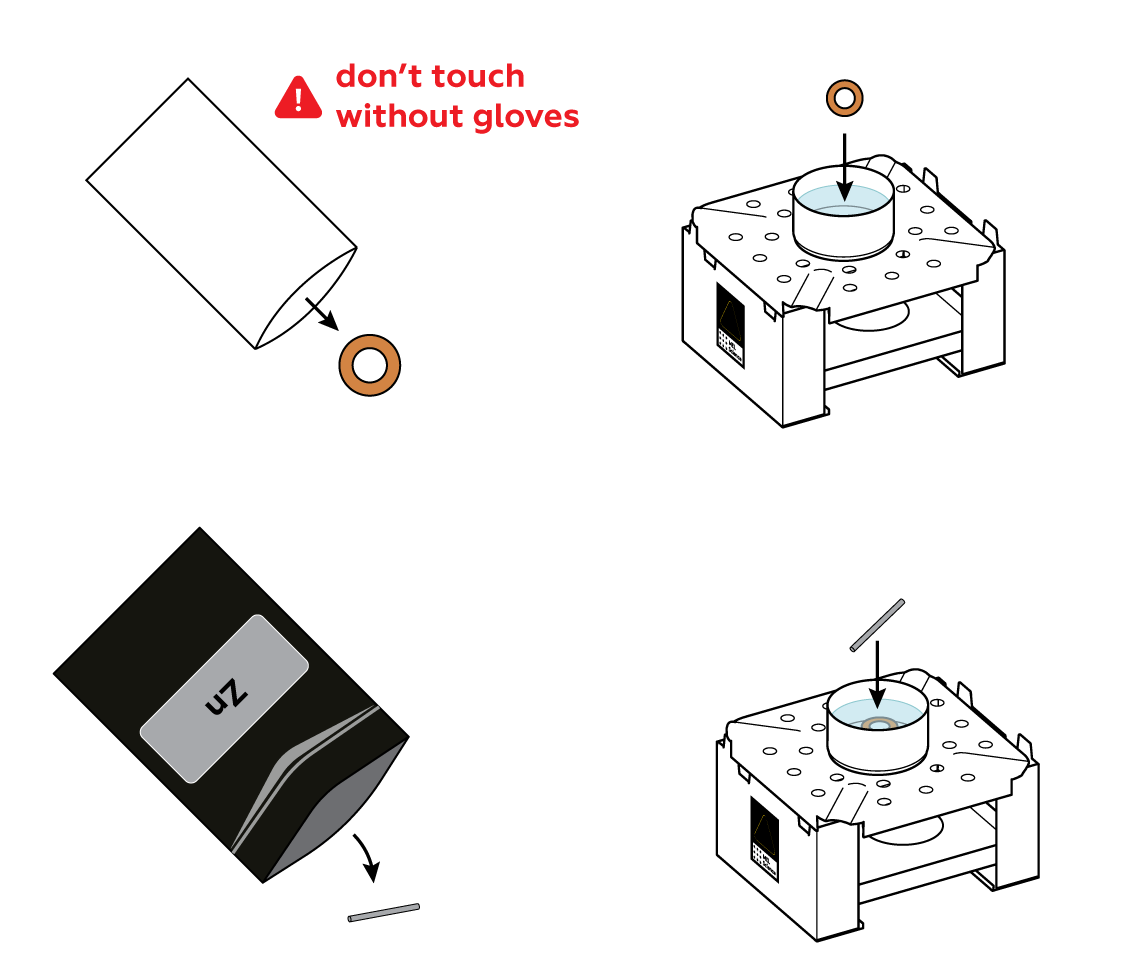 The copper ring turns silvery right before your very eyes! 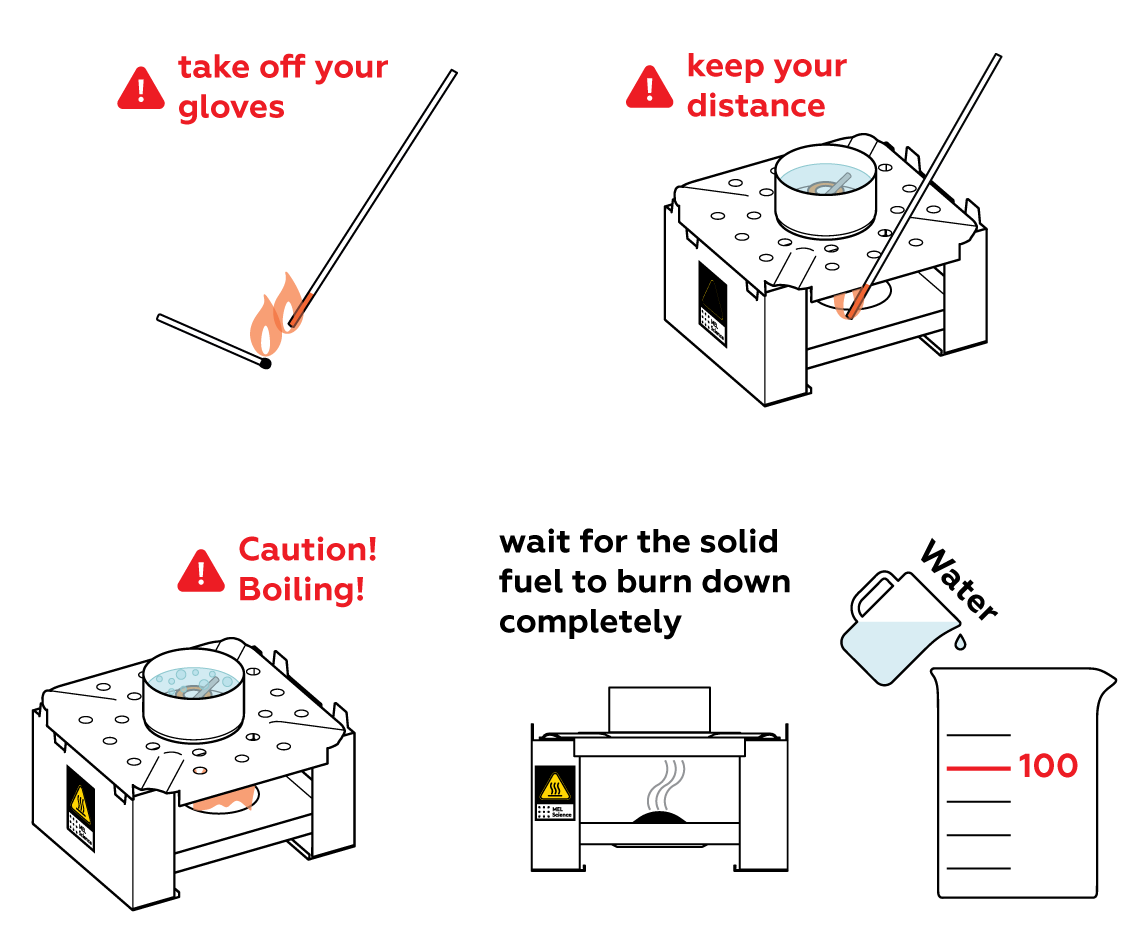 To make the ring look even fancier, rinse it with water. But did you really manage to convert copper into silver?

For centuries, the chemists of the past—alchemists—strove to transform cheap and abundant metals like copper into rare and valuable silver and gold. But little did they know that their task was absolutely hopeless! With later scientific advancements, it became clear that chemistry can only rearrange atoms, not convert them into one another. Was the mysterious transformation you just witnessed simply an example of such a rearrangement?

Yes! Both the zinc Zn

and the copper Cu

exist in the form of positively-charged particles (

), enveloped in a cloud of negatively-charged electrons

are more mobile than the particles of copper

—when heated, they begin jumping out of this cloud into the solution

and settling back down

. But occasionally, they settle on the copper

instead of the zinc, since their electron clouds are too close to each other. As a result, the copper ring is covered with a layer of zinc

The ring is still "silver," not "gold"—can you transform it further? Yes! In fact, it's surprisingly easy! If you carefully heat the ring with a candle, zinc particles from the surface will “sink” into the copper atoms underneath, resulting in a surface made of a mixture of the two

. This mixture of zinc and copper is called "brass," and it looks pretty golden!

Although it's impossible to make a different element by merely rearranging atoms, modern science knows how to change the atoms themselves! Today's nuclear physicists can routinely turn one element into another. But that's a completely different story...

How can we actually turn something into gold?

Since chemistry studies the rearrangement of atoms, but not the transformations of the atoms themselves, it is powerless when it comes to obtaining gold from other elements. That's a task for nuclear physics! In a nuclear reactor, some elements are converted into others; for example, uranium can be turned into plutonium, and sulfur into chlorine. Making artificial gold is also possible... But is this a game worth playing?

The most affordable way to make artificial gold is via the radioactive decay of its neighbors in the Periodic Table – mercury and platinum. The transformation of platinum into gold is extremely unprofitable, since the former is more expensive. And even though mercury is cheaper, the transformation process is extremely expensive and laborious, while only a small quantity of the "noble metal" can be obtained this way. Thus, the mining of gold in nuclear reactors is possible yet not feasible, since for now the process of making gold using nuclear reactions is more expensive than the gold itself.

Traditionally, gold medals are awarded for first place, silver for second, and bronze for third. But why?

To begin with, bronze is an alloy that consists of approximately 80% copper and 20% tin. And if we look at the Periodic Table, we’ll see that copper Cu, silver Ag, and gold Au are located in the same column. The Periodic Table is organized in such a way that elements in the same column tend to have similar properties. What these “olympic” metals have in common is that they can be found in a pure form in nature. This is in contrast to other metals, which are usually only found in nature in the form of complex compounds. These metals are also quite malleable, which makes them suitable for the production of such items as Olympic medals.

But the similarity in properties is not the only thing that the Periodic Table tells us about these metals. Elements are arranged in the Periodic Table in ascending order of mass. This also shows how abundant they are. Therefore, as copper is the lightest of the three, we can conclude that it is much more widespread in the Earth’s crust. Silver is slightly less common, being one level of the Periodic Table down, and gold is the rarest, possessing the highest atomic number of these three precious metals.

So the order of the medals, increasing in importance from bronze to silver to gold, is based on the rarity of these elements, while their selection as medal materials is based on their physical properties.

However, modern Olympic gold medals are actually made of mostly silver. The gold color comes from the 6 grams of pure gold used to gild the outside, making up just over 1% of the medal’s total volume.