This experiment is included into Chemistry & electricity kit along with daniell galvanic cell. Subscribe and get everything you need to do this experiment at home.

The lemon juice near the magnesium strip is hissing. Is this normal?

Yes, that’s alright. Magnesium is an active metal, and it is reacting with the citric acid in the lemon juice. This reaction yields magnesium citrate and releases hydrogen gas, which is making the hissing sound.

I don't have a whole lemon. Will a piece be enough?

Don't worry; use the piece of the lemon you have. Just make sure that the magnesium and copper aren’t touching each other.

Second, check that the LED is connected correctly: the black crocodile clip should be connected to the short “leg,” and the red clip to the long one.

Copper citrate
Electricity vs. Iron
Why so blue?
Alchemy 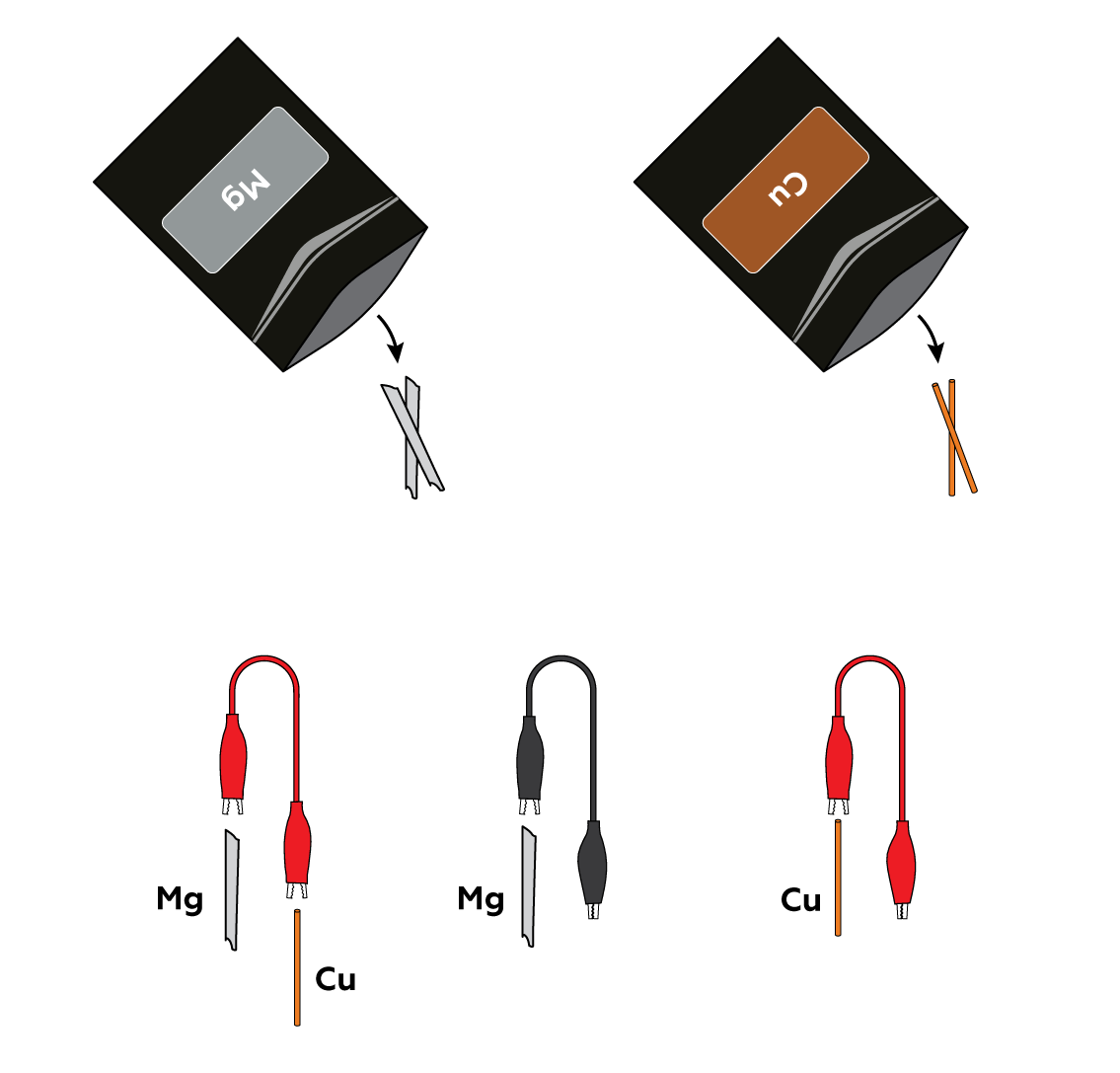 Insert the metals into the pulpy section of the lemon.

Connect the LED to the crocodile clips. Voila! You’re powering the LED with help of the lemon! 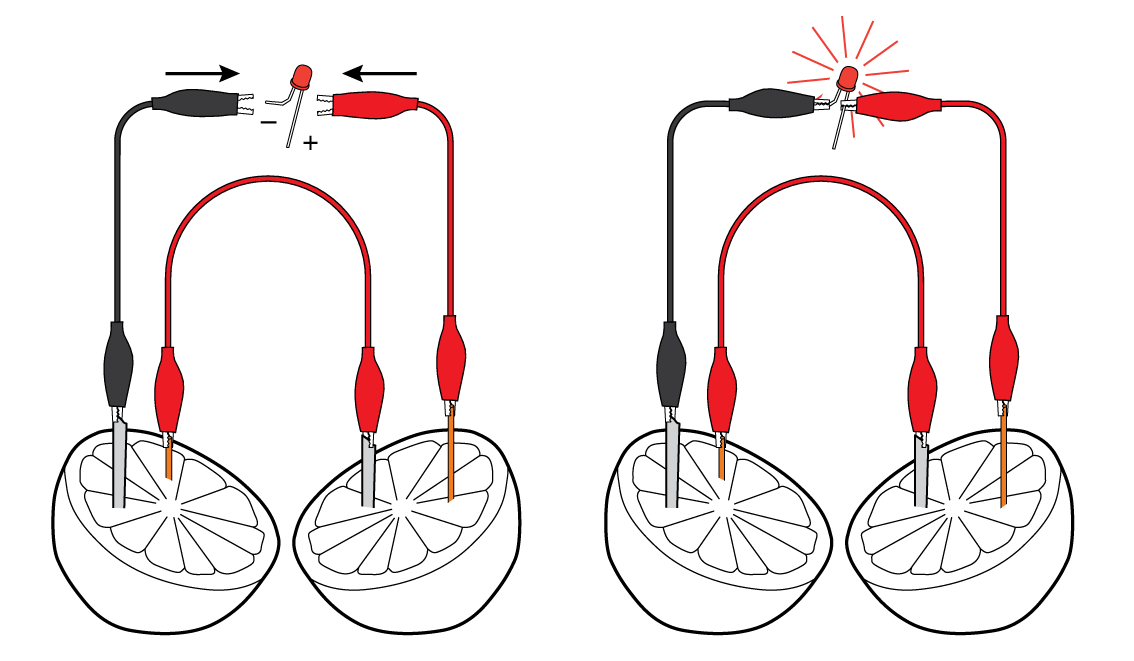 If a lemon battery can power a diode, it might seem that with enough lemons you could power your entire house. But don't go buying a ton of lemons just yet! As it turns out, the lemon's role in a "lemon battery" is not as prominent as it may seem. It's the two pieces of different metals submerged in lemon juice that are producing electricity.

, but metals are special—they allow some of their electrons to move freely inside–and even amongst–themselves. Moreover, electrons cling to different metals differently. Copper, for example, can easily lure some electrons away from magnesium through the wire

, thus creating electric current. Magnesium on its own, however, won't let its electrons leave. That's where the lemon comes in. Tiny magnesium particles with some electrons missing (magnesium ions Mg2+

) can abandon the metal chunk for the lemon juice, leaving the spare electrons free to go from Mg to Cu. To accept these Mg2+ ions

, the lemon juice has to get rid of some other + (positive) ions. Luckily, lemon juice contains a lot of citric acid, which can yield H+ ions

as acids do. Some of these ions can take electrons from the copper

and turn into hydrogen molecules H2

. They form hydrogen gas bubbles and leave the solution. The electrons will thus flow through the wire, making the diode light up, until the piece of magnesium dissolves completely.

How else can you make your own battery?

What if you desperately needed electricity but didn’t have any copper Cu or magnesium Mg? No worries! Some other pairs of metals would work just fine. To choose a good pair, you can use the chart chemists call the "metal reactivity series." A metal in this series will give electrons to any of the metals to its right (just like magnesium Mg gave electrons to copper Cu), and the farther apart the metals are in the series, the better they will push electrons through the wire.

If, perchance, you're out of lemons too, you can use any juicy fruit, vegetable, or even any solution that contains a lot of ions. Salt water, soda, or juice would work just fine.

How about a cucumber aluminum-silver battery? Or a soda zinc-gold one? Invent your own battery using the stuff you have at home! You can even use two cells to power an LED, like in the "Daniell cell" experiment. Keep in mind that the more reactive metal will slowly dissolve in the process, making the fruit or liquid you use unsuitable for consumption.

How does this cell work?

The working principle of the cell is based on the difference in reactivity between copper and magnesium. Magnesium is a rather reactive metal; its atoms readily get rid of two electrons to form magnesium ions Mg2+. As these magnesium atoms develop a shortage of electrons, the strip develops a positive charge.

Copper is less reactive than magnesium, so if these two metals are included in the same electric cell, the electrons will travel from magnesium to copper – through the LED. This shift is what makes the LED work. Since electrons are negatively-charged particles, the copper wire accumulates an excessive negative charge.

Neither metal is comfortable under such conditions, and here the lemon comes into play. Or, rather, not the lemon itself, but the lemon juice, which contains citric acid. In a solution, citric acid partially dissociates into citrate anions and hydrogen ions H+ (or protons). In other words, it acts as an electrolyte solution – a solution that can conduct electricity. These protons take the excess of electrons from the copper wire to form hydrogen molecules:

At the same time, positively-charged magnesium ions leave the magnesium strip and pass into the solution, which causes the magnesium to gradually dissolve:

The process will continue until the magnesium strip dissolves completely.

How does an electrolyte solution work?

An electrolyte is usually a substance which can split into ions when dissolved. The resulting solution is called an electrolyte solution. Incidentally, citric acid is not the only substance that can act as an electrolyte. The same can be said for sodium chloride or almost any other water-soluble salt. As both positive ions (called cations) and negative ions (called anions) are released when an electrolyte dissolves, they can help maintain the balance between the charges in the cell, compensating for an excess of negative or positive charge from the metal plates. Without this balance, the battery cannot function.