The paper burns instead of just smoldering. What is wrong?

One should light the paper very carefully. In fact, you do not even need an open flame! You can use a smolder of an extinguished match or a splinter. Try touching it to the paper soaked with sodium nitrate – that should work!

Why isn't there any liquid in the vial, but a white thick residue instead?

You need to wait a couple more minutes: the white precipitate will drop down to the bottom, and a layer of liquid will form above. Sometimes this process takes a while.

Paper does not smolder: instead, it emits smoke and then extinguishes. What is wrong?

It seems like the paper is still a bit wet. Dry the paper completely – you may use a hair dryer to speed it up.

Finally, there might not be enough sodium nitrite solution applied on the paper. Try to outline your figure again or start your drawing over on a clear piece of paper and use plenty of solution. In any case, remember to dry the paper thoroughly.

Paper treated with sodium nitrate smolders well. As a result, the drawing burns out, while untreated paper remains intact.

Dispose of the experiment residues along with regular household trash.

Why does the paper treated with sodium nitrate smolder so well?

When a piece of paper treated with sodium nitrate is heated to above 300oС, the salt begins to decompose and releases oxygen:

The oxygen released supports the smoldering process more effectively than the oxygen in the ambient air, so the area of paper treated with the salt smolders quickly.

Paper burning and smoldering are reactions of cellulose (the main component of paper) with oxygen. If the temperature is too low or the amount of oxygen available is insufficient to support burning then the paper smolders, otherwise it burns.

When ignited with a match or touched with a hot charcoal, a small area of the paper treated with sodium nitrate is heated to above 300oС, which causes nitrate decomposition. The oxygen released supports smoldering, so the process keeps going along the drawing lines.

The rest of the paper does not catch fire because there isn’t enough heat for it. In order to ignite regular paper it needs to be heated to about 450oC. Since we do not reach such temperatures in this experiment, you can observe an interesting phenomenon – partial smoldering of paper.

How is oxygen formed?

In any nitrate – sodium nitrate NaNO3, potassium nitrate KNO3, calcium nitrate Ca(NO3)2, etc. – a nitrogen atom is surrounded by three oxygen atoms that pull electrons from nitrogen. In principle, such a particle is quite stable until additional energy is applied. When solid nitrate is heated, one of oxygen atoms can leave a molecule breaking its bond with nitrogen atom. Then this oxygen can form a couple with another released oxygen atom. 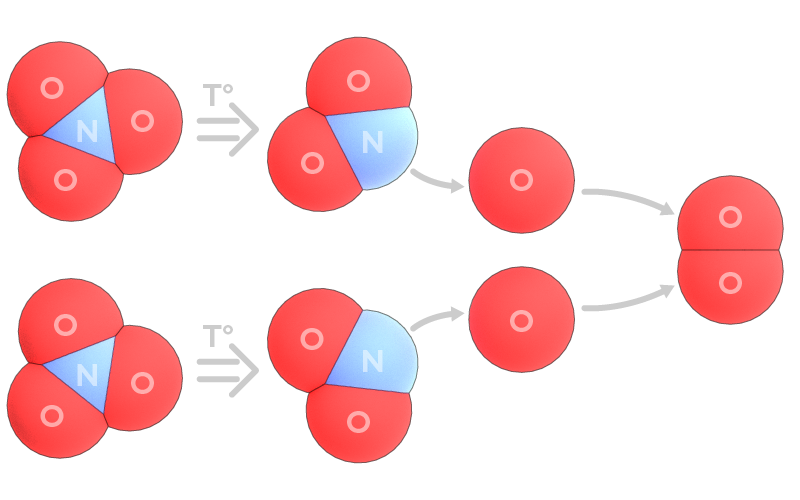 In such case where oxygen can easily escape in form of gas, sodium nitrite NaNO2 is a more stable compound than nitrate.

How is sodium nitrate produced?

First, calcium nitrate Ca(NO3)2 powder is mixed with sodium carbonate Na2CO3 solution, and a viscous mass is obtained. Further proceeds a slow reaction in this mixture:

Upon heating, this reaction significantly accelerates. As a result, a saturated sodium nitrate solution forms above the white precipitate of calcium carbonate CaCO3.

When the reagents are mixed, sodium carbonate and calcium nitrate dissociate into ions in the solution:

The resulting ions are uniformly distributed in the solution. However, they do not stay in place but keep moving and colliding with each other. Such movement of molecules and ions is called thermal or Brownian motion. When Ca2+ and CO32- ions meet they turn into a water-insoluble compound CaCO3 that precipitates out. Upon heating, particles in the liquid begin to move faster and collide more frequently. Thus, all the calcium ions find a pair and precipitate out in form of carbonate, leaving only sodium nitrate in the solution.

What substances can be used instead of sodium nitrate?

For this experiment, we can use any other substance that evolves oxygen when heated to a temperature below the flash point of paper (which lights in air only when heated to above 450oС). The best replacement of sodium nitrate is potassium nitrate (KNO3), a substance with similar properties.

Almost all nitrates release oxygen when heated. However, their decomposition reaction with release of oxygen takes different ways for salts of different metals. One way it goes for such metals as sodium (Na), potassium (K), barium (Ba), and calcium (Ca): upon decomposition, metal nitrite and oxygen are formed:

Furthermore, for mercury (Hg) and silver (Ag) nitrates, the decomposition reaction looks the same, but the oxides formed are unstable and therefore rapidly decompose into oxygen and metal. As a result, metal, nitrogen dioxide, and oxygen are formed:

Finally, ammonium nitrate should never be used for this experiment! Its thermal decomposition process depends on temperature. With insufficient heat, no oxygen is released in the reaction:

However, with enough heat provided, ammonium nitrate decomposition would cause an explosion:

There are also other ways to make paper smolder. For example, you can draw with concentrated nitric acid (HNO3). As a result, cellulose (the main component of paper) would turn into nitrocellulose, a highly flammable substance.

Other types of paper

For a start, try different types of paper for the experiment. For example, so-called craft paper would work quite well. Further, try filter paper, printer paper, and regular tissue paper. Guess what properties of paper have the greatest impact on the course of the experiment?

A miner’s fuse from a piece of string

If a paper impregnated with sodium nitrate smolders so well, is it possible to conduct the experiment with something else—for example, with a string? Sure, it is!

Take a small piece of string, jute twine or thick wool yarn: 15-20 cm would be more than enough. Do you still have the solution from the “Fire label” experiment? Add it into a plastic vial filled half-way with water. Immerse the string completely in the solution. Stir the vial contents with a plastic or wooden stick. Make sure that the entire string is well soaked in the solution (some types of strings may poorly absorb water). Close the vial with a cap and leave it for 15-20 minutes. Then, take the wet string out of the vial using a stick or tweezers. Put it on a paper towel and let it dry. It may take 2-3 hours.

Now you can make use of your fuse! The best way is to ignite the “fire label” with it. Be careful! Work on non-flammable surfaces only. Put the drawing (see the “Fire label” experiment) onto the flame diffuser. Connect the fuse to the paper or make a small hole close to the edge of the paper and pass the fuse through it. Now ignite the fuse! The flame extinguished? Not a problem, just light it again!

You can also light a match using such a fuse! After you have dried the piece of string, attach it securely to a match head. Put the match with the fuse attached onto the flame diffuser and ignite the end of the fuse. If it is well soaked with the solution, the fuse will successfully ignite the match!

Saltpeter is a traditional common name for all compounds of nitric acid with metals, such as potassium (K), sodium (Na), calcium (Ca), and barium (Ba).

As you know, the Earth's atmosphere consists of nearly 80% of nitrogen. However, nitrogen content in living organisms is about 2.5%, and in the Earth crust – only 0.04%. Nitrogen is a very important element for nutrition and growth of most organisms and plants. Nevertheless, only some bacteria species can assimilate it directly from the air and use for their needs. Plants accept chemically bonded nitrogen only (i.e. in form of chemical compounds) – they consume it from the soil. Active agriculture development contributes to rapid depletion of soils and reduction in yields. The problem can be solved with nitrogen fertilizers, the most important of which is sodium nitrate (NaNO3), or Chilean saltpeter.

In 1803, in Chile, in the middle of the arid Tarapaca province has been found the richest of sodium nitrate deposits, later called Chilean saltpeter. The first freight of this valuable mineral arrived in Europe in 1825… and it had been thrown away into the sea, for it found no use. Not for long, though, Chilean saltpeter remained without attention. Population of Europe kept growing, and so did the demand for food and other agricultural products. Active agricultural development necessitated the use of mineral fertilizers. At that time, industrial production of nitrogen fertilizers had not yet existed, so it created a massive demand for Chilean saltpeter. In 1830, Europe had been using 1,000 tons of natural sodium nitrate, and in 1870 – 150,000 tons. Even though the deposit had been gradually exhausted, in 1879 a real war broke out between Peru, Bolivia, and Chile for the territory of Tarapaca province. The Chileans won, and so they claimed their rights to own the land. Until the early XX century, natural sodium nitrate had been the main source of inorganic nitrogen. World deficiency of nitrates was tremendous. Not only they were fertilizers, but also a precursor for the production of nitric acid, an important component for smokeless powder invented in the late XIX century.

In 1904, a method for controlled synthesis of nitrogen oxides was invented. Unfortunately, it required enormous supply of energy. Again, natural nitrate remained the main source of fixed nitrogen for chemical industry and agriculture. Only in 1913, chemical industry became completely independent from the deficient natural resource, after the invention of method for capturing atmospheric nitrogen with ammonia.

Now, three quarters of chemically bound nitrogen is used for the synthesis of nitrogen fertilizers. Sodium nitrate is obtained in the production of nitric acid (HNO3) via the absorption of residual nitrogen oxides by sodium carbonate solution (Na2CO3).

In nature, potassium saltpeter forms when animal waste decays in the presence of limestone. A prerequisite for this process is warmth, so the largest deposit of this substance is in the East Indies.

Potassium nitrate (KNO3) is the main component of gunpowder, so humanity learned how to obtain it a long time ago. They digged special pits and put in them a mixture of manure and limestone layered with brushwood and grass. Then the pits were covered with turf and left for a few months. Rotting organics released ammonia, and soil bacteria turned it into nitric oxide. Further, it reacted with limestone to form calcium nitrate (Ca(NO3)2). Brushwood enriched with calcium nitrate was then removed from the pits and washed with a solution of wood ash, a source of potassium carbonate Na2CO3. The final step was the evaporation of potassium nitrate from the solution.