Fountain did not work. What is wrong?

Being collected in a flask, ammonia dissolves in water. The pressure inside the flask drops, and the liquid rushes up into it. This is how the fountain works!

Fill the tube with mixed substances halfway with water. Close the tube securely. Dispose of the experiment residues along with regular household trash.

How is ammonia formed?

Upon heating, a chemical reaction occurs in the test tube. One of the reaction products is ammonia, a colorless gas with a specific pungent smell.

Released carbon dioxide CO2 is then absorbed by calcium hydroxide:

These two processes may be summed up into a single reaction equation (see the first paragraph of this section). Hence, only ammonia NH3 (which is needed for our experiment) leaves the test tube.

Should you use ammonium carbonate only, it would decompose very slowly. Binding of carbon dioxide by calcium hydroxide prevents a reverse reaction, a synthesis of ammonium carbonate from the products of its decomposition. Thus, it helps to quickly collect the necessary amount of ammonia from the test tube.

Why does water start flowing into the flask?

Ammonia NH3 is highly soluble in water. And thus, some of the ammonia from the flask quickly dissolves in a drop of water on the tip of the plastic tube. As a result, pressure in the flask decreases, and water rushes in because of a pressure drop relatively to atmospheric pressure.

We do not feel the presence of atmospheric pressure because our bodies have adapted to life on the Earth's surface. In fact, though, a many kilometers thick atmosphere layer is constantly pressing on us.

The fact of atmospheric pressure existence is easy to verify. Prepare a large reservoir with water and immerse a transparent tall glass in. Let the glass fill with liquid. Then carefully turn the glass upside down and begin to raise it slowly, without taking the glass off from the reservoir. Water does not flow out from the glass because the atmosphere presses onto the water surface in the reservoir! In this case, atmospheric pressure is greater than the pressure of liquid in the glass, so the glass does not become empty. However, if you detach the glass from the water surface, the liquid will flow out and will be replaced with air.

In the cup with a thymol blue solution, atmospheric pressure acts on the surface of the liquid in a similar way. As soon as some ammonia dissolves in a drop of water on the tip of the tube, pressure in the flask falls below atmospheric. And then, the atmosphere can press the water into the flask through the tube, forming a fountain.

Creating an instant pressure drop in the flask is possible only because ammonia is highly soluble in water (about 700 liters of ammonia in one liter of water!). Very few gases would behave in a similar way at normal conditions. Carbon dioxide CO2, for example, is used for production of carbonated drinks. However, it takes of high pressure (above atmospheric) to dissolve a sufficient amount of it in water. That is why carbon dioxide forms bubbles when you open a bottle with soda.

The ability of most gases to dissolve in a liquid at elevated pressures can play a low-down trick with a man. Divers and deep sea expedition participants have to always keep it in mind. Water is much heavier than air, and at the 10 meters depth the pressure is twice higher than at the sea level. When a diver dives at great depths, gaseous nitrogen N2 dissolves in blood, which never happens at normal conditions. If a diver rises to the surface too fast, then the dissolved gas forms bubbles in blood vessels like it does in an open bottle of soda. This phenomenon is called decompression sickness and may lead to a very serious damage to the body including death.

Why does ammonia dissolve in water so well?

It is hard to imagine but we can dissolve up to 700 liters of ammonia in just one liter of water! Other gases can hardly compete with such characteristics. For comparison, only 30 mL of oxygen O2 can be dissolved in one liter of water, which is about 23 000 times less than in case with ammonia!

Why there is such a difference? In fact, ammonia molecules interact with water molecules and form so-called hydrogen bonds. These bonds are much weaker than chemical bonding, but they maintain gas molecules in dissolved condition. Moreover, there is also a chemical interaction of ammonia with water:

On the contrary, oxygen O2, similarly to other gases, does not form hydrogen bonds. In addition, oxygen does not chemically react with water.

What are these hydrogen bonds? It is quite a tricky question. Let’s try to find an answer without digging into complex scientific descriptions and calculations.

If comparing a regular chemical bond between a hydrogen atom and another atom with hydrogen bonding, the most significant difference is in the distance between the atoms forming a bond and the energy of this bond (i.e. the amount of energy needed to break the bond).

Interestingly enough, it is hydrogen bonding that makes water liquid at normal conditions.

Why is it so important not to turn over the flask?

Ammonia is about twice lighter than air, so it rises up. Ammonia from a test tube gradually accumulates in the flask and pushes air down. If you were to turn the flask upside down, ammonia would immediately fly away allowing for the air to replace it, and you wouldn't be able to continue the experiment with air.

Ambient air seems lightweight and weightless, but it is only a first impression. In fact, it has weight! If you put a vacuum-pumped closed vessel (in which air has been sucked out with a pump) on the one scale and another closed vessel with air on the other scale, it would be obvious that air weighs more than nothing.

In 1811, Amedeo Avogadro, a scientist, found out that equal volumes of any gases at the same conditions contain the same count of molecules. Later, this principle has been called Avogadro's Law, in honor of its discoverer. Thus, the heavier are the gas molecules, the heavier is the gas itself.

Some gases are very light. Helium He is one of the lightest gases. It is so lightweight that not only can it fly, but it can also lift something else. Thanks to this property, helium is used to fill balloons. The lightest gas, however, is hydrogen H2. Unfortunately, it is unsafe to use for hydrogen fun because it is extremely flammable.

Many gases are heavier than air, and quite often it causes disastrous consequences. Some settlements located in the lowlands surrounded by mountains have entirely died out because of natural emissions of toxic gases, such as hydrogen sulfide (H2S) and carbon dioxide (CO2). These gases are heavier than air. After breaking out from crustal faults or floating up from the bottom of a lake they displace air from above the ground surface, causing death of human and most animals.

One of the heaviest gases at normal conditions is sulfur hexafluoride (SF6), or Elagas. It is often used by nuclear physicists as an isolator in particle accelerators. Elagas is so heavy that if you "pour" it in a flat container and gently lower an aluminum foil boat on top, it would "float" on the gas surface. Sulfur hexafluoride is transparent, so it would create an impression that the boat is floating in the air.

Why does the liquid change its color?

Thymol blue dye belongs to a group of chemicals called indicators. Its solution changes color depending on the quantity of hydrogen ions (H+) in a thymol blue molecule. The indicator molecule has a very complex structure, so for simplicity we will use «Ind» to denote it. Thymol blue exists in three forms:

In the cup, the indicator is mainly present in the form of IndH-, making the solution yellow. It happens because there is a certain amount of H+ in the solution.

When ammonia is dissolved in water, the quantity of free hydrogen ions H+ decreases, because they prefer interacting with NH3 molecules rather than straying alone in the solution:

As a result, the indicator transforms into the Ind2- form, and the solution turns blue.

What other gases can we use to make a fountain?

Efficient gas solubility in water is an important condition for obtaining a fountain. Ammonia is a successful candidate: at room temperature, it dissolves in the amount of 700 volumes in one volume of water. Only its close relative, methylamine (NH2CH3), is more soluble in water. A fountain obtained with methylamine and water stained with thymol blue, will turn out just as well as an ammonia fountain. 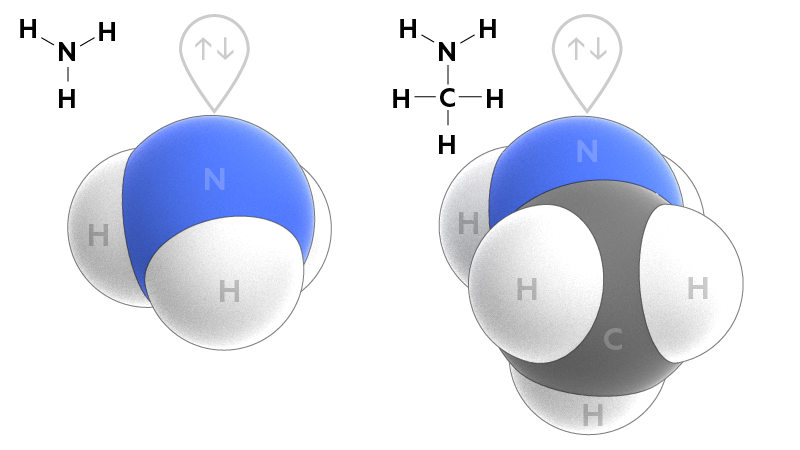