You can purchase hydrogen peroxide at your local drugstore. Look for concentrations ranging from 3–5%.

My experiment didn’t go as expected. What should I do?

Make sure that the splint is still smoldering when you lower it into the flask, and don’t let it touch the solution. 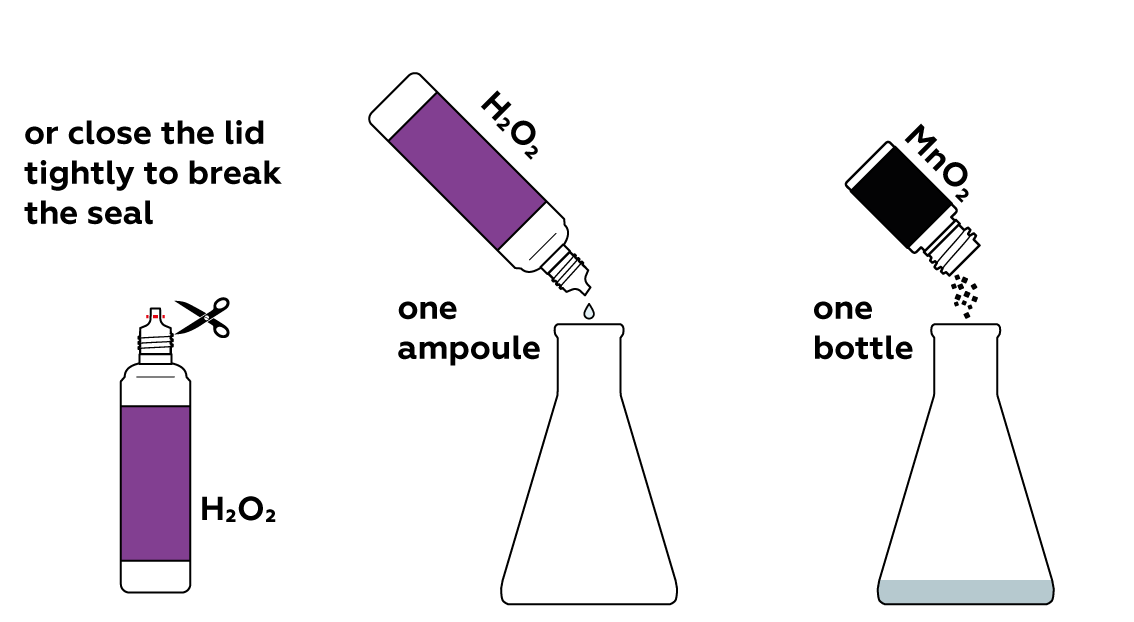 See what happens when a smoldering splint meets pure oxygen.

Sometimes, even in ideal conditions, it would seem that a reaction is proceeding too slowly or not at all. In this case, a catalyst is added to the reaction. A catalyst

is a substance that significantly increases the reaction rate. A catalyst helps reagents react with each other

, but isn't used up during a reaction.

The decomposition of hydrogen peroxide is a reaction that needs a catalyst. Although the bond between the two oxygen atoms

in a molecule of hydrogen peroxide

is rather weak, it will not break on its own. However, this bond breaks easily in the presence of a catalyst such as manganese dioxide. Very active particles

form and take part in a series of reactions. As a result, water

readily reacts with the organic compounds in wood

. Heat and light are emitted during this reaction. Only one-fifth of air is oxygen (the rest is mostly unreactive nitrogen

). Therefore, oxygen reacts with wood only on the surface of the splint, causing the splint to smolder. However, the flask contains almost pure oxygen, which helps the combustion reaction proceed more rapidly and emit more heat. Due to such a “heat stroke,” some flammable particles leave the splint’s surface and react with the surrounding oxygen, which is how the flame appears.

Why does the smoldering splint ignite?

Smoldering is a slow, flameless form of combustion – the organic substances on the surface of the splint are reacting with the oxygen in the air. Our splint smolders relatively slowly, and over time may cease to burn altogether.

However, there are several ways to increase the reaction rate of the smoldering splint. For example, we can increase the concentrations of the initial reagents. This is exactly why we put the splint into the flask filled with almost pure oxygen – we are surrounding the splint with a much higher concentration of oxygen molecules than can be found in air. This, along with the increase in temperature, dramatically speeds up the reaction rate, so the splint ignites with a bright flame.

Where does the oxygen in the flask come from?

The oxygen is produced via the decomposition of hydrogen peroxide as shown in the following reaction:

Why, then, can regular pharmaceutical-grade hydrogen peroxide be stored for long periods of time (up to three years if the bottle remains unopened) without any sign of decomposition? The secret is in the reaction rate. On its own, hydrogen peroxide decomposes very slowly. We can, however, make this reaction proceed faster by using special accelerators known as catalysts. Catalysts significantly speed up reaction rates – sometimes even by a factor of several million!

Why is hydrogen peroxide used to disinfect wounds?

The antibacterial effect of hydrogen peroxide is rooted in its decomposition. A fresh wound expels drops of blood. Blood, in turn, contains compounds that can accelerate the decomposition of hydrogen peroxide. Thus, upon contact with a wound, hydrogen peroxide decomposes and releases bubbles of oxygen. It’s important to note that this isn’t “regular” oxygen; these are not O2 molecules, but rather very active O∙ particles that eliminate any microbes in their presence. Upon colliding with each other, these same particles bond together to produce molecular oxygen O2:

Why did we add manganese dioxide MnO2?