The blue crystals didn’t turn white. What should I do?

It’s possible that something is wrong with your heating setup. Check that the candle is lit. Make sure that the foil form is in the center of the flame diffuser, and the lit candle is centered underneath it.

I have similar foil baking cups at home. Can I repeat the experiment using them?

Well, you can definitely try the experiment with your own foil forms, but we can’t guarantee the result. Keep in mind that you won’t be able to use them for baking afterwards! We strongly recommend using the foil form we provide — it should suffice to repeat the experiment several times.

Can I repeat the experiment after I add the water?

We do not recommend doing this, as the mixture of water with the CuSO4 can corrode the foil forms.

First, you’ll need to set up your stove. Don’t forget to apply a thermosticker so you know when it’s safe to touch!

You’ll need to heat your blue crystals to set the reaction in motion.

Give the crystals some time to heat up. What do you see?

Let’s try adding some water to the blanched crystals. What do you think will happen? 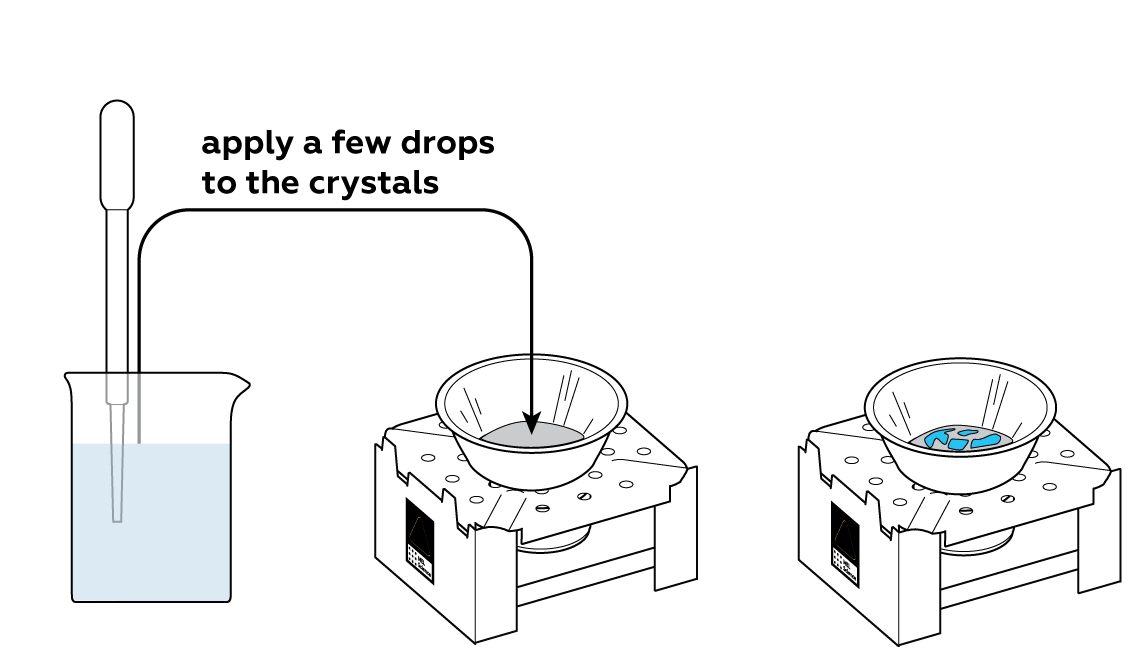 So you started with these pretty blue crystals, but what’s up with them changing colors when you heat them

? And why do they change colors again when you add water

As it turns out, these aren’t just any ordinary copper sulfate CuSO4 crystals—these unassuming blue crystals actually contain quite a bit of water H2O

. In fact, they have 5 molecules of water H2O

for every copper ion Cu^2+

! The scientific name for these crystals is “copper sulfate pentahydrate,” and chemists write their formula CuSO4·5H2O. The water molecules are an integral part of these crystals’ structure.

So when you start forcing the water molecules out of the crystals by heating them, it changes the crystals’ properties and turns them white! Now they’re just plain copper sulfate CuSO4

This is also why the crystals turn blue again when you add water—you’re putting back what you stole from the crystals in the first place. They happily take these water molecules back in and revert to their original blue CuSO4·5H2O

How can I make the copper sulfate turn blue again?

This actually isn’t hard at all! There are several options.

First, you can simply pour your anhydrous copper sulfate out into a plastic container (a disposable cup from the Starter Kit, for instance) and leave it uncovered for a period of time. The sulfate will work as a dessicant, gradually absorbing moisture from the air. With time, it will turn light-blue and then bright blue again, which indicates that the crystals’ composition is once again CuSO4*5H2O. This option is easiest, but it can take several days.

The second option is to slowly and carefully drip water right onto the white copper sulfate. Again, you can use a disposable cup from the Starter Kit. Be careful not to add too much water: the task is to saturate the copper sulfate with water, not to dissolve it!

Finally, the third option is to dissolve the anhydrous copper sulfate in water. Use a disposable cup to do this. You will obtain a blue solution. By the way, if you let the water slowly evaporate from this solution (at room temperature), blue copper sulfate pentahydrate crystals CuSO4*5H2O will form in the cup.

Obviously, there are many ways to turn the copper sulfate crystals blue again. Most importantly, the reaction is reversible, which makes it possible to repeat the experiment again and again, using different methods to obtain blue copper sulfate pentahydrate crystals.

What are crystalline hydrates? Why do they form?

Salts are substances composed of positively-charged metal ions and negatively-charged ions originating from parent acids. Some salts can form special adducts with water, which are called hydrates or crystalline hydrates. Essentially, an adduct consists of two or more parts. For simplicity’s sake, many compounds are called adducts to indicate that they consist of several components.

Unlike conventional salts, crystalline hydrates contain water, which is called crystallization water. Usually, hydrates form when salts crystallize from aqueous solutions. But why does water remain in the crystals’ composition?

There are two main reasons. First, as you may well know, highly water-soluble compounds (most of which are salts) dissociate into positively- and negatively-charged ions. Thus, the first reason is a special environment for the ions – an environment that consists of water molecules. As water slowly evaporates from a solution, the solution becomes more concentrated, so ions have to gather together and form a crystal. And sometimes, the ions can partially preserve their environment by dragging water molecules along into a crystal.

Ultimately, each ion is looking for a more comfortable place to stay. And this brings us to the second reason – as it turns out, ions are often much more “comfortable” with water molecules than with ions of the opposite charge (as in case with Na+ and Cl−). That is, a connection between ions and water molecules is stronger than a bond between ions within a salt. This property is more characteristic for positively-charged ions: in most hydrates, water stays in their surroundings. This phenomenon is caused by an electrostatic attraction between “+” and “−”, i.e. between the ions and water molecules. In a water molecule, the oxygen atom has a slight negative charge, while the two hydrogen atoms each carry a positive charge.

All crystalline hydrates decompose under heat. At temperatures above 100°C, water normally exists in the form of vapor. Such conditions thus force water molecules to leave their hydrates.