Create a reef in your Petri dish!

Why should I use a small Petri dish?

In the beginning, when using only 2 reagents, a small Petri dish will yield faster and clearer results. It’s better to use a bigger Petri dish when making new reefs with three or four different compounds.

I want to do this experiment again. What combinations should I try?

To learn more about different compounds and their combinations, please read the scientific description of this experiment. But we recommend trying ammonium iron(III) sulfate (NH4Fe(SO4)2) and potassium hexacyanoferrate(II) (K4[Fe(CN)6]). Their blue reefs are quite striking.

I decided to repeat the experiment with other compounds, but I didn't get any results.

It's great that you decided to try the experiment using other substances! Yes, this is possible for some pairs of compounds. Take, for example, CuSO4 and NH4Fe(SO4)2 or K4[Fe(CN)6] and Na2CO3. Combining these substances will only yield indistinct results.

When I repeated the experiment with the same compounds, I didn't get the result I was expecting. Why not?

This can happen if you reuse a Petri dish from a previous experiment without washing out leftover salt residues. This can make the results more ambiguous and less beautiful.

I stirred the salts and didn't get a beautiful reef.

This is normal, actually. Stirring the salts will impede the experiment.

Try the experiment again, but this time just pour the compounds on the bottom of the Petri dish and leave them for a few minutes. The salts will dissolve in the water and form a reef.

This reaction will take place in an aqueous solution. 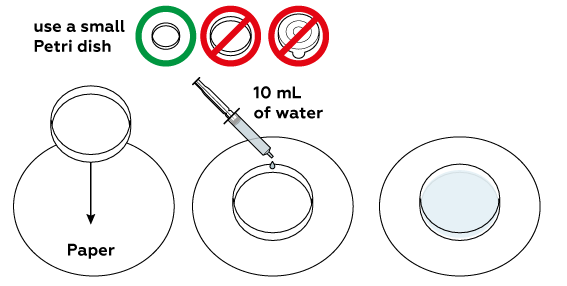 You will only need small amounts of the dry compounds.

Let the crystals dissolve in the water.

Where the dissolved compounds meet, a reaction takes place and a nebulous brown “reef” appears.

When you see a chemical formula such as CO2, you can guess that one molecule of the compound

(oxygen). Does a bottle of CuSO4 contain lots of CuSO4 molecules then? Not really. There's no such thing as a CuSO4 molecule; rather, this compound consists of two separate parts known as ions: Cu2+

. Compounds like this are called ionic compounds. When solid, their ions are packed together, but once in water, the ions can swim their separate ways.

Some combinations of ions, like CuSO4, break up easily in water (i. e. they dissolve easily), while other combinations are not so easily separated. When we put CuSO4

crystals in water, both of these compounds dissolve easily, but when Cu2+

ions in the middle of the dish, they stick together to form brown Cu2[Fe(CN)6]

particles, which are really reluctant to dissolve. That's what our glorious "reef" is made of.

Try combining different compounds and see which of them contain ions that can fit together to form "reefs". Blue Fe4[Fe(CN)6]3

How can we combine other compounds?

Try combining different compounds and see which of them contain ions that can fit together to form "reefs.” Blue Fe4[Fe(CN)6]3 reefs are especially beautiful!

We recommend pairing the following compounds:

What happens to these substances during the experiment?

They dissolve in water and split into ions.

First, the chosen substances dissolve in water. As they dissolve, they split into ions, just like the aforementioned copper sulfate. This is the case for each substance we deal with:

The ions spread through the solution

We don’t aid them in this – but the ions really want to spread all throughout the solution. This phenomenon is known as diffusion.

The ions meet one another and, in some cases, a precipitate forms:

copper sulfate + sodium carbonate - a light-blue precipitate of (CuOH)2CO3 and some other precipitates;

Diffusion in the living world

Two key processes in living organisms rely on diffusion – respiration, and nutrition. For example, as we breathe, oxygen and carbon dioxide molecules enter and exit blood cells via diffusion.

Let's learn a bit more about the role diffusion plays in breathing.

Amphibians, reptiles, birds, and mammals use lungs to breathe. Animals’ lungs vary widely in appearance, but their working principle is the same in both amphibians and humans – through the diffusion of gases into and out of their blood.

First, air enters the lungs and mixes with the air already inside. It comes into contact with the moist thin walls of the pulmonary vesicles, the alveoli, and permeates the blood vessels. In the blood, oxygen binds to the iron in red blood cells and is transferred with their help to all the cells of the body.

All gas transmissions from cell to cell are conducted via diffusion. This is also known as transmembrane transport because the process involves crossing cell membranes to get from one cell to the next. The diffusion of oxygen and carbon dioxide happens simultaneously, but in opposite directions – each gas will tend towards the side that harbors less of it.

Unfortunately, there are gases that bind to blood cells more strongly than the oxygen from the air. Take, for example, carbon monoxide CO, a toxic gas released during combustion. Carbon monoxide binds to the hemoglobin in blood better than oxygen and can stop oxygen transfer, preventing it from reaching blood cells and causing suffocation. This is what makes people suffocate in the midst of a fire or when a car engine is running in a closed room. Therefore, after people are evacuated from a burning building, they are given oxygen masks with oxygenated air to restore the oxygen content in their blood.