Copper wire glows in the dark!

The copper wire does not glow. What should I do?

First, try to wait a little. The wire glow is not too bright—perhaps, your eyes have not yet accommodated for the darkness. By the way, maybe it's too light around you? Remember that the darker the environment, the more spectacular the experiment!

Second, try dipping the wire in the solution again and rub it a little against the bottom of the beaker. Most likely, it will help.

Third, perhaps oxide film doesn’t cover the wire thickly enough. Anneal the wire on a gas burner or turbo lighter. Copper reacts with oxygen and forms copper oxide (CuO), which we need for a reaction to proceed.

Finally, you may add 5 – 10 more drops of luminol solution into the beaker. Stir the mixture and repeat step 6 of the instruction.

Still does not work? Perhaps, hydrogen peroxide H2O2 is a little “exhausted” and is no longer suitable for the experiment. Please substitute it with a 3% medical hydrogen peroxide solution sold at your local pharmacy.

Please contact our support if you have any questions about this experiment.

Attention! Part of this experiment (starting from step 5) should be performed in the dark: the darker the environment, the more spectacular the ghost copper experiment. Arrange a suitable environment prior to starting the experiment. Prepare 3% hydrogen peroxide H2O2 solution.

Copper helps hydrogen peroxide H2O2 to oxidize luminol. As a result, a solution of luminol and other components forms a thin layer on the copper wire. And this residual layer glows in the dark.

Pour solutions down the sink. Wash with an excess of water.

Why does the wire start glowing? 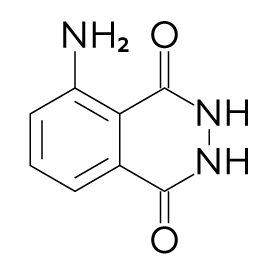 Luminol is a unique compound. Under certain conditions, oxidation of luminol leads to emission of light – a flow of numerous highly active particles called photons that we can see with our own eyes.

Why does the glow appear on the wire? In fact, a necessary condition for luminol oxidation is the presence of a substance capable of withdrawing electrons from luminol, strictly one by one. Copper suits this purpose perfectly. But since it is insoluble in water, the reaction can take place only under direct contact with the metal. Thus, the wire is glowing because the luminol oxidation reaction occurs on its surface.

What is happening with copper?

The glow on copper wire occurs both in and outside of the solution (for some time). What could explain such an effect? All the necessary "actors" for luminol oxidation are able to reach the copper surface. If the wire is still in the solution, an exchange can happen between the molecules on the copper surface and the molecules floating freely in water. Therefore, emission sustains for a long time. However, taking the wire out stops this exchange and therefore aborts the reaction, so the glow gradually fades.

How does the electron exchange proceed on the surface of copper? Note: for the glow to happen, the wire should be rubbed on the walls of the vessel. This is done to "expose" the copper surface, which otherwise is covered with a thin layer of cupric oxide CuO. After that, copper can react with the particles approaching it.

How does this happen? Imagine the surface of a copper wire: it consists of interconnected copper atoms. 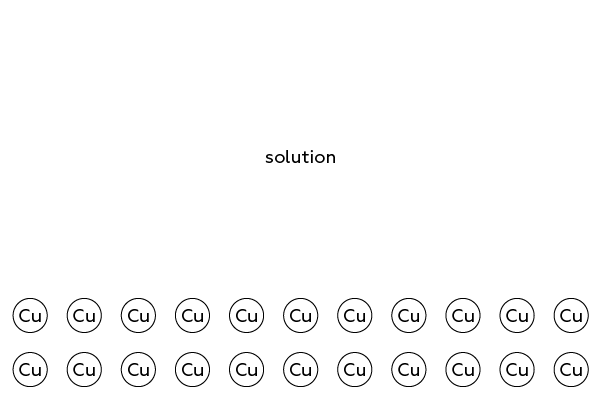 When a copper atom gets "annoyed" with the boring monotony of a metal cell, it decides to "explore" the area to meet new molecules, such as water. Thus, the copper atom leaves the cell in form of a Cu+ ion, leaving its electron inside the wire. 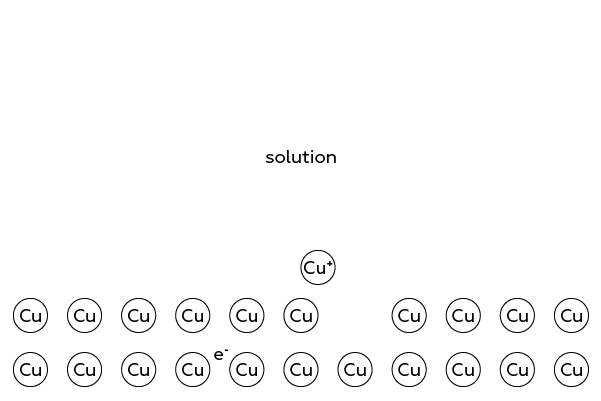 However, the copper ion cannot and does not want to leave its "brethren" far behind. And therefore, it actually travels within a thin (in fact, only one atom in thickness) layer close to the surface of the wire. Indeed, there are many such "stray" ions on the copper surface. 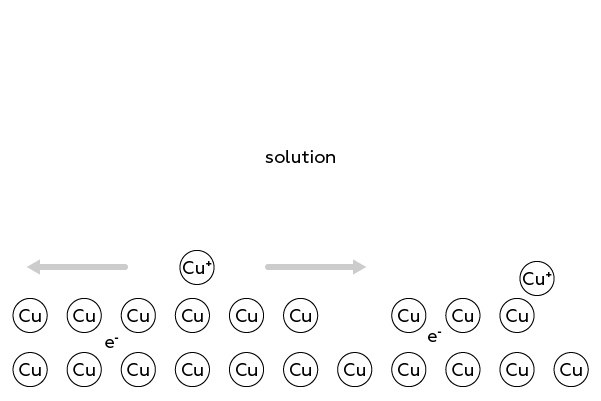 When this copper ion comes across a particle capable of donating electrons (such as luminol), Cu+ transforms back into Cu0 and returns to its "comrades" – into the metal cell. Luminol gives two electrons to copper ions. An "extra" electron is taken by hydrogen peroxide H2O2. Having done so twice, hydrogen peroxide turns into two hydroxyl anions OH–: 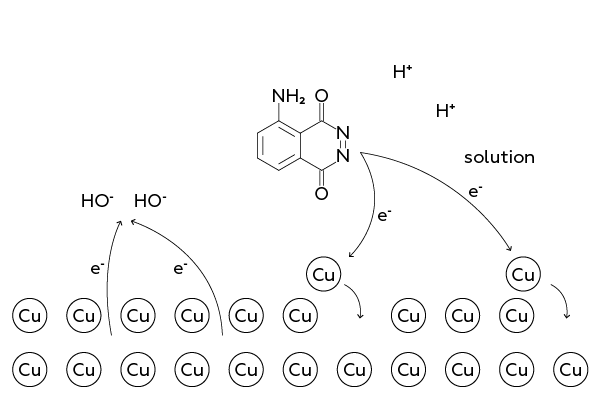 All these processes occur on the metal surface. Therefore, it is important that the reacting substances, including luminol and hydrogen peroxide, have the possibility to contact with the copper.

What is the role of hydrogen peroxide?

Hydrogen peroxide H2O2, as well as water H2O, consists of hydrogen and oxygen. However, oxygen inside it feels not as cozy as in water, and it is trying to get out of that state. Therefore, hydrogen peroxide may act as an oxidizer. It is this hydrogen peroxide that eventually oxidizes luminol. It excites luminol and makes it glow.

What is sodium carbonate needed for?

Hydrogen peroxide H2O2 may not be the weakest oxidizer, but it needs a special environment to accomplish its task. Everything has to be prepared carefully, and all the actors should be in their places to catch the luminol by surprise! And sodium carbonate here is one more character, thanks to which the reaction may occur.

The oxidation of luminol by hydrogen peroxide, which ultimately leads to luminescence, occurs only in an alkaline environment, i.e. when there is an excess of OH– ions in the solution. This environment is created by sodium carbonate Na2CO3.

An alkaline environment in the sodium carbonate solution is due to the fact that carbonate ions CO32–, which are obtained by dissolving the compound, can react with water. The reaction produces hydrocarbonate HCO3– ions and desired OH– ions:

Why do we use copper?

Because copper is able of taking electrons away from luminol, one by one. Most metals prefer to dissolve and form double-charged cations, providing two electrons:

However, copper is able to donate one electron and to stop there, transforming into the Cu+ form. This property is also characteristic of all alkali metals, such as sodium Na or potassium K. But they do so too actively, and thus their reaction with water causes intense heating or even an explosion.

Nevertheless, such single-electron exchange is also characteristic of silver:

Therefore, it is also suitable for this experiment. Note that other metals also contribute to the glow, but it would be weaker than in case with copper or silver.

Conduct the experiment with several different coins, so that you can compare the results. You will not need to prepare a new solution: all the necessary components are already in the beaker.

Take a coin and soak it in the solution using tweezers, forceps or another convenient tool. Rub it against the bottom of the beaker. Do not forget to conduct the experiment in the dark!

Take a coin out of the beaker. Does it glow? Compare different coins. Find out what metals were used in coinage (a process of coins manufacturing) of each of the coins you took for this experiment.

A nail, a paper clip, and other objects

Conduct the experiment again with different metal objects. You can use the solution you got from the “Ghost copper” experiment. Try using:

Were you able to see the glow? Was it weaker than in the case with a copper wire? Why was it so, what do you think? Share the results of your experiments on Facebook (https://www.facebook.com/melscience): let’s discuss them!

Which other substances can make copper glow?

In our case, a copper wire begins to glow due to a specific luminol oxidation reaction, in which copper acts as an accelerator (catalyst). However, there are other ways to make a copper wire glow. Though, it will serve only as a metal framework, without participating in the processes that occur on its surface. For this purpose, instead of chemiluminescent substances that glow because of chemical reactions, we can use photoluminescent materials that glow because of their exposure to other light sources. The phenomenon of substance luminescence due to the influence of a light source is called photoluminescence. There two types of photoluminescence: fluorescence and phosphorescence.

For instance, recall bright “poisonous” green or orange clothes that surely draw attention: you may even feel a bit dazzled by just looking at them. This brightness is explained by the composition of these fabrics: it includes substances capable of absorbing visible light. It causes their transition into a high energy, or so-called excited, state. Further, they “calm down” by emitting the light back.

Interestingly, this light is bright and warm in most cases: orange, green, and rarely blue. The phenomenon is called fluorescence. Light emission occurs almost immediately after it's been absorbed by a substance. Such substances are called fluorescent. For example, we can paint the copper wire using a solution of one of them, and it will glow.

If you place a fluorescent substance under a UV lamp, the glow becomes much brighter. In fact, the amount of energy received by substances from a UV lamp is greater than that from a usual light source. However, even though fluorescent substances have very curious properties, they also have an important drawback: until they receive light from somewhere else, they cannot emit light.

We may recall popular children's toys that glow in the dark. The composition of these toys also includes substances capable of absorbing light and then releasing it. Emitted light has the certain color (usually green). An important difference of such substances from fluorescent compounds is that they can “recharge” from light sources and then gradually release accumulated energy, instead of doing so instantly (as it happens with fluorescent compounds). These substances are called phosphorescent. They can also be applied to a wire, and it will make it glow.

Finally, you might have heard of white phosphorus, a waxy substance that also glows in the dark. In the 19th century, this property of white phosphorus was extensively used for various tricks and “spooky” effects. Recall, for example, the resolution of the Baskervilles Hound mysteryan investigation by brilliant Sherlock Holmes in the story by Sir Arthur Conan Doyle. Villain used white phosphorus!

However, white phosphorus does not glow itself. It glows because of an oxidation reaction. The substance that takes away its electrons is oxygen in the ambient air! That is why it seems like white phosphorus can glow on its own. Luminescence phenomenon, which occurs due to a certain chemical reaction, is called chemiluminescence. We could also put this substance on a copper wire to make it glow in the dark, but we will not. White phosphorus is extremely poisonous (poor Hound of the Baskervilles!), and even professional chemists, provided with all the safety features, tend to avoid working with it.