Learn to draw using a diode!

Will the experiment work with other LEDs?

Well, the answer is usually “yes.” But your results will vary widely!

A red LED actually won’t work at all. A green LED will work poorly, but you’ll be able to see the drawing appear gradually. A blue LED will work nicely. A UV LED will yield the best result of all.

But why do they differ? In brief: the light they emit is a form of energy. The different color of each LED represents a different amount of energy being emitted. As it turns out, the reaction that reveals the drawing requires that a certain amount of energy be transferred to the reagents.

When I added the ammonium carbonate (NH4)2CO3 solution, the mixture began to bubble. Is this normal?

Yes, that's totally normal. The reaction yields carbon dioxide CO2, which you can observe as bubbles.

The mixture that I obtained turned blue. Is this okay?

If the whole mixture has turned blue, this likely means that you’ve overexposed it to light. But don’t worry! Just discard this plastic cup and start over. When repeating the experiment, keep in mind that the experiment must be performed in very dim lighting.

And if the mixture turned greenish? It will still work, but the image won’t be as contrasted.

Can I use ordinary paper for this experiment?

Unfortunately, ordinary paper is rather thin and tears relatively easily. We recommend using the watercolor paper provided in the set. The set contains enough paper to repeat the experiment several times.

Make sure that the crocodile clips are clamped to the metal, not the insulation. And finally, try changing the batteries (and be sure to mind the polarity)!

I’m trying to draw, but nothing much is happening. What should I do?

You have to move the diode very slowly to give the reaction time to happen. Try drawing more slowly. If that doesn't help, replace the batteries – maybe the LED isn’t shining brightly enough to initiate the reaction. Don't forget to disconnect the LED after use! The batteries heat up quickly.

The whole paper is blue. What now?

It seems like your paper was exposed to too much light! This might be due to sunlight, or to using the LED for too long, or because the lights in the room where you performed this experiment are too powerful! Try to reduce any bright lighting and repeat the experiment.

You will be dealing with light-sensitive reagents, so you'll need to avoid bright light, such as direct sunlight.

To draw with light, you need, well, a source of light. The LED from the set will work just fine.

Apply your light-sensitive mixture to a sheet of paper. 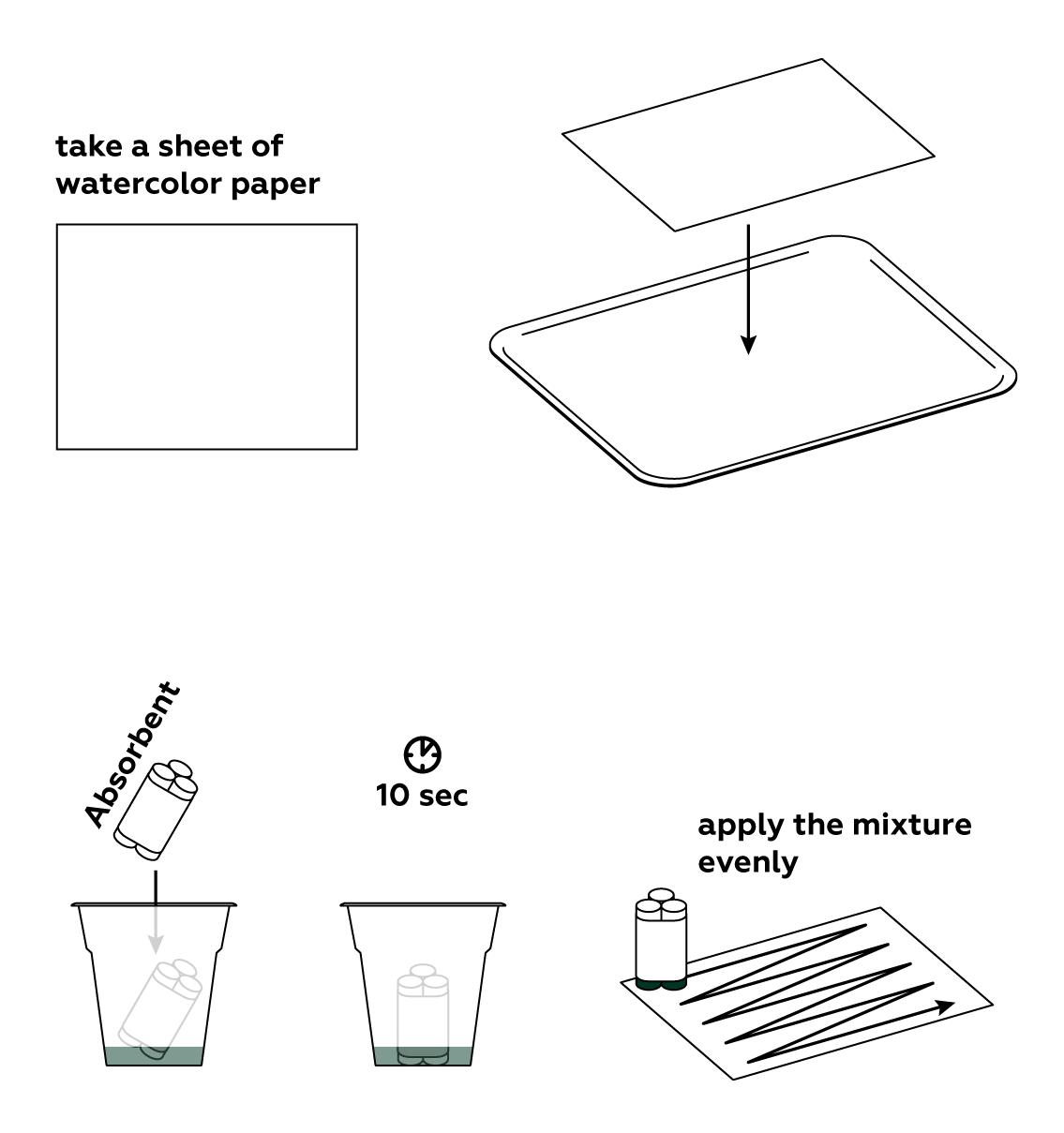 In order to preserve your image, you need to remove any unreacted light-sensitive mixture from the paper.

from ammonium iron(III) citrate, it initiates a reaction in which Fe3+

, turning (or, as chemists say, reducing) into Fe2+

. But the product of this reaction is not yet visible, and that’s where potassium hexacyanoferrate(III)

comes into play. It doesn’t stick to Fe3+

, it forms an insoluble, intensely-colored compound

called Prussian blue. This is what we see when we look at a cyanotype image.

Nowadays, this technique of "drawing with light" is used mostly by hobbyists to print photos or even decorate clothes. But in the second half of the nineteenth and early twentieth centuries, it was commonly used to copy technical drawings. That’s why architectural plans and technical drawings are still often called blueprints.

What is in the photosensitive mixture?

We obtained our photosensitive mixture by combining three key components:

What role does light play in chemical reactions?

To start, what is light? It is a form of energy that many substances can absorb. When we talk about the energy absorbed by a substance, we mostly mean that electrons in some of said substance’s atoms receive this energy.

Therefore, electrons get excited by this “power-up” and perform something that we can call an “electron jump.” In most cases, such a jump ends with a simple emission of the excess energy back into the surrounding area in the form of heat. This is why, for example, dark-colored objects (which absorb a lot of light) heat up quickly in sunlight.

But there is another way to release that energy: the powered-up electrons can jump from one atom to another, resulting in chemical changes. In other words, the light itself initiates the chemical reaction!

Processes that are powered or chemically influenced by light are known as photochemical reactions. One of the most well-known examples of such a reaction is photosynthesis in plants – one of the building blocks of organic life on Earth.

Why does the inscription appear?

The light from the LED initiates a series of reactions. Iron(III) ions Fe3+ interact with citrate ions. They receive one electron and are reduced, transforming into iron(II) ions Fe2+, while citrate ions are oxidized:

Is the color of the LED important?

A red LED actually won’t work at all. A green LED will work poorly, but you’ll be able to see the drawing appear gradually. A blue LED will work nicely.

But why do their effects differ? In brief: the light they emit is a form of energy. The different color of each LED represents a different amount of energy being emitted. As it turns out, the reaction between iron(III) ions and citrate ions requires that a certain amount of energy be transferred to the reagents.

Why doesn’t the drawing wash off of the paper?

The Prussian blue obtained in the experiment isn’t soluble in water. It settles firmly on the surface of the paper, while the unreacted mixture is easily washed away.