Is how I draw the line important?

It is important that your line start at one edge of the sheet; the black crocodile clip needs to be able to connect to the graphite line. The line should be unbroken from start to finish.

First, make sure that the batteries have been properly inserted into the battery holder. If everything has been set up correctly but the LED still isn’t working, try changing the batteries.

Finally, if the diode still doesn’t light up, apply an additional layer of the mixture, retracing the first line. Make the line thick, with no gaps.

If none of the above worked, try another diode from the experiment set.

You can also let us know — we’ll figure it out together!

The LED is barely glowing. Is everything okay?

Dimming the lights will make it easier to see the LED glowing. Try touching the bent leg of the LED to different places on the graphite line. You will notice that the closer the bent leg is to the black crocodile clip, the brighter the diode glows. Don't be afraid to experiment!

To make liquid wires, you need to mix graphite with liquid glass. It's actually the graphite that conducts electricity—the liquid glass simply helps keep the graphite powder together in a thick paste. 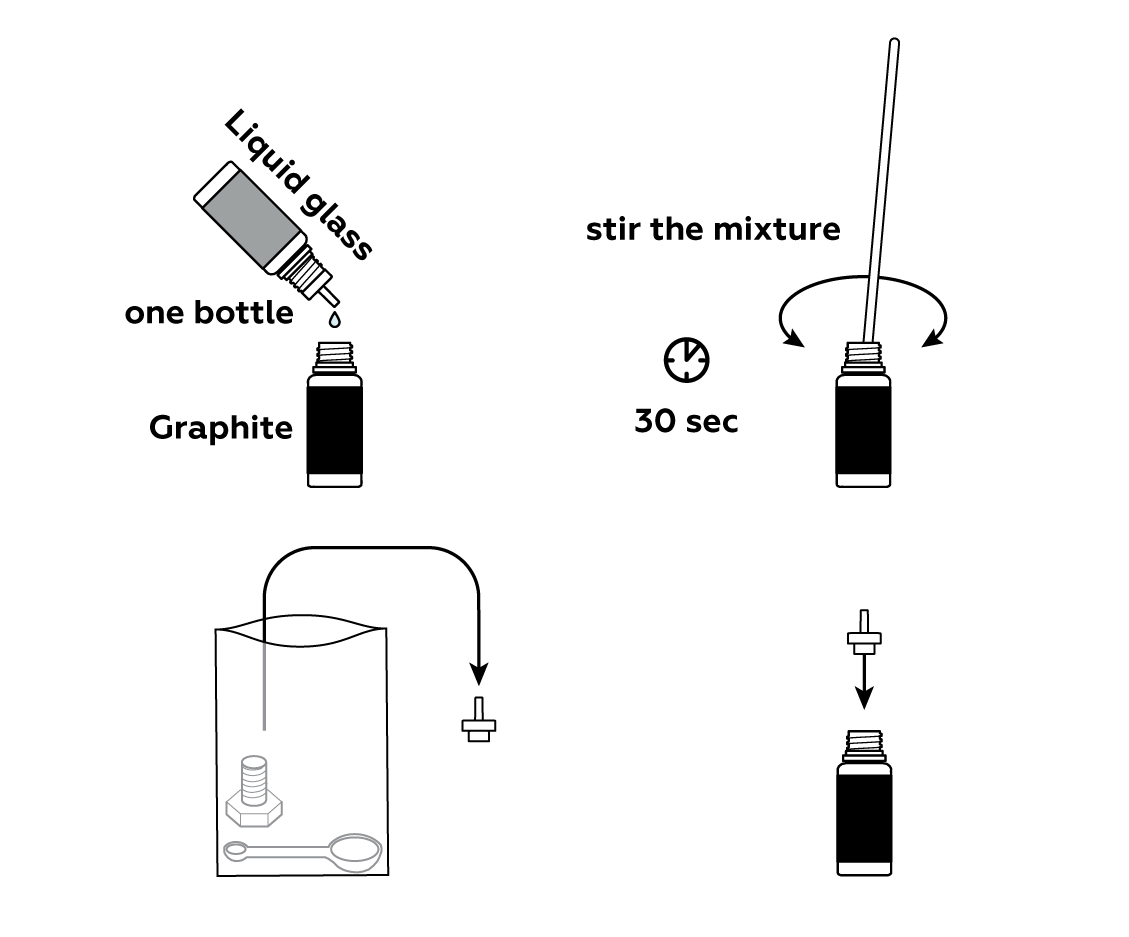 You can use the bottle nozzle to apply the "wire."

Attach the longer "+" leg of an LED to your battery holder. You can also use the batteries you make in the other experiment from this set. 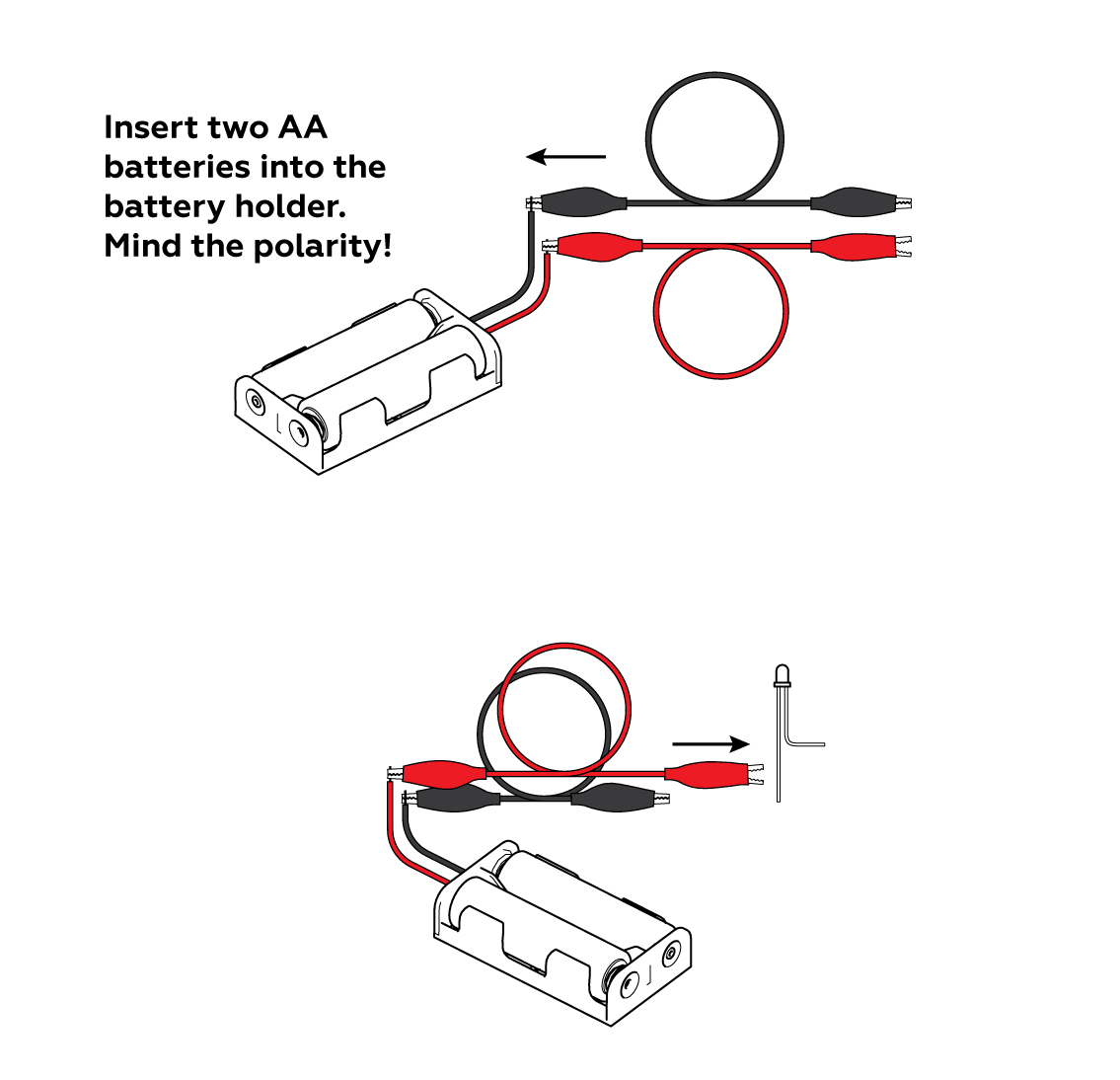 Connect the black "-" crocodile clip to your conductive drawing and touch your drawing elsewhere with the bent "-" leg of your LED.

As you can see, your drawing conducts electricity quite well, but the longer and thinner the path connecting the "-" crocodile clip with the "-" LED leg, the worse the connection is. That's because the liquid wire has quite high electrical resistance. Regular metal wires also have electrical resistance, but it's much, much lower. If your wire were made of copper, you'd need a really long piece of it to dim your LED as much as a mere couple of inches of the liquid wire does.

Please refer to local regulations when disposing of chemicals. Dispose of other solid waste with household garbage.

How can a liquid wire conduct electricity?

Every electronic household appliance relies on an electrical system: to work, it needs an electric current flowing through it. For current to be able to flow through such a device, it needs a good conductor – a material that transmits electricity well. These conductors are usually metal wires, as metal wires can easily transfer electrons (tiny negatively-charged particles) from one place to another and circulate electricity through the appliance.

But metals aren’t the only materials that can transmit electricity well! Graphite can also act as a conductor. This experiment revolves around mixing graphite with sodium silicate Na2xSiyO2y+x solution, also known as liquid glass.

Even a small graphite stripe or pencil mark can conduct electricity, but such “wires” are not thick enough to be good conductors. The liquid glass acts as a glue that both thickens the liquid wire and helps the graphite fragments stick to each other. Touching the diode to this wire closes the electric system, and the diode glows as electric current flows through the circuit.

This mixture can be transferred onto any flat surface, but it must always be continuous – the system should be closed with a single touch of the diode!

How can graphite conduct electricity when it’s not metal?

Graphite is made of carbon atoms, and carbon is a non-metal. So how can it act as a conductor?

Graphite can act as a conductor thanks to its unique layered structure, which gives its electrons the opportunity to move more freely than they otherwise would. This structure is very important – diamonds, which are also made up of carbon atoms, cannot act as conductors because they aren’t constructed this way!

Interestingly, graphite’s conductivity also depends on the direction the electric current is moving: current can flow along graphite layers thousands of times more easily than perpendicularly to them.

What else can we make wires from?

Wires are primarily made of metals due to their superior conductivity. Silver is the best conductor of all the metals, but its high price limits it to select applications within electronics. It and gold are used as contacts in toggle switches and tiny microchip wires. Copper is common in home electrical systems, but its price and mediocre tension resistance can be problematic at larger scales; power lines have wires made of cheaper steel, compromising slightly in terms of heat loss.

But what about liquid wires?

Some electroconductive glues contain silver particles – when the glue dries, the layer becomes conductive. They are used to fix some electric circuits, like car window heaters, where you can't change the wires. Sometimes metal isn't present in the solution in its metallic form, but rather is dispersed as ions. The metal layer is then forced to precipitate from the liquid using chemicals or even lasers. This might seem overly elaborate or exotic, but you hold a device made like this in your hands every day – your smartphone! The antenna in your smartphone was likely made exactly this way: at some point, metal ions were deposited on a plastic component to form a solid metal coating capable of capturing radio waves.