Make a liquid crystallize with a light touch!

The sodium acetate crystals in the test tube didn’t melt. What should I do?

Take the test tube out of the beaker, open it, and add 1 mL of water. Then continue heating. Now the crystals should melt.

There are still non-melted crystals at the bottom of the test tube after I heated it for 15 minutes.

No problem! Just continue heating the test tube for another 5–10 minutes or until everything has melted.

The bottom of the test tube deformed! Is that bad?

This is normal – the test tube can warp slightly at high temperatures. Keep going; this won’t affect the experiment!

While the test tube was cooling down in the flask, crystals began to grow at the bottom.

I touched the liquid in the test tube with the stick, but nothing happened. What went wrong?

The liquid may not have cooled down completely. Wait 10 minutes and try touching the solution with the stick again. If nothing happens, repeat the experiment from the beginning.

Can I repeat the experiment with the same test tube?

Yes; the acetate in the same test tube can be melted and cooled multiple times.

Prepare a stick with sodium acetate CH3COONa · 3H2O crystals adhered to it. You’ll need it at the very end of the experiment. 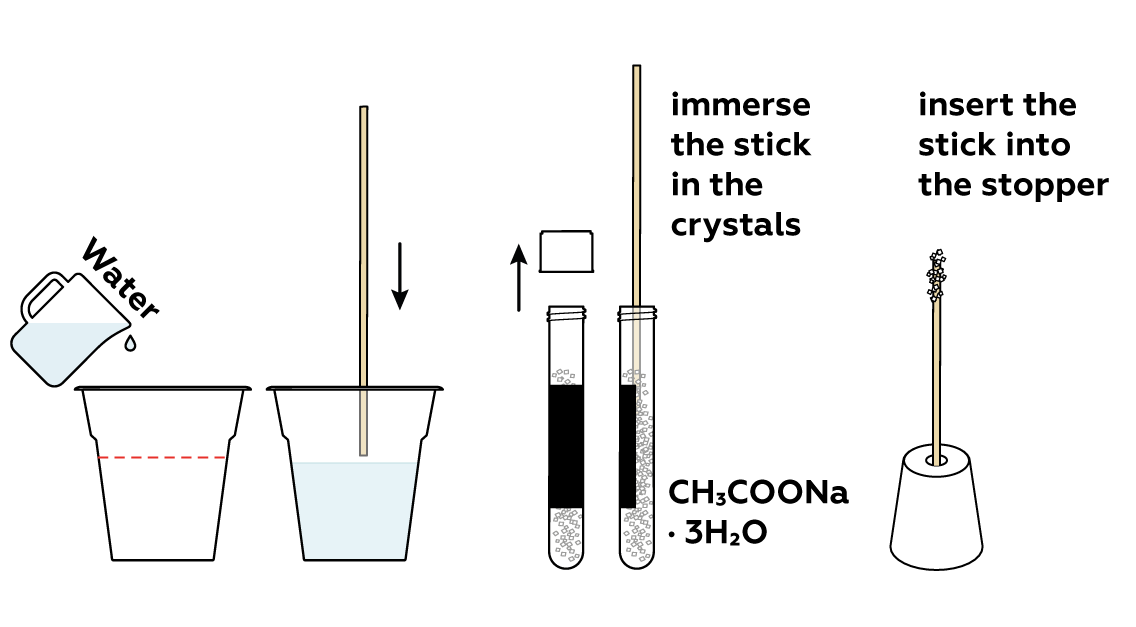 Add some water to the rest of the sodium acetate CH3COONa · 3H2O crystals. This will help them to melt.

Now, build a heated bath to melt the crystals. 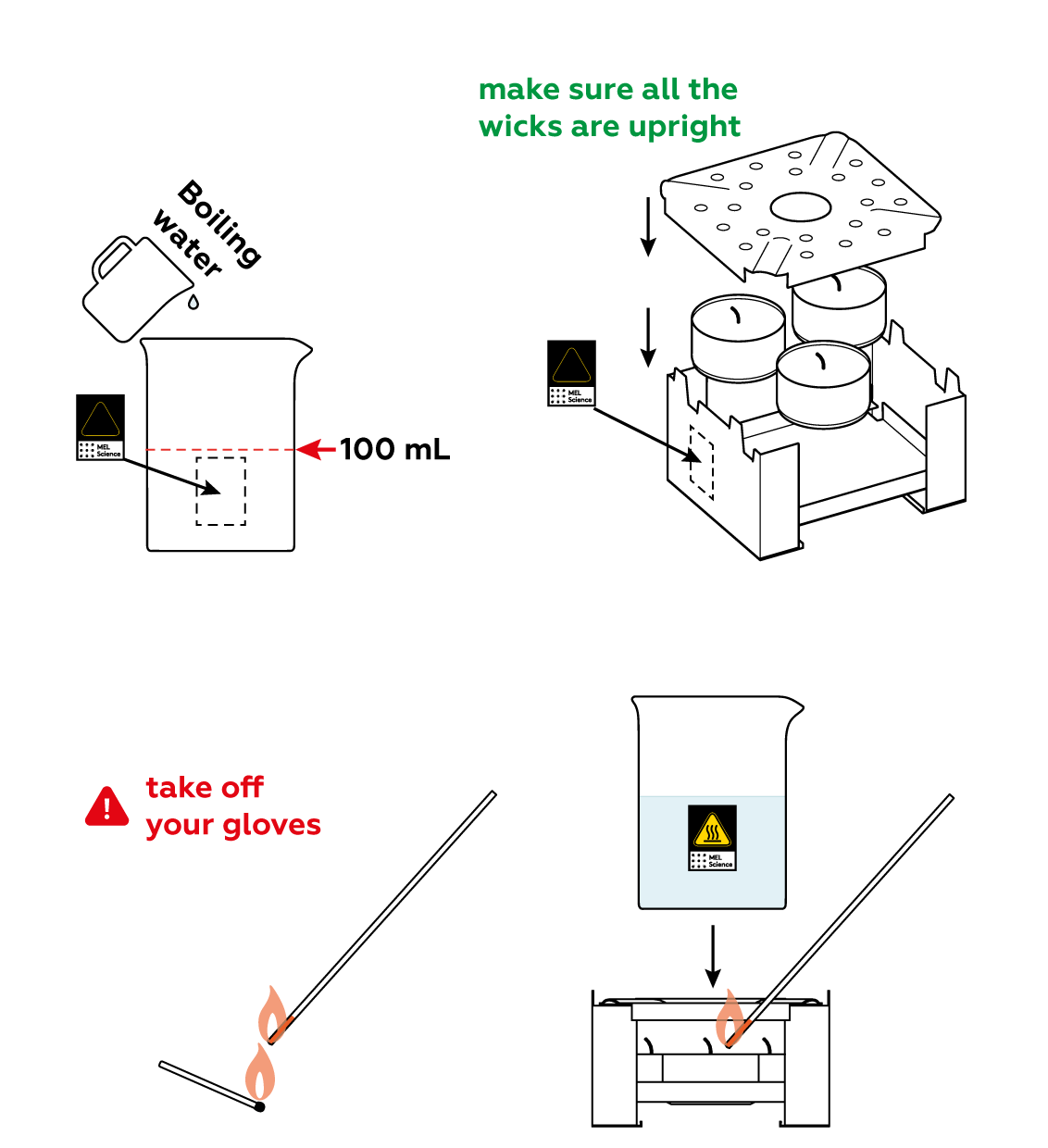 Place the test tube in the glass beaker and watch what happens! The crystals melt as they absorb the heat you’re providing.

Cool the test tube quickly and carefully. At first, nothing seems to be happening. But just a soft touch of the stick triggers rapid crystal formation! And the test tube heats up dramatically. 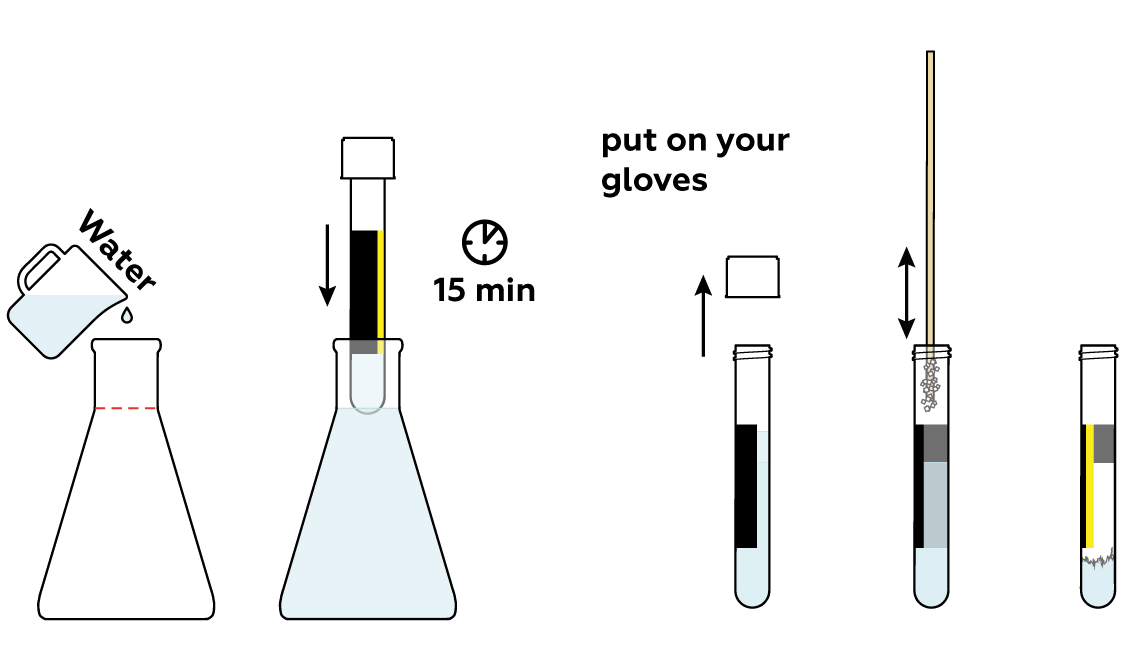 You can conduct this experiment several times! Just repeat steps 3–5.

constituting any substance aren't just sitting still—they’re constantly vibrating and bouncing around. The intensity of this movement is what we call "temperature," i.e. the faster the particles are moving

, the hotter the substance is

. When you heat the sodium acetate crystals

, the particles have a difficult time sitting still

—they start to vibrate intensely

and abandon their fixed "seats," eventually so much so that the crystals

turn into a liquid

When you cool the resulting liquid

, the particles slow down

. It would seem that they're ready to settle down and form a crystal

again, but there’s just one problem—they don't “remember” how to group. But you can “remind” them! You have some crystals on a stick, which can serve as an example to the particles trying to rebuild their crystalline structure

When a liquid is cool enough to crystallize but remains a liquid nonetheless, we call it a "supercooled liquid." This state is usually quite unstable, and not only actual crystals, but even a speck of dust can "remind" such a liquid to turn into a crystal.

Can water be supercooled too?

Of course! You can even try to do it at home. Check it out!

For this purpose, you will need to put a half-liter (one pint) bottle of purified water in the freezer for about three hours. When you take it out of the freezer, be gentle – the water is ready to turn into ice! Hit the bottle against the table or shake it and see how quickly it freezes!

Have you already tried it? Watch this video to see what other cool tricks you can do with supercooled water!

If supercooled liquids exist, can superheated ones exist too?

Any substance can exist in one of three states: solid, liquid, or gaseous. For water, these are ice, water, and vapor. As a rule, at normal pressure, the transition from one state to another occurs at a certain temperature: water turns into ice at 0 °C (32 °F), and becomes vapor at 100 °C (212 °F).

However, as you already know, there is an exception to this rule. When gently cooled below their freezing point, the particles that make up a liquid slow down but do not settle into their solid form. But can a liquid be just as gently heated above its boiling point and not start to evaporate? Turns out, it’s possible! And such a liquid is indeed said to be superheated.

In liquids, particles move chaotically and relatively quickly, while still remaining quite close to each other. When heated to their boiling point, they begin to move even faster and detach from the surface of the liquid, turning into a gas. However, if the liquid is heated very carefully, the particles in it will move as fast as in a gas, but will not “dare” to leave the surface. When such a liquid is disturbed, ripples form on its surface, upon which the particles instantly “realize” that it is high time for them to scatter. This phenomenon sometimes occurs when water or milk is heated in a smooth, clean cup in the microwave for a long time. The liquid can seem tranquil at first, but once something like a spoon or a tea bag is immersed in it, the disturbance can trigger the liquid to boil vigorously or even explode! If hot droplets land on the skin, they can cause serious burns, so be careful when heating liquids in the microwave for extended periods of time!