This experiment is included into Zinc-carbon battery kit along with Liquid wires. Subscribe and get everything you need to do this experiment at home.

I can’t insert the graphite electrode/funnel/cotton cylinder into the silicone tube.

All of these items should fit snugly in the tube. Don't be afraid to apply more force if need be. You can also try using another graphite electrode or cotton cylinder. And, of course, you can always ask an adult for help.

What should I draw on the clock dial?

You can draw anything you want – let your imagination run wild!

The clock isn’t working. What should I do?

If you have assembled the two batteries and connected them correctly to the LED, but the LED isn’t glowing — don’t worry! This is probably easy to fix.

First of all, try switching the wires. Electric current can only run through an LED in one direction. Make sure the crocodile clips are clamped to the metal, not the insulation.

If none of these steps help, try using a different LED or assembling a new battery.

Is it OK to use regular batteries instead of the ones we make in this experiment?

We do not recommend connecting regular batteries to the LEDs from the kit. This could potentially result in the LEDs overheating and/or malfunctioning.

Mix manganese dioxide MnO2 with graphite C. MnO2 is going to "pull" electrons from zinc Zn, while graphite will allow the electrons to travel through the mixture.

Insert a graphite electrode into a silicone tube. This will be the battery body.

Pour some of your MnO2 and C mixture into your battery cartridge. 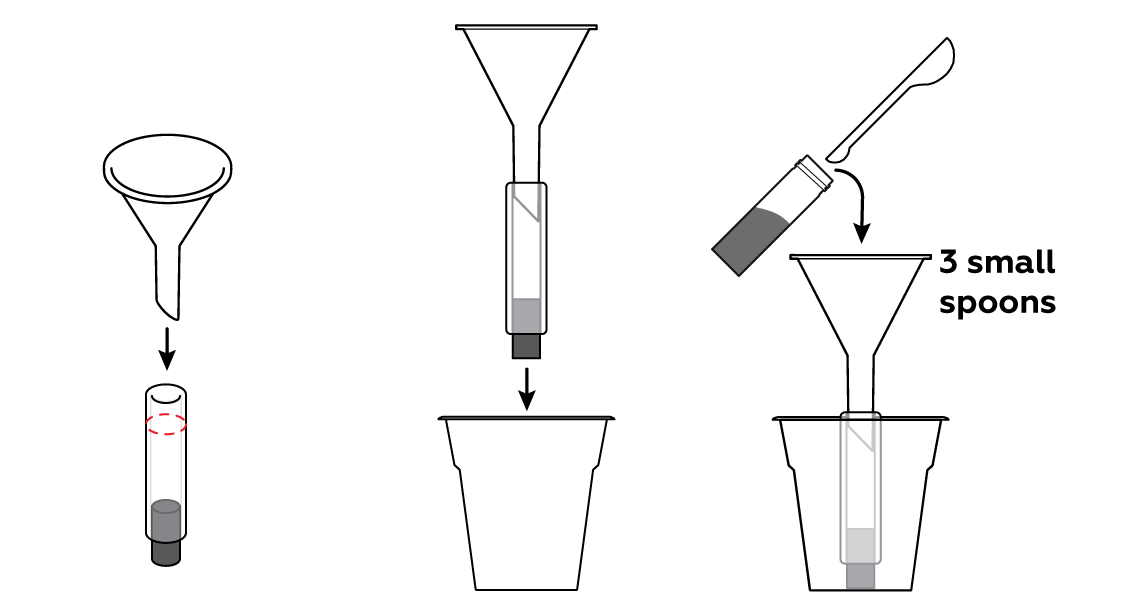 Put a cotton cylinder into the cartridge and soak it with ammonium chloride NH4Cl solution. Then insert a bolt plated with zinc Zn—and your battery is ready! 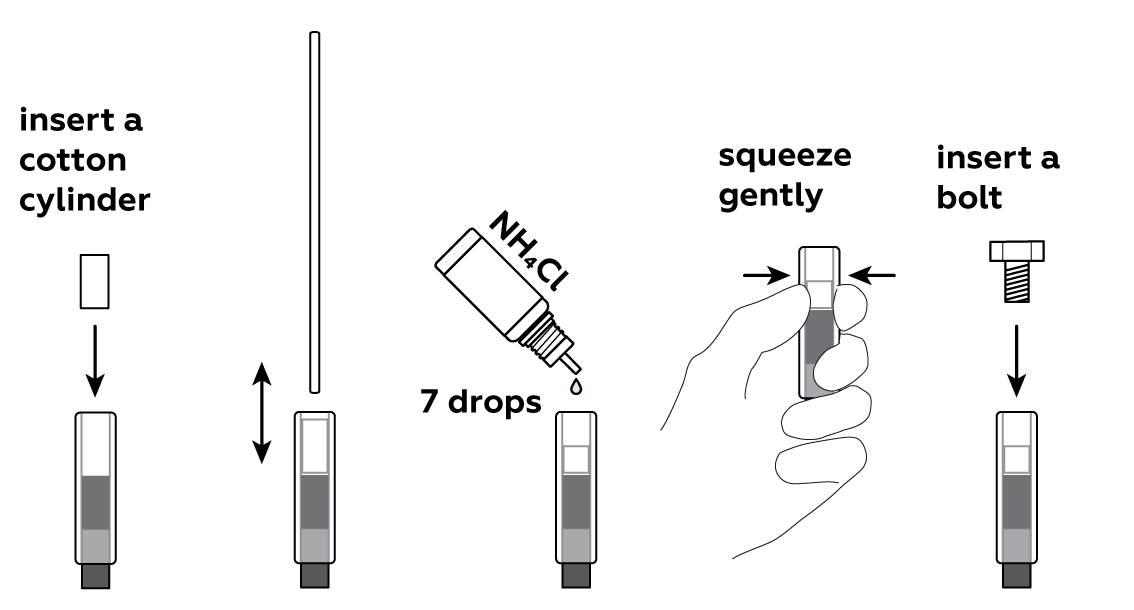 Zn is keen to give its electrons e- away. Electrons are negatively charged, and that's why the Zn side of the battery is marked "-". MnO2 is willing to take the electrons that zinc gives away, and its side is marked "+". The electrons can't pass through the cotton or the NH4Cl solution, however, so they need another route.

With this battery, you can power your own clock! You can also decorate your clock however you like.

Unlike the NH4Cl solution, the clock's internal workings do allow electrons through. But their passage isn't free: in return, the electrons make the clock tick. That's how all electrical devices work. 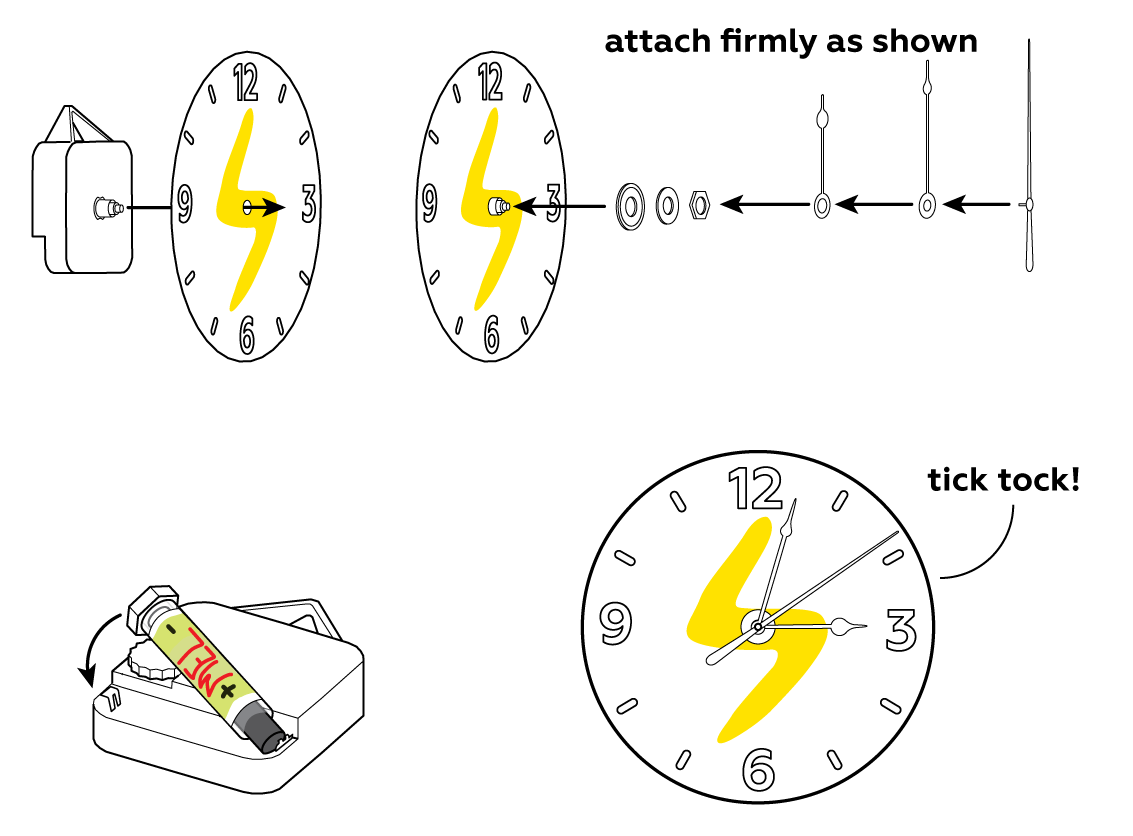 You can assemble another battery by repeating steps 2–5 and use them to power, say, an LED.

If the electrons go from zinc Zn to manganese dioxide MnO2, can't you just put the "+" wire of your device

in some MnO2 powder

As soon as a negatively-charged electron leaves zinc Zn

, the latter becomes positively charged and wants to pull the electron back. That is, unless it can get rid of its charge. And that's where the solution of ammonium chloride NH4Cl

can release the positively-charged Zn2+

particles into the solution, and thus get rid of its charge. Something similar happens with MnO2

. To become uncharged, it ultimately gives its oxygens O

particles are charged, but they, unlike electrons, can move freely in the solution, so they spread out and mix in the NH4Cl soaked cotton, making it evenly uncharged too.

There are countless ways to make chemicals work to move electrons in wires and this one isn't the simplest. But your battery is chemically identical to commercially produced zinc-carbon batteries. The reason for that is the fortunate combination of readily available ingredients and the lack of free flowing liquids in the construction of the battery and the absence of gaseous products of the reaction.

How do zinc-carbon batteries work?

Such a battery (also called as zinc-manganese or manganese battery) is a chemical source of electric current that relies on an oxidation-reduction (redox) reaction between manganese dioxide (MnO2) and zinc powder (Zn). Such a reaction involves the transfer of electrons from one element (the reducer) to another element (the oxidizer).

Our battery is divided into two sections, separated by wadding: one section holds the oxidizer MnO2, and the other contains the reductant Zn. When the battery isn’t connected to anything, these isolated substances cannot react with each other. But when the crocodile clips are connected to a diode, the circuit is closed and the reaction can begin: electrons start migrating from the zinc section to the manganese section. They move from the bolt through the springs and the black wire to the diode (which starts glowing!), then continue on through the red wire, and finally through the graphite rod to the manganese dioxide (MnO2) section.

Why do we need the graphite powder?

The battery will work only if the electric current can flow “unobstructed,” so the agents inside the battery must be able to conduct electricity very well.

Unlike graphite, manganese dioxide MnO2 is not a good conductor, but a mixture of MnO2 and graphite powder is a fine conductor for such a battery.

Why do we need the NH4Cl solution?

Ammonium chloride NH4Cl is primarily intended to be a source of protons H+ that can balance out the electron excess in the manganese dioxide MnO2 section.

At the same time, chloride anions Cl- balance out the electron shortage in the zinc section.

Also, on the zinc side, the reaction creates Zn2+, which readily forms insoluble compounds in these conditions. If these compounds accumulate, the electric current will eventually just stop. Once again, ammonium chloride comes to the rescue: the ammonia NH3 obtained during the reaction forms a compound with Zn2+ that is easily soluble in water.

What are ordinary batteries made of?

What is the difference between zinc-carbon and alkaline batteries?

How can I tell a “salt” battery from an alkaline battery in a store?

“Salt” and alkaline batteries have different markings. Battery markings (a few letters or numbers on the housing) usually consist of one or two letters and numbers. The numbers designate battery type in terms of shape and size. AA and AAA batteries are marked 03 and 6, respectively. The numbers are preceded by letters; R for “salt” batteries, and LR for alkaline batteries. For instance, an alkaline AA battery will be marked LR03. Lithium batteries are designated by the letters CR. If you have a battery with the first two letters SR or PR – you’re in luck! This means you’re holding a rare silver or zinc-air battery.

What devices can zinc-carbon batteries power?

Generally speaking, any device that needs electric power can run on zinc-carbon batteries. However, a small battery won’t be enough to power, say, a fridge or a washing machine. Zinc-carbon batteries can power small gadgets, such as flashlights, motors in toy cars, clocks, and watches.

The zinc-carbon battery that we assemble can power an LED, a watch, or a small calculator. Such gadgets only require a small amount of electricity to function reliably.

How long do such batteries work?

Usually, a battery similar to the one we assemble provides sufficient energy to make an LED glow intensively for 2–3 hours. If you make an effort and assemble it with extreme precision, such a battery can work for up to 10–12 hours!

What is the difference between our battery and a store-bought battery?

Chemically, our battery is exactly the same! The main difference is in the batteries’ general structure. In a commercial zinc-carbon battery, the oxidant (MnO2) and reductant (Zn) layers are much thinner, but they are wide and the surface of the membrane (in our case, wadding) is much larger. Such a battery can produce a stronger current than ours, which is why it can power a wider variety of devices (powerful flashlights, TV remotes, children’s toys, computer mice). Furthermore, such a battery is airtight and doesn’t let the electrolyte (ammonium chloride solution NH4Cl) inside evaporate. In our case, the evaporation of the electrolyte solution is the main reason why our battery runs down so quickly.