This experiment is included into Diffusion kit along with Chemical reefs and Diffusion through plastics. Subscribe and get everything you need to do this experiment at home.

I've waited 15 minutes, but my fingerprints still haven’t appeared. All I can see is a large, round, dark print on the paper.

The fingerprints look like smudges with no distinct patterns. What did I do wrong?

Getting a good print isn’t easy, even for a born detective! If your fingers are too greasy, the fingerprints will appear as amorphous and ambiguous stains. Wash your hands and dry them thoroughly. Rub your forehead slightly with the fingers you want to take fingerprints from. Then rub your fingertips together. Press your fingers firmly on the paper for 2-3 seconds, but try not to move them along the paper, otherwise the image will smudge. Try to develop these new fingerprints with the iodine vapor from the disposable cup.

Nothing appeared on the paper. What should I do?

First of all, make sure that the mixture in the plastic cup is brown. If not, try adding some more СuSO4 crystals and KI solution. Then put the paper on top of the cup again, fingerprint side down. The colder the room, the slower the iodine will evaporate: if you’re working in the cold, try giving the reaction a bit more than 15 minutes. If nothing happens, try the experiment again from the beginning.

Can I try this experiment with ordinary paper?

Yes, of course, you can try using ordinary white paper for this experiment.

Can I save these fingerprints?

Unfortunately, you won't be able to easily keep the prints looking good for a long time. Iodine is a volatile substance and it will evaporate quickly. 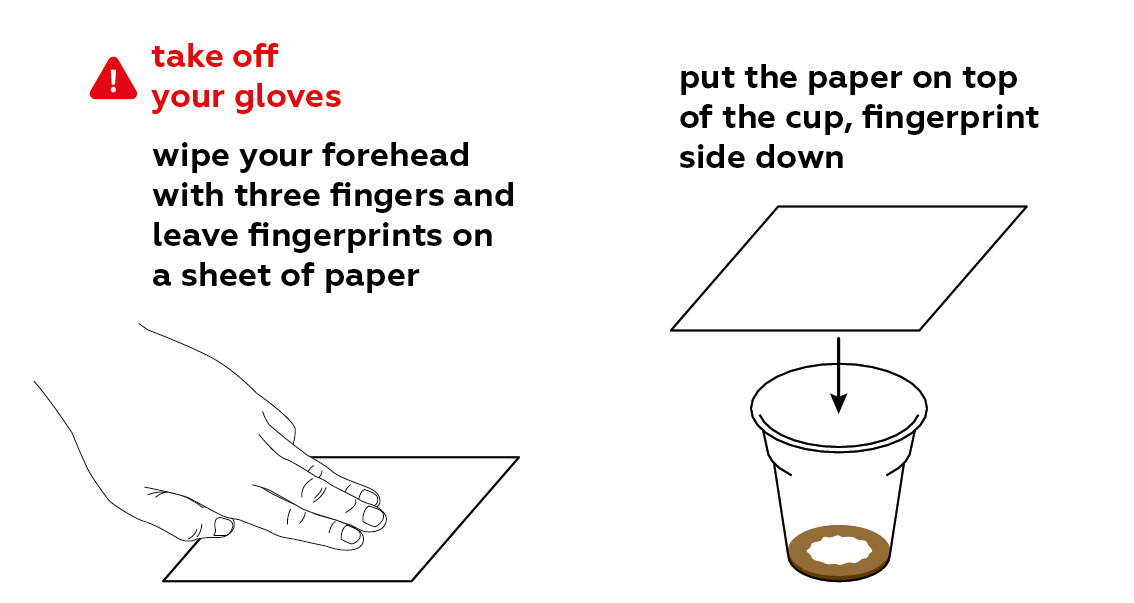 In the solution, both of these initial substances split into ions:

The copper ions Cu2+ oxidize the iodide ions I– by taking an electron:

The color of the fingerprint is determined by the presence of the molecular iodine that binds to the oils in the secretions from the skin. However, these bonds are rather weak — the iodine eventually sublimes. This causes the fingerprint to discolor over the course of about 15–30 minutes.

Your fingerprint will eventually fade as the iodine disappears. The same process can be observed with iodine on the skin. It is often used as a disinfectant for scrapes and cuts, and many people think that the iodine stain on the skin disappears as the iodine is absorbed by the body. Indeed, a small fraction of the iodine molecules are absorbed, but the majority simply sublime directly from the surface of the skin into the atmosphere.

This reaction yields iron iodide (FeI2), which is a stable reddish-brown compound. Due to its propensity for such reactions, iodine cannot be used to reveal fingerprints on metal surfaces, as it would react with the metal and obliterate the fingerprint rather than reveal it.

Try to reveal fingerprints on a piece of white cloth instead of paper!

Forensic science encompasses a number of different methods that can help investigate crimes! The more clues a detective can find, the more successful an investigation will be. It is crucial to collect, preserve, and analyze everything that can reveal the details of a crime. Any objects of interest are studied in a laboratory. And chemistry plays a critical role in this work!

As each person’s fingerprints are unique, finding and developing fingerprints can aid an investigation quite a lot! And using iodine, as you did in the experiment, is a method that real forensic scientists apply in their work!

But what if forensic scientists need to find other clues aside from fingerprints? UV light can help, too. Applying this light to a crime scene can help reveal traces of blood, saliva or other materials of organic origin invisible to the naked eye!